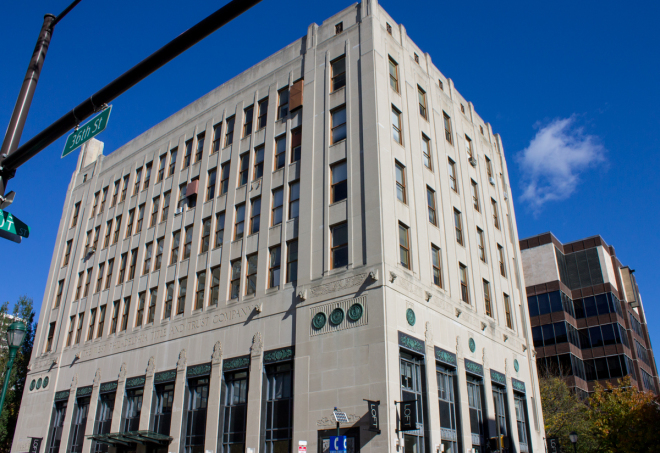 It is no secret that the University of Pennsylvania has had a broad influence on the growth and development of Philadelphia. Many campus buildings, however, were never meant to be part of the university but were absorbed by its expansion. These include mansions, office buildings, factories, and, notably, the former headquarters of the West Philadelphia Title Trust Company at 36th and Walnut Streets.

In a sense, this building is here because of World War I. Only a few years after the Great War had begun the Kappa Chapter of Theta Chi Fraternity moved to an old mansion at 36th and Walnut that had previously been used as offices of the Tacony Iron Company. During the war, Penn men who met the age and physical requirements for service were sent to the war. All fraternity houses were commandeered by the U.S. Government as quarters for soldiers in training. In October 1918 the fraternity chapter temporarily dissolved and ceded its house to the University of Pennsylvania. 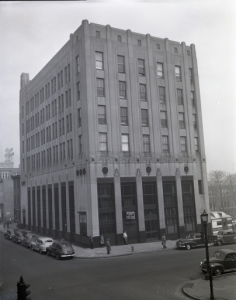 The university held on the old building for a few years, using it as housing for graduate students. In the middle of 1924, the corner location caught the interest of the president of the West Philadelphia Title & Trust Company, who was eager to expand his company from its ornate but outdated headquarters at 40th and Lancaster where it still stands today into a modern branch office. This new building, proposed as the “Walnut Street Office” was planned to be a catalyst for growth in the neighborhood, which was at the time primarily residential with the exception of the university to the south and east. This prominent location at the northeast corner of 36th and Walnut would give the relatively small building a huge presence. At the time, there were no tall buildings beyond it.

The company acquired the old mansion and its twin next door to make way for the new building. They commissioned the firm of Davis, Dunlap, and Barley–former students of Paul Phillipe Cret–who came back with an six story office building with an Art Deco façade of limestone and granite. Details on that façade show the influence of Cret’s tutelage through its elaborate stone carvings executed by Joseph Bass.

Construction started in 1925 and upon its opening in September, 1926, the building proved highly successful not only as a bank branch but as commercial office space–something sorely needed in this neighborhood at the time. The success of the office space led the West Philadelphia Title and Trust Company to commission the firm of McIlvain & Roberts to build a small addition on the east side of the building. This expansion–completed by the end of 1928–ruined the building’s symmetry on its Walnut Street frontage.

But with the addition under way the company found itself in financial dire straits. On March 1, 1928, the Integrity Trust Company bought out West Philadelphia Title & Trust. Integrity took over the building and renamed it the “36th Street Office.” The company commissioned Paul Phillipe Cret, who had just designed its new space on the 700 block of Chestnut, to add new bronze facade details on 36th Street. Integrity Trust would control the property until the company dissolved in 1940. The building was then sold to the Richard J. Seltzer Inc. real estate firm. 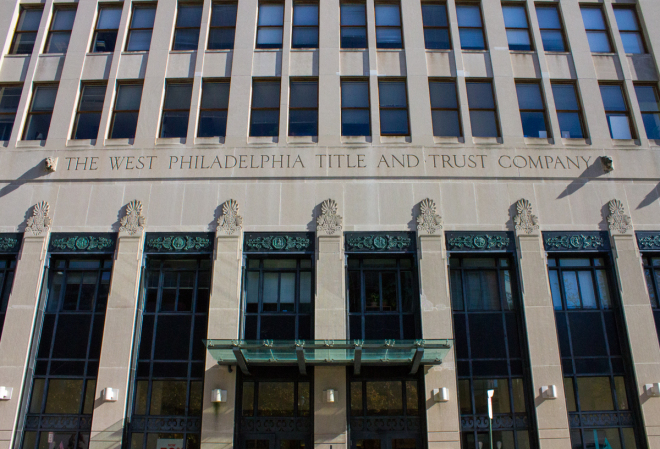 During the period Integrity Trust controlled the property, the American College of Physicians, the Biomedical Research Foundation of the Franklin Institute, and the Tax Institute of Penn’s Wharton School of Business shared the upper floors with other organizations. By the mid 1940s, two of those organizations, the American Law Institute and the offices of the American College of Life Underwriters, came to dominate most of the building. The few university offices in the building at the time would unwittingly signal Penn’s lasting occupation.

The folks of the American Law Institute, in their own words the “leading independent organization in the United States producing scholarly work to clarify, modernize, and otherwise improve the law,” stayed in the building until moving to their unfortunate-looking current headquarters at 4025 Chestnut in 1965.

On February 6th, 1967, the Girard Trust Bank’s University City office opened on the ground floor. The grand opening was hosted by Homecoming Queen Emilie Huggins and offered all new accounts a chance at winning electronics such as portable televisions and clock radios. Penn students and staff were eligible to receive a checkbook cover emblazoned with the university’s seal. The new bank’s first account belonged to Biblical Archeology Professor James B. Pritchard. 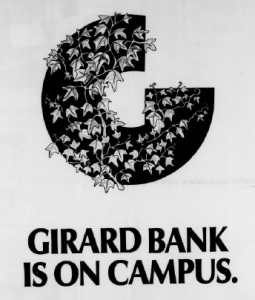 On April 29, 1968, the Society of African and Afro-American Students (SAAS), based at the university, staged a protest in front of what was now known as the Girard Bank Building. They blocked the doors and condemned Girard Trust and the other companies and organizations in the building for having no black employees. They claimed that a two-month investigation proved that the firms inside were discriminating against blacks for employment. After a heated confrontation with the police–three weeks after the assassination of Dr. Martin Luther King and just before Philadelphia Mayor James H.J. Tate declared a ban on all public gatherings of over 12 persons–the SAAS members were convinced by two black Penn Law students to end their protest and take legal action against Richard J. Seltzer, Inc instead. Their efforts were successful and the group went on to lead further protests in the coming years.

The Girard Trust Bank became Girard Bank in 1970 and the upper floors of the building were dedicated to a long list of different Penn offices over the coming two decades. Even after the bank went through mergers and name changes–eventually ending in 2002 as a Citizen’s Bank–the building was still known as the “Girard Bank Building.” Finally, on December 1, 1987, the university purchased the building for $790,901. Along with an Ann Taylor store on the ground floor in the bank’s old space, it still houses Penn offices, including the Netter Center for Community Partnerships, a national leader in university service education, today.

In 2003, the building was renovated under designs by the firm of Atkin Olshin Schade. The exterior was cleaned, the old metalwork repaired, and the ground floor was overhauled for retail purposes and enhanced accessibility. In early 2013, Penn alumnus Ron Perelman donated $25 million to the university. The gift will transform the West Philadelphia Title & Trust Building into the Ronald O. Perelman Center for Political Science and Economics. Re-construction will begin when one of the buildings current occupants, Penn’s Office of Government and Community Affairs, moves to its new home currently under construction at 3901 Walnut.

Join THE SHADOW (aka GrojLart) for his Forgotten Chestnut Street tour this Saturday, November 8th at 11AM. It’s his last tour of the season, so don’t miss out!