The Tombstone Wall Of Society Hill 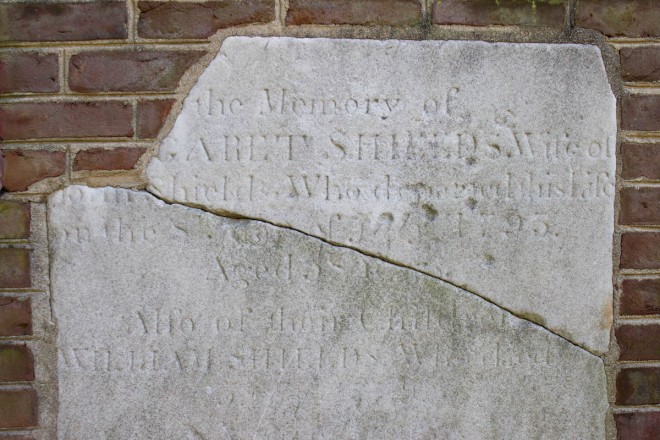 Editor’s note: With a hat tip to Halloween and the beautiful autumn transition of October in the city, we present this first story in a series about historic cemeteries. A variation of this article, “Walled History: The Story Behind the Tombstones at the Presbyterian Historical Society”, was previously published on the website of Presbyterian Church (USA).

Tucked away behind the Presbyterian Historical Society at Fifth and Lombard Streets lie peculiar traces of the eighteenth century. Suspended in brick and mortar on the north side of the Society’s back wall hang thirty cracked and weather-worn tombstones with no explanation of how they got there or why.

The tombstones are mysterious for their odd placement and perplexing for the deceased they name. Not anyone buried at Old Pine Cemetery–the adjacent quarter-acre plot of land that holds the remains of over 3,000 souls–or even dead members of the Old Pine Street Church are on the wall. The tombstones identify deceased members of the First Presbyterian Church in Philadelphia, the flagship church of early American Presbyterianism, whose graves were displaced almost two centuries ago. 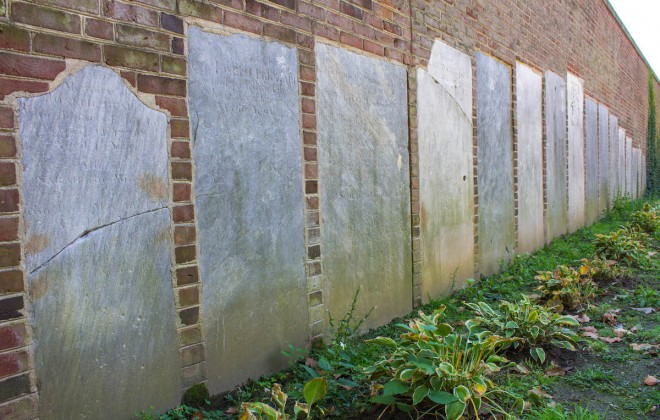 Founded in 1698, the First Presbyterian Church—widely known as “Old Buttonwood”—was located on Market and Bank Streets. Aside from documents housed at the society, the tombstones are the only known remains of First Church.

In 1820, after the original church on Market and Bank Street was declared unsafe, the congregation moved to Seventh Street and Washington Square. After merging with Calvary Presbyterian Church in 1928, it moved again to Fifteenth and Locust. The congregation moved a fourth, and final, time in 1949 to 21st and Walnut, occupying a Gothic-revival church designed by the noted architect Henry Augustus Sims. 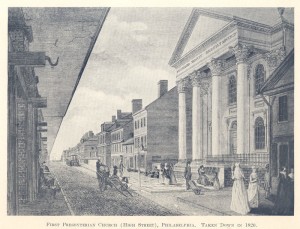 The First Presbyterian Church eventually sold the valuable real estate where their first church stood. The only problem was the more than 100 years of remains in the burial ground. Social customs of the day dictated that over 2,400 bodies buried at the Bank Street lot should be removed and reinterred elsewhere. The remains of 1,500 people were removed in 1847 and 1848 and reinterred to Philadelphia’s then-new Laurel Hill Cemetery. Today, beneath a monument to the reinterred, a staircase leads to a crypt containing the ashes and bones of those bodies.

In the first half of the nineteenth century this part of Society Hill was a far cry from the affluent locale it is today. During the winter months, many poorer inhabitants stole planks from the wooden fence surrounding the burial plot and burned them for heat. After 80 years of petty thievery, First and Third Presbyterian churches built a tall brick wall around the burial ground on Pine Street. To the south of the wall ran a small alley named Tenor Street. 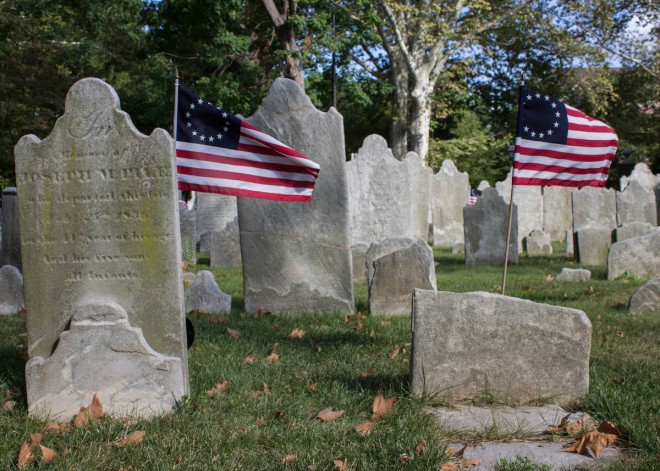 The churchyard at Old Pine is home to around 3,000 resting Philadelphians. | Photo: Michael Bixler

The First Presbyterian Church reinterred 900 of the bodies that were removed from Bank Street in the burial lot next to Third Presbyterian Church. Families that opted to have their ancestors reinterred at Laurel Hill Cemetery were not allowed to bring headstones, some of which dated from the eighteenth century, including one inscribed with 1745. “That bothered some of the descendants,” said Ronn Shaffer, director of the Old Pine Conservancy. “So they removed family headstones, brought them over to Pine Street, and leaned them against the south and west walls.” Eventually this plot of land, which was sold by the First Presbyterian Church to the Third Presbyterian Church the 1980s, became the resting spot for the forty-three tombstones from the Bank Street burial ground. 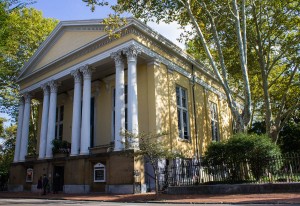 The City’s redevelopment authority began to take an interest in revitalizing the area in the early 1960s. In a highly public showdown between the city and local residents, the row houses that stretched along Tenor and Lombard Street were razed. The cleared land behind Third Presbyterian Church was later purchased by the Friends of Old Pine, an organization founded in 1951 to provide support for the preservation of the church and its graveyard.

The Presbyterian Historical Society started looking for a new home in the 1960s and purchased what had become an abandoned lot. As construction began, the old south wall of the church cemetery–built in the 1840s–was torn down, and Tenor Street (renamed Addison) became the rear of the Society’s new headquarters. To preserve the forty-three tombstones, now more than 200 years old, the architects decided to embed thirty of them in the northern wall of the new building. The remaining thirteen were propped against the western wall of the Old Pine cemetery, where they remain to this day.

Perhaps it seems fitting that the walls of a historical society should not only mimic a historic building style, but contain actual artifacts from that era. In the case of the Presbyterian Historical Society, tombstones in a wall face tombstones on a lawn, uniting the history of three Philadelphia congregations with one piece of hallowed city ground.

David Koch David Koch works as a reference archivist at the Presbyterian Historical Society. Before receiving his MILS at Drexel, he worked as a reporter in Central Jersey and New York. He is a huge history buff and a native New Jerseyian