The Hidden River On Grand Display 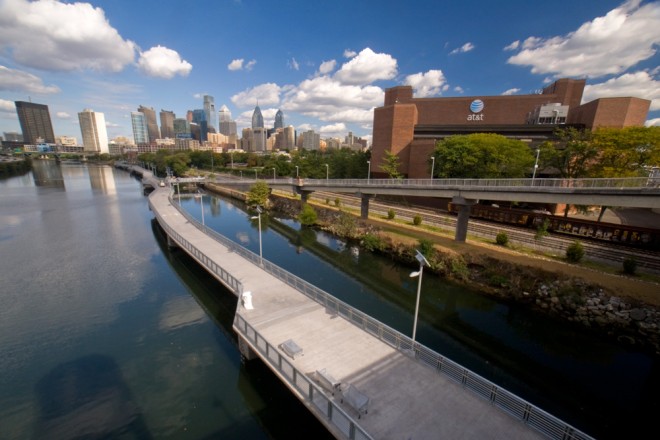 It seems the Schuylkill River has taken its River of the Year designation to heart. In a matter of five days, Philadelphia will help the 2014 champ celebrate with the launch of two major amenities that exist solely because of the river: the Schuylkill Banks Boardwalk, officially opening with a ribbon cutting this morning at 11:30, and the multipurpose performing arts and recreation center on Venice Island, opening with the same on Tuesday.

After a 125-mile journey from the headwaters that supply the nation’s oldest brewery with the water that becomes Yuengling Lager, the Schuylkill arrives at its final destination, the Delaware, where the confluence of those rivers gave William Penn a reason to put a city here and call it Philadelphia. Of course the Schuylkill, Dutch for “hidden river,” serves as a reminder that there were people here well before Penn arrived (but long after the Lenni-Lenape already called it home). 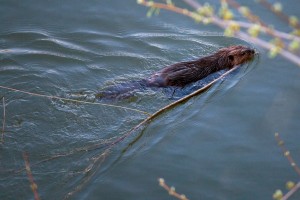 The seven miles of Schuylkill River between Manayunk and Center City are, in short, the reason Fairmount Park exists. The city’s foresight to purchase large tracts of land on both sides of the Schuylkill River and Wissahickon Creek three years after the Civil War to protect the watershed against pollution is still a remarkable achievement. Of course the city’s industrial might as the Workshop of the World and a wartime producer did its part to pollute it horribly anyway. But the river has rebounded, to a point that a river otter was caught on the Water Works’ fish cam, and I saw the beaver at left with my own eyes this spring. And it’s within this same vein—environmental responsibility—that the $46 million Venice Island project was born.

As part of a nationwide update, the US Environmental Protection Agency directed the Philadelphia Water Department in 2004 to modernize its flood control and sanitary runoff facilities along the Schuylkill River. Ten years later, the resulting four-million-gallon storage basin, built specifically for heavy rain events, also produced a complete makeover of Manayunk’s beloved, but dated, Venice Island rec center. Air filters and a sophisticated ventilation system will prevent the scent of sewage from permeating the new public space. (See Vivienne Tang’s 2013 story for Hidden City HERE.) Once completed, the project will also include the restored flow of the Manayunk Canal, and improvements to the spillway of the Flat Rock Dam at the north end of Venice Island.

With a design led by Andropogon Associates—whose offices are two blocks away—the landscaping between Cotton and Lock Streets make the experience wholly about the river. If the series of angled gabions (large cages filled with rocks) don’t make it clear that there’s a river that floods regularly, the signs warning you of a river that floods regularly will. These are posted on the gabions between the unfortunate abundance of parking spaces, the product of a number of meetings with neighbors. While the amount of asphalt is noticeable, it’s tempered by plantings of native grasses and trees, along with stormwater tree trenches—trees planted with a connected underground infiltration system. The attractive, symmetrically placed street lamps that recall long blades of grass help too. 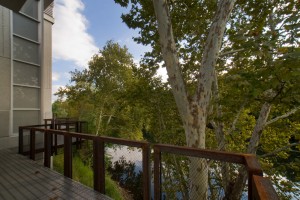 Along the banks of the river stand a number of older trees that have weathered many a storm, including the one on May 1st this year that flooded the Schuylkill and put the basin right to work. One of these, a london plane whose arching branches mimic the Manayunk Bridge in sight just upstream, frames your view of the river from up close on a catwalk on the rear side of the Venice Island Performing Arts Center. Zigzagging along the contours of the building, the catwalk involves a grated walkway and weathered steel railings to create what’s arguably the nicest facet to the project. As a bonus, it also draws your eyes from the nondescript design of the building.

When facing it from Cotton or Rector Streets, the Performing Arts Center presents itself with blank, giant off-white walls. And while the angled “Venice Island” sign is quite handsome, it’s mounted directly above a loading dock. The entrance of the building does a little better, with horizontal bands of glass that work in step with the grassy terraces that step down to the baseline of the basketball court. These spectator benches continue courtside with simple but graceful concrete stairs interspersed with plantings. At the far end of the court, the headhouse of PWD’s storage basin features a curving green roof that soften the building’s no-nonsense purpose.

A rain garden and sprayground on the north side of the Performing Arts Center will provide children and parents with riverside summer relief; they’ll also provide an osmotic education on stormwater, with curving drains and “slides” that clearly illustrate how the water makes its way to the river. At the southern end, the landscaping, which features relief sculptures of local flora and fauna and partly polished, partly sculpted rock benches, tapers off with the island. Here, a small trail leads down to the tip of the island—where the Canal reenters the Schuylkill—and the Norfolk Southern (“Blackie”) Bridge marches overhead. A kayak/boat launch is under consideration for this location. Should that day come, the seafarer can put in there, head for Boathouse Row, and assuming a safe portage around the Fairmount Dam, make for the Schuylkill Banks Boardwalk. 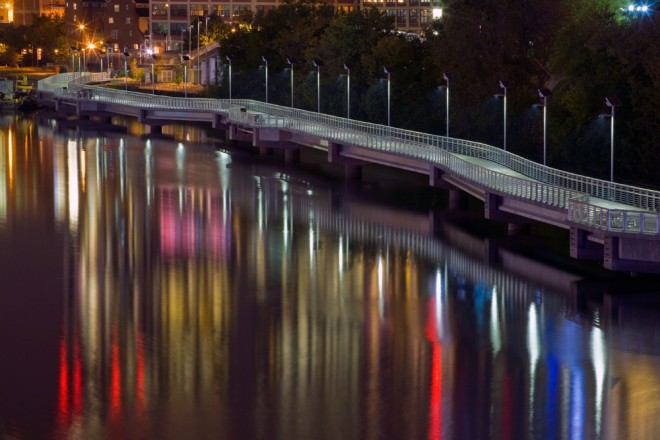 Onto the Schuylkill and into the future | Photo: Bradley Maule

The $17 million Boardwalk represents the Schuylkill River Development Corporation’s next phase of the Schuylkill Banks Trail, ten years after it opened from the Art Museum to Locust Street. In that same time, the popular recreational trail has seen a footbridge over the busy railroad tracks, Paine’s Park skateboarding space, and the Grays Ferry Crescent with a skatepark of its own. Bartram’s Mile, the next phase to connect the Crescent with Bartram’s Garden, should begin construction next year, and the complicated navigation of the remaining gap, between the 34th Street and South Street Bridges—which will likely require another boardwalk—is in the early planning stage. 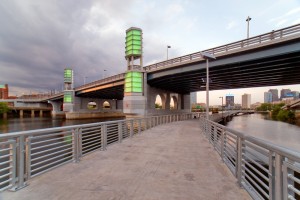 If you’re not a fan of the changing lights of the South Street Bridge’s towers, perhaps you can try them again from up close | Photo: Bradley Maule

But at risk of getting too far ahead of ourselves, let’s give the Boardwalk its moment. Meandering 2,000 feet from Locust Street to the South Street Bridge, its simplicity is its greatest asset. As Inga Saffron pointed out in her review on Monday, the Boardwalk was engineered without an architect. This close to the river, it didn’t really need one; hovering just a few feet above a tidal river, you’ll pay less attention to the structure you’re on and more to the views that, aside from a kayak or canoe, have never existed before: of watery sunset views, of the ever changing skyline (including the Cira Centre complex which will especially demand your attention once the FMC Tower is built), of the blinding lights of Penn Park, of CHOP’s mini-city about to hop the river, of the rumbling oil trains that several times a day deliver tons and tons of crude oil to the renewed refineries on the same river just downstream.

With only three access points—at Locust Street, at a ramp up to the north side of South Street Bridge, and a stairway to the bridge’s south side—some have expressed concerns of safety. But considering the popularity of the Banks, even after dark, there will surely be safety in numbers. Plus, at 15′ wide and made of sturdy concrete, the boardwalk and ramp can accommodate emergency vehicles.

In Portland, Oregon, a similar mile-long boardwalk floats on the Willamette River between the Morrison and Steel Bridges hemmed in by I-5 and railroad tracks, with only one access point between them. Yet it’s always packed, with joggers, walkers, and especially cyclists, as the Eastbank Esplanade’s boardwalk is an integral part of Portland’s network of bike routes. The Schuylkill Banks Boardwalk will do the same for The Circuit, Philadelphia’s growing regional network of trails, especially when the trail continues on down the river to Bartram’s Garden and, ultimately, Fort Mifflin.

Opening today, the Schuylkill Banks Boardwalk represents Philadelphia’s desire for open space, it brings another amenity to its thriving core, and by its nature, it gives much needed attention to the cyclist and pedestrian. And like the Venice Island project opening next week just a few skips of a stone upstream, it breathes fresh life—and an invigorated identity—into the Schuylkill River.

To launch a gallery of the Schuylkill Banks Boardwalk, click any of the images below.

To launch a gallery of the Venice Island Performing Arts and Recreation Center, click any of the images below.