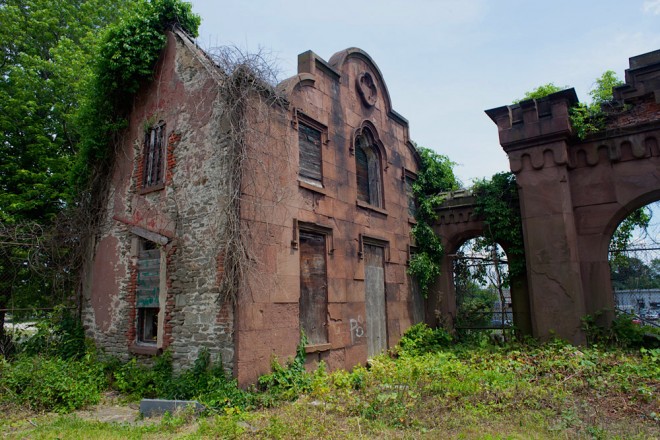 Since 2003, the Preservation Alliance for Greater Philadelphia has published an end-of-the-year “Endangered Properties” list, highlighting the city’s historic buildings most threatened by development, demolition, or decay. In reevaluating their annual December announcement, the Alliance has decided to take a more timely, strategic approach with the launch of their “Places To Save” list. Announcements will now be made three times a year on the Alliance’s website and in their tri-annual magazine, Extant, which editors here at the Hidden City Daily have helped to create.

The Alliance hopes that spotlighting four new threatened historic assets on an ongoing basis will help underline the need for direct action and illuminate the steps that can be taken to make preservation a reality. “Places don’t wait until December to be endangered,” says Ben Leech, the Alliance’s advocacy director. “The list was always just a snapshot in time, and buildings threatened in January or February were often lost before the next list came around. By spreading the list out throughout the year, we can be more responsive and strategic with what we feature.”

Leech says “Places to Save” will replace the lengthy, somewhat morbid “Endangered Places” list with an “intentional approach that focuses on places where there is a clear preservation strategy—threatened places that we can do something about.” He says with a shorter list it will be easier to give more attention to each place.

Leech notes that although some buildings on the list may appear to stand out more than others, all of them are in equal need of immediate attention. He goes further to bullet point a few reasons why. “The Mount Moriah Gatehouse is losing its fight against gravity and the elements, so in that way is probably the most dire of the four. Stabilization needs to happen soon or there won’t be anything left to stabilize. Planning is also moving ahead quickly on Love Park, and we’re afraid that the path of least resistance will be a new building in place of the Visitor Center. We’re picking up signals that some of the pushing for redevelopment just “don’t get” the building, so we need to quickly demonstrate that there’s strong public support for keeping it. The Blue Horizon is timely because it will be considered for Philadelphia Register designation in November and December, but local designation would be just the first step in trying to find a new owner and use for the building that doesn’t involve demolition.”