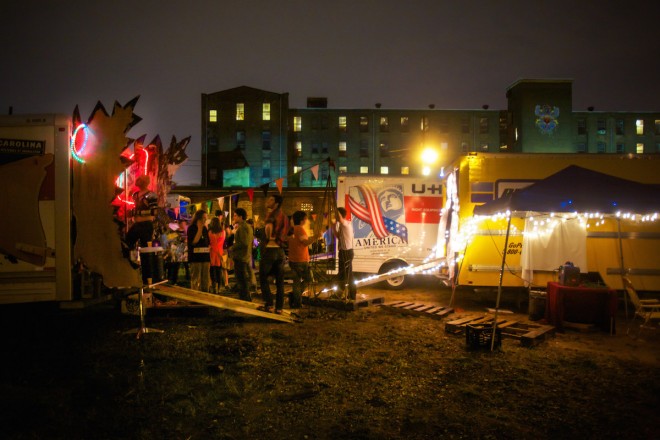 In 2010, members of the artist collective Little Berlin began converting a vacant lot across Boston Street (officially 2011-21 E. York Street) from their gallery in the Viking Mill building into a community garden and ad hoc performance space. Since then, the group has held block parties, installed sculpture, taught farming to children, and grown vegetables on the lot, which until the 1970s was the site of the Union Tabernacle Presbyterian Church.

Now, the property’s owner, David Hirsh, who also owns the Viking Mill, has signed an “agreement of sale” with a prospective buyer, his realtor, Solo Real Estate, has confirmed. The buyer is BMK Homes, a developer of contemporary row houses in Fishtown and Kensington. Construction on the houses, which are to include off-street parking, is to begin in March, 2015.

The Fairgrounds sits in a zone east of the El, near Front and Jasper Streets, that has seen dramatic changes in the last 10 years as fires have claimed numerous mills, others have been restored, and gentrification pressure pushes in from Fishtown. 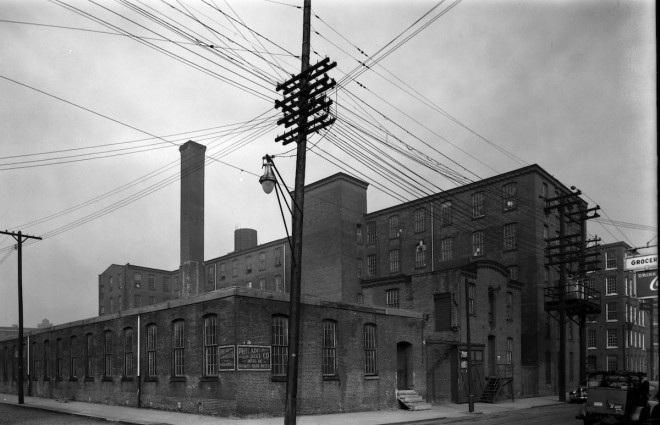 Viking Mill and The Philadelphia Wood and Heel Company in 1937| Photo: vikingmill.com

Before then, East Kensington had been caught in a long spiral of deindustrialization. The Viking Mill’s website says the 1880s factory was “constructed in a community where employees walked to and from work, where living and work spaces were closely knit.” It was just that relationship that accelerated the neighborhood’s decline in the 1960s and 1970s in a cycle of neglect, high vacancy rates, and unemployment.

She wryly recalls a time when she couldn’t give away empty lots in this neighborhood. That was in the 1990s, when NKCDC started its vacant land program. “For a long time we had lots of terrible trash-strewn open lots,” she explained. “We cleaned them up and the community got used to the green open spaces.” 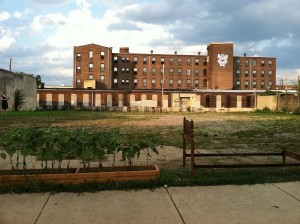 The Fairgrounds lot was just one of hundreds in the NKCDC district. The church had closed after decades of declining membership and merged with a neighboring congregation.

When the arts collective Little Berlin arrived in the neighborhood in 2010 they started hosting events on the site informally at first, before seeking permission from Hirsh, who had purchased the lot in 2008, to develop it as a performance venue and community space. The Little Berlin website describes the agreement with Hirsh as a “partnership.”

The artists took the idea seriously and have been relentless in bringing life to the parcel. A few weeks ago, a Dodge Caravan that had been driven from Ohio was set up with two film projectors replacing the headlights, shining a film on an adjoining wall.

Peter Erickson, a member of the art collective, says his favorite event was “a semi-secret email invitation-only event where there were a bunch of different art cars or U-Hauls with art exhibits inside them.” He says kids from the neighborhood also turned up and enjoyed the spectacle.

The neighborhood’s vintage housing and soaring former factories have lately become an asset, attractive to developers and young, prospective tenants. The artists are in part responsible. 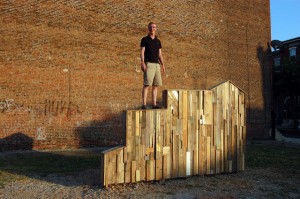 “There are a lot of houses being built and houses being refurbished too that have been empty for a long time,” says Erickson. While he has only belonged to Little Berlin for two years, the change to the gentrifying neighborhood in just that time became obvious.

“It’s hard to wrap my head around it,” he says, “that in one way we’re making it nicer for people already living there and in other way making it easier for real estate developers to come in and buy property.”

David Hirsh’s family business, Patriot Fiber, has been located in the Viking Mill since the 1950s. After the fire at the nearby, vacant Buck Hosiery factory killed two firefighters in the spring of 2012, the mill became a target of a crackdown by Philadelphia’s Licenses and Inspections Department last October. The building was partially closed for several months, forcing Hirsh to resolve numerous code violations. Little Berlin’s curators said Hirsh brought up lost rents as one of the reasons he needs to sell the Fairgrounds lot to raise funds. 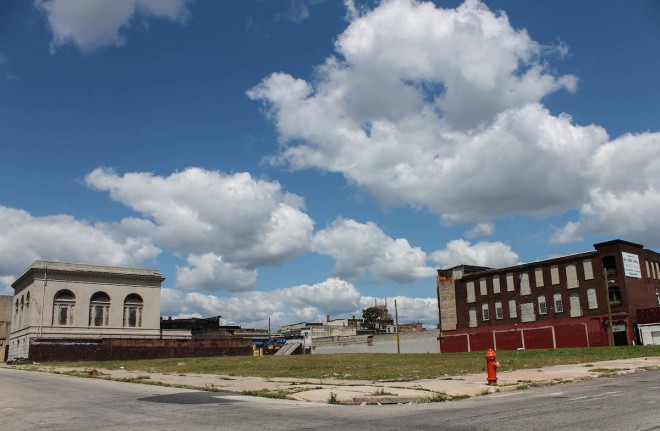 The empty lot at Jasper and York where Buck Hosiery once stood | Photo: Michael Bixler

Sandy Salzman acknowledges that the reclamation of vacant lots as community spaces has certainly contributed to making the neighborhood more attractive to developers. While it’s sad to lose the public venue, “in a way it’s good,” she observes.

There are also still more empty lots left. Erickson, with Little Berlin, says it would be difficult to abandon the Fairgrounds after putting hundreds of hours into its beautification but the neighborhood presents other possibilities. Those include an immediately adjacent lot, he says, “one of those ambiguous properties no one knows who the owner is.”

Little Berlin is hosting a public meeting and discussion about the future of the space and gentrification generally on Saturday, October 25, from 5PM to 9PM, at the Fairgrounds, 2013 E. York Street. 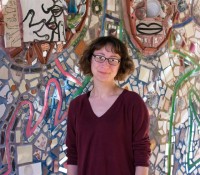