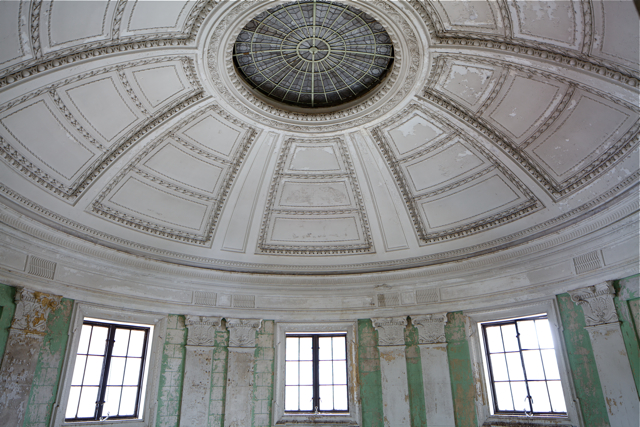 Looking up in the rotunda at Germantown Town Hall | Photo: Peter Woodall

Born out of last year’s Hidden City Festival project Think Tank, which turned the building into a hub of community action, the Germantown Town Hall Collaborative has continued to court ideas for the building’s future. In addition, architect Charlie Mcgloughlin has sustained the community conversation around the building and he intends to keep it going. 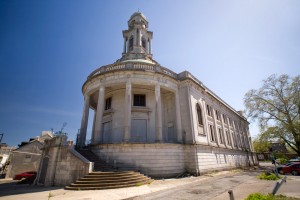 On Saturday, October 11, Mcgloughlin and the Collaborative will host a community meeting to create a list of Guiding Principles for the reuse of Town Hall. The meeting is designed to come up with a core of community expectations for the future of Town Hall and provide immediate neighborhood-level discourse with potential developers. “We would want the new owner to be sensitive to the community and its varied and complex interests,” says Mcgloughlin. “While we would love to see the community come together to find a specific use that would be self-sustaining for the hall, we understand that a private developer or private institution might be the more likely next owner.” Ideally, he says, the new owner would come to agree to a set of guiding principles developed by neighbors. The process of creating the guiding principles will begin at Saturday’s meeting.

With its cavernous rotunda, sweeping hallways, the 28,000 square foot building is well designed for a museum or educational use (the long hallways are lined with generously sized classrooms). A community center may fit the space too, continuing the building’s heritage as a public place. However, the $6 to $10 million in basic, necessary upgrades could be a roadblock. Despite the prohibitive cost, reviving the 91 year old building, vacant since 1998, for public use is the Collective’s first choice. “There would need to be a focused vision of the program of such a community center, and then identification of the funds required to open it to the public,” says Mcgloughlin. He adds, “As this building was long used as a public service building, ideally future development should preserve public access in some form or fashion. Specifically, at the very least, public access to the grand War Memorial within the rotunda should be maintained so that the community can feel proud of the gorgeous space and show it to visitors. It has the potential to be a destination in the Northwest.” 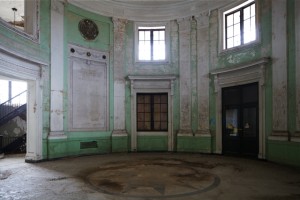 The Collective is eager to remain in the conversation if and when development plans for Town Hall begin to materialize. Mcgloughlin hopes the guiding principles will provide a framework “for continued community access and engagement, preservation of the war memorial, and maintaining the historic integrity and unique beauty of the building as a Germantown landmark.” He also wants to integrate provisions for art and performance. “When Hidden City opened up the building in 2013 the first and quickest use of the space was made by community artisans and performers. The grand rotunda alone has incredible acoustics, which made for stellar musical performances for much of the festival.” 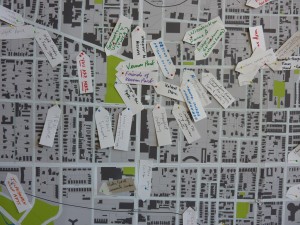 Warner says that the project brought the Germantown Town Hall Collaborative into being last summer. “The doors to the Hall were opened by Hidden City, we in turn opened the space for community conversation, and the community had space to start this effort,” says Warner. “We offered this workshop to the Germantown Town Hall Collaborative after Charlie made a call for help to bring the community together to talk about Town Hall. We see it as an opportunity to provide facilitation for an all volunteer group and to give an opportunity for our students to practice their design and facilitation skills.”

The workshops they intend to run on Saturday will involve storytelling, context mapping, value mapping and an exercise that allows attendees to “assume the developer role to evaluate the values–cultivating empathy and strengthening the presentation of the values to the broader community and developers,” says Warner.

The Germantown Town Hall Collaborative “Guiding Principles” meeting is this Saturday from 10am to 12pm at the Germantown Mennonite Church at 21 W. Washington Lane in Germantown.