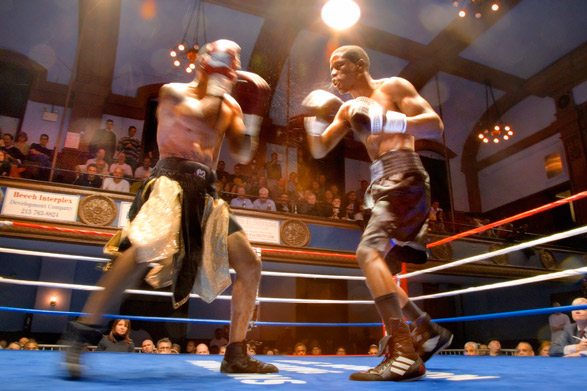 Last Fight at the Blue

Michael staged the last boxing matches at the Blue Horizon on her 65th birthday, June 4, 2010. Once again, a citation from the Department of Licenses and Inspections called into question the arena’s future. Acting on a tip from a City Health Department employee, L&I cited Michael for selling those sausages and beer without the proper permits. The citation caught the attention of the Philadelphia Department of Revenue which found that Michael and her partners owed $60,000 in property taxes going back to 2008.

Things at the Blue were quiet for a little more than a year–until in July 2011, when Governor Tom Corbett approved a $6 million Redevelopment Assistance Capital Program (RACP) grant set in motion in 2010 by then-Governor Ed Rendell for Mosaic Development Partners to redevelop the Blue Horizon. A local real estate broker, and high school friend of Rendell’s son Jesse, brought the project to Rendell’s attention, according to the Daily News. 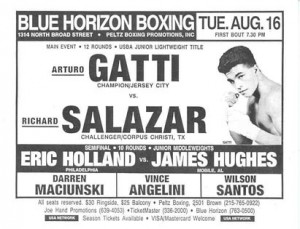 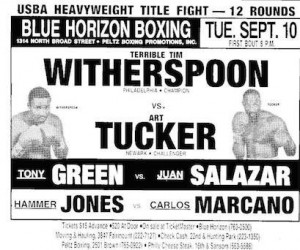 The grant required that Mosaic secure matching private funds for the project. These funds would be provided by a promised loan from The Reinvestment Fund through the organizations’s New Market Tax Credit program, which allowed investors to claim 39 percent of their total investment against their federal tax returns for projects in low-income neighborhoods.

However, four years later with no sign of redevelopment, those matching funds are no longer available. “It’s not a project in our pipeline right now,” Kavita Vijayan, a spokesperson at The Reinvestment Fund told Hidden City. “We may have offered some support earlier, but currently it’s not in our pipeline.”

The grant also set in motion a review by the state historical commission that would reveal problems with Mosaic’s plans as they changed in the following years.

The contract for the grant will terminate on January 31, 2016, five years after it was issued, and now a mere sixteen months away.

At the time of the grant, the developer had no real track record to speak of, other than a few proposals for projects involving public subsidy. Not much has changed in the intervening years. Mosaic’s brief resume is filled with uncompleted developments and one of its principals has a history of legal trouble dating back to a disbarment more than ten years ago. 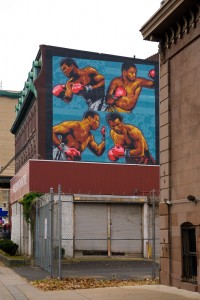 Leslie Smallwood-Lewis and Gregory Reaves launched Mosaic Development Partners in 2008. The following year, they reached an agreement with the Coatesville Redevelopment Authority to build a $2 million shopping mall on 26 acres of industrial brownfields called “The Flats.” The agreement went before city council in Coatesville and fell through. Mosaic wanted the city to pay for cleanup at the site. The Flats remains undeveloped.

Before Mosaic’s plans went to Coatesville’s city council for approval, Karl Marking, a Democrat running for a council seat, criticized the city for failing to look into the history of Mosaic’s principals. Marking found that in 2002 and 2003, Smallwood-Lewis was disbarred in Pennsylvania and New Jersey for “knowingly misappropriating clients’ trust funds in the amount of at least $139,500,” according to the Supreme Court of New Jersey.

“I have a good explanation, but obviously this is a matter that was dealt with a number of years ago,” Smallwood-Lewis told the West Chester Daily Local News in 2009. She declined to comment further. But beyond these cases, Smallwood-Lewis has been named as a defendant in multiple lawsuits in Philadelphia municipal court.

Marking also said Mosaic used projects completed by Smallwood-Lewis and Reaves’ former employer, the Goldenberg Group, to bolster their resume. As of The Flats proposal, Mosaic had yet to complete their first project.

Of the four projects currently listed on the firm’s website, Mosaic has only completed the Diamond Green Apartments, a 92-unit building with 12,000 square feet of retail space at 10th and Diamond Streets. Mosaic received $750,000 for the project from the City’s Office of Housing and Community Development’s affordable-housing support program and funded the rest with private equity and construction loans, according to the Inquirer. 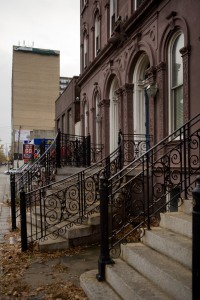 In 2013, Mosaic demolished Edison High School at Lehigh Avenue and North 7th Street to make way for a planned shopping mall. For this project, Mosaic received funds from the Reinvestment Fund, the Philadelphia Industrial Development Corporation, the Pennsylvania Department of Community and Economic Development and the federal Department of Housing and Urban Development. Construction on part of the strip mall, which Mosaic calls Edison Square, appears to be near completion, but there is no sign of commercial tenants moving in.

The fourth project in Mosaic’s online resume is Eastern Village, a planned mixed-use development at the former Eastern Factory at 30th Street and Cecil B. Moore Avenue. This project fell through back in 2006 and the building was sold in January 2013 to Railway 3002 LP and Barbara Magill. Back taxes on the building, which is in serious disrepair, amount to over $9,000.

Mosaic does not list on its website a 2012 proposal to tear down the Ritz Five on Walnut Street and build a bigger theater and a 14-story apartment building on the site.

Six years after the company incorporated, Mosaic has finished the Diamond Green Apartments, demolished Edison High and scared preservationists with their plans for at least two other significant properties.

Mosaic has been sued several times in contract disputes.

The RACP program entry on the Blue Horizon says groundbreaking is planned for fall 2013.

From Restoration to Demolition

As the years went by after the state grant was issued, Mosaic’s plans changed at least three times, from gutting the auditorium and filling it with hotel rooms to a responsible rehabilitation of the boxing hall and finally to a complete demolition of the rear structure, leaving only the facades of the brownstones in the name of “preservation.” And now preservationists, both at the city and state level, are worried that the development will proceed against the objections of the Pennsylvania Historical Commission. 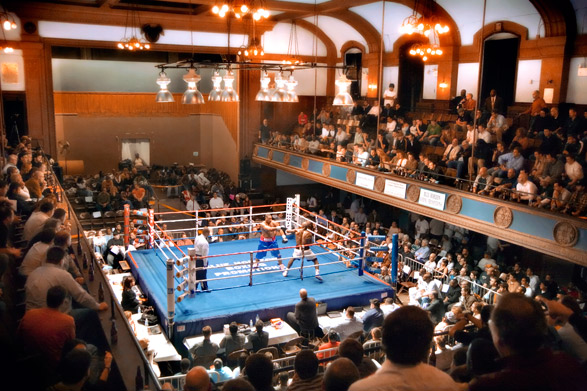 In 2011, Reaves and Smallwood-Lewis, as well as Vernoca Michael and her partners, declined to reveal the terms of Mosaic’s purchase of the Blue Horizon, though Reaves did tell reporters that the settlement included payment of the $60,000 of property taxes Michael owed. At this time, the Daily News reported that the sale went through, but more than three years later, 1314-16 North Broad Street remains in Michael and her partners’ names.

When it was first announced, Reaves said the redevelopment project would cost $18 million. Mosaic, along with others representing the redevelopment project, presented their plans to the City Planning Commission in February 2012. In her presentation, Smallwood-Lewis bumped up the projected cost to $28 million. The hotel would include 12 suites housed in the current brownstone mansions. The remaining 75 rooms would occupy a new building just south of the Blue Horizon where the current 1310 North Broad Street stands. The plan included no on-site parking, but PlanPhilly reported that Mosaic was in negotiations with owners of nearby properties as well as Temple University for parking arrangements. Reports from that time did not name a hotel operator, though Mosaic planned to call it The Hotel Blue on Broad and enroll it in the Ascend Hotel Collection, which is a membership program for boutique hotels with Choice Hotels International. The hotel, according to the developers, would cater to visitors at Temple and take advantage of overflow from the Convention Center. The plans required zoning variances to allow for higher density use.