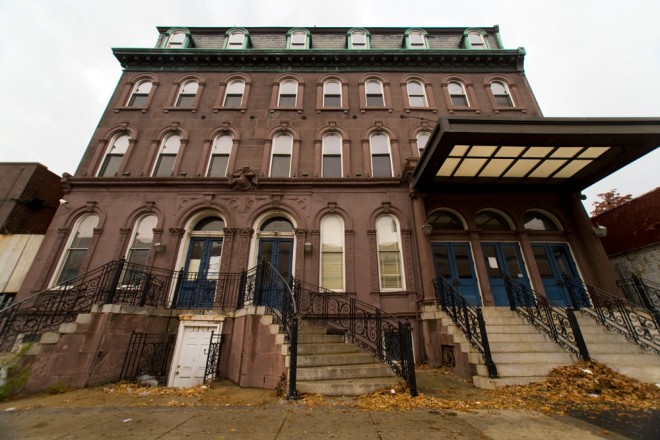 Nearly four years ago, the state budget secretary in then-Governor Ed Rendell’s administration signed a letter authorizing the release of $6 million in state funds for the redevelopment of the Blue Horizon, a former boxing arena on North Broad Street. The grant came with a catch: the developer needed to match the state money with private investment.

Now, Mosaic Development Partners, a developer with a mixed record of pursuing publicly funded projects on properties of historical significance, wants to demolish the boxing arena and replace it with rooms and on-site parking for a boutique hotel, in a location well outside of the city’s tourism district. The Blue Horizon isn’t on the Philadelphia Register of Historic Places, and thus the Philadelphia Historical Commission can’t protect it from demolition.

In the intervening years since the state capital grant, Mosaic, along with their partner, Orens Brothers, have changed their plans at least three times. With the grant money’s expiration fast approaching, the developers say it will be impossible to preserve the boxing auditorium. No one at all can predict the fate of the little club that boxing fans talk about in the same breath as Madison Square Garden and Caesars Palace.

The Chapel of Boxing 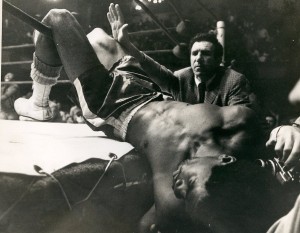 Sonny Floyd, of Trenton, knocked out of the ring by middleweight slugger Eugene “Cyclone Hart, of Philadelphia, on May 19, 1970, the 15th and last show of the 1969-70 season at the Blue Horizon. Hart turned pro on the first show and fought on 10 of the 15, winning all by knockout. Helping Floyd is alternate referee Hank Cisco. | Photo courtesy of Peltz Boxing Promotions, Inc.

Philadelphia has undoubtedly played a major role in the history of boxing. But many of the landmarks of this history have disappeared over the years: the old Alhambra on 12th and Morris Streets demolished in the 1960s and replaced with a parking lot; Convention Hall at 34th and Spruce torn down in 2005 to make way for the expansion of the University of Pennsylvania Medical Center. Even Joe Frazier’s Gym, though it was added to the National Register of Historic Places in 2013, now houses a furniture store. The old gym’s sign fades in the sun over top the bright red box letters of “Home Gallery” and a pair of boxing gloves drawn in window paint. “Knock Out Prices,” the sign reads. The gym stands like a palimpsest representing the city’s fading boxing culture.

But for decades, the Blue Horizon punched above its weight class. In the boxing world, its name is revered alongside those of venues that seat 10 times the people. In a 2003 London Daily Mirror story about a boxing arena slated for demolition in that city’s East End, reporter Barry McGuigan wrote, “As a venue the York Hall has a reputation that extends way beyond British shores. In its own way it merits mention with Madison Square Garden in New York and the Blue Horizon in Philadelphia, fabled arenas that have become part of the boxing fabric as a result of the epic duels staged.” 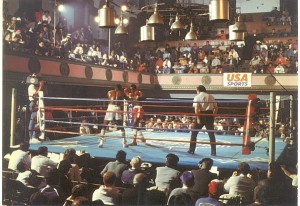 Hugh Kearney (white trunks), of Philly, en route to beating Darryl Anthony, of St. Louis, on May 5, 1987 at the Blue Horizon. Referee is Frank Cappuccino. | Photo: Will Hart

In 2001, readers of The Ring magazine voted the Blue Horizon the best boxing venue in the world, above MSG, the MGM Grand and Caesars Palace in Las Vegas. But the building and the boxing arena have faced challenges stretching back decades.

The three regal 1865 brownstone mansions at 1314-16 North Broad Street have had, by many accounts, two periods of glory: one in the city’s civic history in the early-20th century, another in the history of the sport of boxing, starting in the 1960s. By 1918, six years after the Loyal Order of Moose bought the properties and joined the restrained Second Empire row houses into one unit, adding a large meeting hall in the rear for their lodge, the buildings hosted the largest membership of any fraternal organization in the world. The order valued their lodge at $300,000 and counted more than 21,000 men as members in Philadelphia, according to an early history of the Moose.

In 1961, Jimmy Toppi, Sr. bought the property for $85,000 and converted the meeting hall into a boxing arena. The drop in value from 1918 is symptomatic of the change in North Broad’s fortunes in the middle of the century. Toppi called his new boxing venue the Blue Horizon after the old Leo Robin song “Beyond the Blue Horizon.” The Blue was small, even by the day’s standards, seating around 1,300. 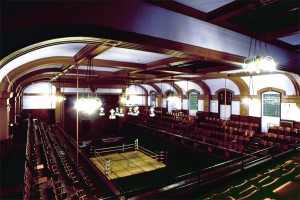 The boxing hall today looks much the same as the Moose’s meeting hall must have looked when it was built nearly a century ago. A three-sided balcony section, raised to the eye-level of boxers in the ring, holds four rows of tiered wooden chairs, worn by age and use. Wire racks loop under the seats, a good spot for stowing a large-brimmed fedora. Gilded wooden medallions ring the trim of the balcony and exposed beams curve gently into the ceiling and frame white plaster. In recent photos, the hall looks shabby, but not nearly beyond saving.

After legalized gambling came to Atlantic City in 1976, boxing, to a great extent, fled Philadelphia’s bigger venues for smaller clubs around the city. And though the small boxing cards never drew much money for promoters or the owners, the Blue Horizon gradually earned a reputation as one of the best places to see a fight. J. Russell Peltz, who put together major cards at the Spectrum and Bally’s in Atlantic City, promoted more shows at the Blue than anyone else in its fifty-plus year history as a venue.

Rich Hoffman, of the Daily News, joked about the condition of the arena at the Blue in 1985. “The paint is three colors,” Hoffman wrote, “pink, blue, and peeling.”

Then in 1987, the USA Network began televising fights at the Blue Horizon on its popular Tuesday Night Fights show. Eleven years later, ESPN picked up the television contract at the venue for Friday Night Fights. But the relationship would last only two years before safety concerns at the building put the site’s future in jeopardy.

Still, Peltz told Hidden City, all these years later the Blue Horizon could return as the premier venue for boxing in the city. “It’s not even a question. If they fixed up the building and gave us a contract, we could do sell-out shows there. I have no doubt,” Peltz said.

Troubles for the Owner

The current owner of the Blue Horizon has faced a number of challenges, both in sustaining it as a boxing venue and keeping the building up to code and paying property taxes over the past two decades. Public money has been funneled into the site a number of times, starting long before Mosaic entered the picture. 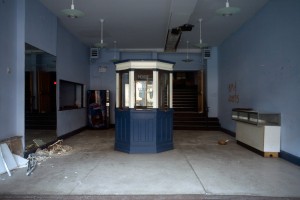 In 1994, when Vernoca Michael, the current owner, and her partners Carol Ray and Carol M.A. Whitaker bought the Blue Horizon, the building had fallen into further disrepair. “It was a real hellhole,” Joey “Eye” Intrieri, a Philly boxing legend, told the Washington Post. “It was rat-infested, roach-infested and falling apart. The locker rooms were horrendous.” More than a decade later, Michael told the Daily News that she and her partners purchased the building with the understanding that state and city money would be forthcoming for restoration projects on North Broad.

In 1998, after working with other promoters for four years, Michael became the only female African American in the nation registered as a boxing promoter. She started booking her own cards. The same year and then again in 2000, the City’s Department of Licenses and Inspections cited the Blue Horizon for safety violations, including for the condition of the arena’s catwalks, which ESPN officials said made them decide to take Friday Night Fights to a different venue. L&I did not force Michael to shutter the building, but the withdrawal of ESPN temporarily halted boxing there.

Around this time, the state promised Michael $1 million to address the safety concerns and rehabilitate the building if she could find matching funds from private investors. By July 2000, Michael and Ray had raised about $150,000 in donations.

With the money from the state, which came through in 2002 along with a $1 million low interest loan from the Delaware River Port Authority, Michael replaced boarded-up windows, repaired the Blue’s entrance on North Broad and renovated the ballroom next to the arena to bring in extra money by hosting weddings and concerts.

Michael Conallen, an executive at DRPA, told Hidden City that Michael almost immediately defaulted on the low-interest loan. But DRPA stands behind two other creditors. First in line to be paid by the developer or owner of the Blue Horizon is the City of Philadelphia for any outstanding property taxes, then the Minority Business Development Agency of Pennsylvania for a loan made around the same time and finally the $1 million to DRPA.

Part of DRPA’s agreement with Michael, Conallen said, stipulates that after defaulting on the loan, she cannot profit from the sale of the property. So, no money paid by Mosaic for the Blue Horizon would go to Michael.

By May 2002, boxing returned to the Blue Horizon and Michael announced plans to create a boxing museum in the building. 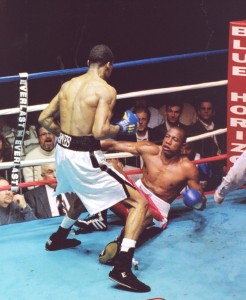 Five years later, Michael and her partners put the Blue up for sale after failing to pay more than $82,000 in property taxes. The initial price tag: $6.5 million. She dropped the price to $5.6 million, but never got an offer she “deemed credible.” Publicly, Michael said she hoped boxing could continue at the Blue Horizon. “I do know it would be an absolute shame if somebody came in and ended something with which the building has been so closely identified with for more than 40 years,” she said at a boxing award dinner in January 2008. Someone paid these taxes, but it would not be Michael’s last run-in with the Philadelphia Department of Revenue.

In 2009, Michael told the Washington Post that the money the City promised her never materialized because of confusion over tax exemption. She still promoted fights–about one every two months–at the Blue and earned extra cash from concessions, hot sausages and bottles of beer. J. Russell Peltz and famed trainer Joe Hand, Sr. even temporarily set up shop in the Blue Horizon in early-2009. As late as December of that year, Michael threw a “Night of Legends” meet-and-greet with former boxing champions to raise money to start her boxing museum.

Those concessions, though, would send the fate of the Blue Horizon down a rabbit hole it has yet to emerge from nearly four years later.