The Legend Of Midtown Village 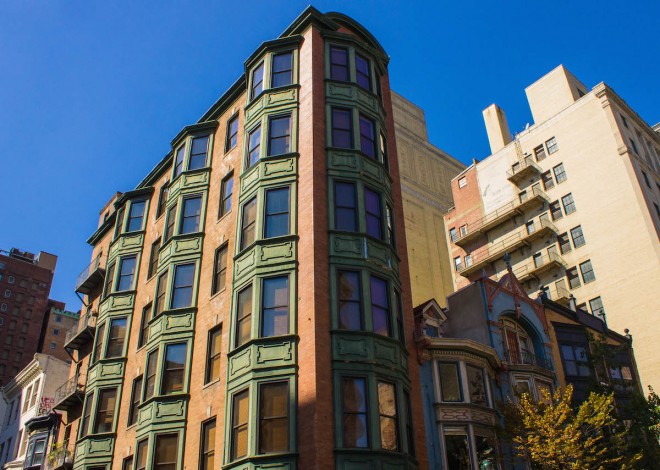 Thirteenth Street in Midtown Village is filled with architectural treasures. This stretch has made a wonderful transition in the last decade. Now vibrant with unique shops and restaurants, it owes much of its character to the abundance of gorgeous historic buildings. Of all of them, the 1307 Sansom Building stands out above the rest.

This slender building holds the distinction of being one of the only Philadelphia buildings remaining from the Felix Isman development empire. Isman was a real estate genius who literally wrote the book on the subject. He recognized urban growth patterns like Mozart wrote symphonies. Isman was able to identify areas of the city that would be in demand in the near future. He would buy up properties, demolish them, build small structures that alleged to be the “first phase” of a larger building, then sell off said property about 10 years later when the value of the location skyrocketed. Isman applied his incisive strategy in New York City and Chicago as well. “Daring Dealer Finds Philadelphia too Small a Field and Invades the Metropolis,” says a New York Times headline from 1907, calling Isman a “Man of Wise Saws and Big Ideas.” 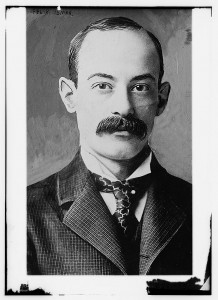 Isman’s  strategy in Philadelphia is still highly visible today. He was the one who bought the old U.S. Mint at Chestnut and Juniper Streets, built the short Mint Arcade, then sold the property to the developers of the Widener Building. He was also the one who bought the Dundas-Lippincott Mansion at Broad and Walnut, built the first Forrest Theater/retail building on its large lot, then sold the space to make way for the Fidelity-Philadelphia Bank 20 years later.

He also speculated on smaller buildings in shopping districts and that’s where this six story building at the northwest corner of 13th and Sansom enters the picture. Isman bought the parcel in November 1904. It was occupied by a small converted row house-to-retail structure called the Nolan Building. By March 1905, the John R. Wiggins Company was ready to build the design by Isman’s go-to architect, Amos W. Barnes.

The appealing design of the building takes advantage of the small lot and the corner. The building is tall and slim–6,000 total square feet stuffed onto a 16′ x 80′ lot. The four sets of bay windows on each floor give the building a distinctive look. The matching cornice forms into an arch on the 13th Street facade. Isman made sure to fill the entire ground floor with storefronts. Although it only has one today, it started out as three separate spaces.

At the time of construction, this part of 13th Street was a major clothing and apparel center. Naturally, the building’s first tenants were the Minister’s Tailor, a major suit store, and Carl A. Peterson Fine Imported Suitings. A myriad of office and retail tenants would come and go through the building over the next century–hosiery mills, hearing-aid makers, and chemistry labs. However, some are especially notable. 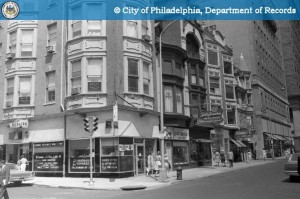 The White Star Shoe Repairing Company lasted four decades in the main corner storefront, from the 1930s to the 1970s, while it was known as the 1307 Sansom Building. It would later be replaced by another shoe repair store that remained into the 1990s.

In 1963, the building made steamy headlines. A French-born Philadelphian was caught running a house of prostitution here, setting off a controversy over whether or not her crime was justification for deportation. The case ended up going to the United States Department of Justice Executive Office of Immigration Review and became an oft-cited case known as the Matter of Dulhancey 11 I&N Dec. 375 (BIA 1965). (The madame was deported.)

In the early 1970s, the Tea Party opened its headquarters here. Quite opposite from today’s fringe right group, this Tea Party, known as Tax Equity for America (T.E.A.), aimed to redistribute wealth through tax reform. The goal was “equality of property and power.” The group disappeared after the Bicentennial.

Right around the time the old Tea Party was calling it quits, the building came under the ownership of the infamous Samuel Rappaport. At the time, the spaces upstairs were being used as modeling, ballet, and karate studios. In the 1980s and 90s, the Philadelphia City Paper took over the third floor. The Spiral Q Puppet Theater and a paving/asphalt company were among the last office tenants.

By the end of the 1990s, with much of Center City on an upswing and 13th Street seemingly trapped in its seedy past, the Center City District and others hoping to improve the situation took action against the the check cashing company Currency One, which was to take over the entire ground floor space. Opponents to the check cashing outlet said that the zoning didn’t allow it. Westside Check Cashing and Pawn Shops Inc–Currency One’s parent company–argued the store was a “financial institution,” allowed in the district. After a two year fight between Westside and the East of Broad Improvement Association, the Zoning Board of Adjustments ruled that Currency One could open. 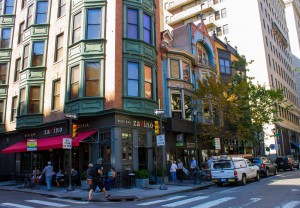 In 2002, the legendary real estate developer Tony Goldman took control of the building and went about converting the upper floors into luxury apartments, following the designs of Erdy McHenry Architecture. He renamed the building the Lofts at 1307 Sansom. Currency One stayed in the retail space until 2008 and was finally replaced in 2009 by the wine bar and pizzeria Zavino. In 2012, the Mural Arts Program installed a massive mural called Personal Melody, designed by New York City-based twin brothers known as How & Nosm. The work was installed on the building’s large party wall. It was painted over a 4-day period from a 125-foot lift.

While this fine building is one of the only traces left of Felix Isman’s empire in Philadelphia, many of his developments still stand in New York. Most notable among these is the Jamaica Estates section of Queens, which was entirely built by Isman and his business partner Ernestus Gulick.