Sunny Strobe Lights On The El With Yiayia

My grandparents were farmers on the tiny Greek island of Hios (or Chios) in the Aegean Sea, off the coast of Turkey. The place was pretty primitive as recently as the 1960s, with only a few paved roads and little evidence of modern life. 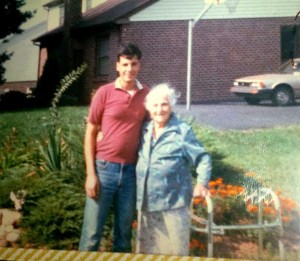 The author and his Greek SEPTA-ridin’ granny in 1987. | Photo: Harry Kyriakodis

Being mechanically inclined, my father came to America about that time with his new wife to start an auto repair garage, bringing with them my grandmother, his mother. (His father had died on the boat coming to America.) Yiayia Lemonia (“lemon drop” in Greek) was very much like the grandmother in My Big Fat Greek Wedding, including her possession of a loathing of anything having to do with Turks–or Germans, for that matter.

Yiayia Lemonia took care of me as a child and, since my dad’s garage was open on Sundays, she insisted on taking me to church every week. So, in the early 1970s, she and I would bravely take the Market-Frankford El to Saint George’s Greek Orthodox Cathedral, at Eighth and Spruce Streets. (See my piece about this storied church HERE.) Yiayia Lemonia was fiercely independent and had memorized the route since neither of us could read the signs. Note that she didn’t have to pay a SEPTA fare because she was too old (in her 80s), and I didn’t have to pay because I was too young (between six and nine). 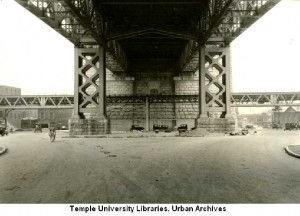 The El in its original configuration under Benjamin Franklin Bridge at Front Street (looking east). Interstate 95 goes through this site now, with the elevated in the median. | Photo:  Temple University Urban Archives

I remember the excitement of taking the bus through Northeast Philadelphia to Frankford Terminal (long before it was renamed the “Frankford Transportation Center”), and then finishing up with another bus ride along Eighth Street to the cathedral. The twin highlights, of course, were the rides on the El in each direction. These weekly rides must be why I’ve had a life-long fascination with trains, subways, and urban infrastructure.

The most thrilling part of the train ride: the transition from the elevated portion of the route to the subway part as the subway cars passed through the eastern portal. At this point in the ride, the train wheels made a tremendous squeal as the line turned towards Center City to the west. Moreover, sunlight streamed though a series of openings in the side of the portal shed, producing a strobe light effect as the train moved by. This flashing display of sunlight was breathtaking, and my grandmother was similarly impressed. Morning commuters during the week must have loved this vivid sound and light show. At the very least, it must have awakened them for the busy work day. The strobe effect was particularly striking. I wonder if anyone else remembers it, as the effect disappeared in the mid-1970s, when the El was moved.

Construction of Interstate 95 forced the relocation of the original eastern portal alongside Front Street to an area between the highway median in 1977. The work also closed the Frankford El’s Fairmount station, which was replaced by the current Spring Garden station, also within the I-95 median. 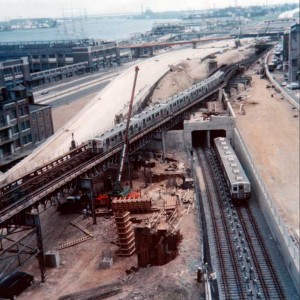 The construction of I-95 and the relocation of the Frankford EL immediately south of Race Street. This photo was taken from the Benjamin Franklin Bridge, looking south. | Photo: Author’s collection

Furthermore, the El’s overhead structure on Front Street was eliminated for a mile north from the Arch Street portal all the way to Laurel Street in Northern Liberties.

This stretch of Front Street had not seen the light of day in half a century. The only indications today of the El having been over Front Street in that vicinity are the handful of concrete patches on both sides of the road, especially between Callowhill and Spring Garden Streets. These patches cover the old foundations of the El’s supports that straddled Front Street.

The construction of I-95 had an enormous impact on the Market-Frankford Line, both in function and personality. Little nuances like the strobing lights are always disappearing as we rethink and reshape Philadelphia. It is a shame but a fact of life that these unique bits of urban memory will be gone forever when people as old as I am are gone.

Speaking of being gone, Yiayia Lemonia passed away in 1987. It was in early October, so I tend to think of her more around this time of year. She was supposedly 96 years old, but neither she nor anyone else was sure of her age, since the island of Hios didn’t record births in the late 1800s. The whole family was with her and I was holding her hand when she died.