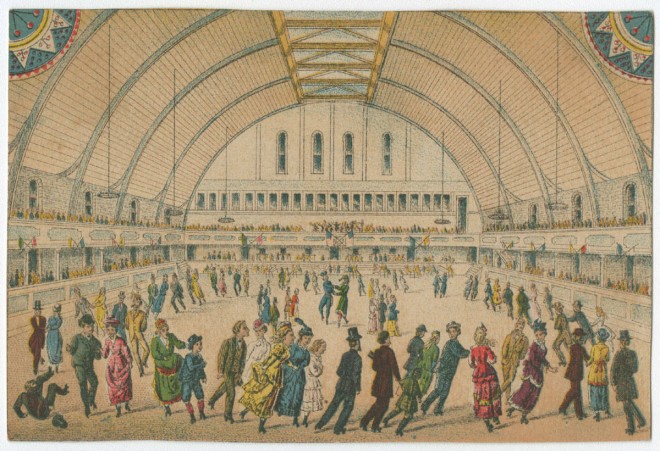 Following the Great Depression, families now with income to spare flocked to Philadelphia’s avenues to socialize and to be entertained. They went to eat and to shop and to see movies. There were more than 400 movie theaters in Philadelphia, as I reported on these pages last year, most of them in neighborhood shopping districts. They also loved to roller skate. Almost every Philadelphia resident was a short trolley ride away from a rink. And just as some of the old movie houses still remain–over 100 of them put to other uses–roller rink buildings too have survived. 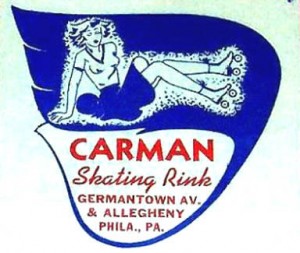 A few, like Carman Gardens on Germantown Avenue, where we’ll celebrate the Hidden City Daily’s third anniversary October 3, are still open. (You can find out more about the skate party and fundraiser HERE.)

Unlike movie theaters, roller rinks do not require a great deal of infrastructure. Virtually any spacious room can be adapted for use as a rink. Of the 23 rinks that opened in Philadelphia between 1900 and 1970, less than half were in buildings that were constructed with roller skating in mind. Fourteen were installed in structures that originally served other purposes, eight of which were originally theaters. Examining this phenomena a little closer, I came to see realize that three types of rinks existed in Philadelphia during the heyday of roller skating: the traditional purpose-built rink, theater-turned-rink, and rink housed in buildings with multiple, changing uses.

Americans’ interest in roller skating has waxed and waned over the last three centuries. Only handful of roller rinks were built in the late nineteenth century. Those that were purpose-built featured lush ornamentation inside and out, and amenities comparable to movie palaces, including parlors and “retiring rooms.” Two local rinks from this era–the Philadelphia Skating Rink at 21st and Race Streets and Chestnut Street Skating Rink at 23rd and Chestnut Streets–are classic examples of mid-19th century roller skating opulence. 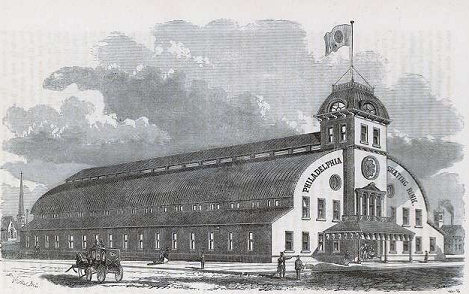 The sport really took off in the late 1930s. Due largely to the wholesale marketing efforts of the Roller Skating Rink Operators Association, the construction of thousands of rinks blanketed the nation. According to Lou Brooks, the author of Skate Crazy: Amazing Graphics from the Golden Age of Roller Skating, there were over 3,000 American rinks by 1942.

Of the twenty-three roller rinks in Philadelphia, ten were purpose-built. Located on commercial corridors throughout the city, purpose-built rinks typically look like minimally decorated warehouses. Function dictated form: the floor–either wood or plastic–and air quality inside the rink were more important to customers than the building’s appearance.

A collection of Philadelphia skating rink logos from the 1940s and 1950s:

Only one purpose-built rink remains open for business in the city: Elmwood Roller Rink at 71st Street and Grays Avenue in Southwest Philadelphia. A modest venue with little distinction today, Elmwood Roller Rink was once a state-of-the art facility, as evinced in a 1947 issue of Billboard Magazine advertisement. Elmwood boldly declared itself “one of the finest in the east” and pointed to endearingly antiquated amenities such as picturesque scenery, Hammond organ music, and a complete change of air every three minutes.

Unfortunately, only two other examples of purpose-built rinks survive today: Circus Gardens at 3155 Frankford Avenue, now a Family Dollar, and Concord Roller Skating Rink at 7049 Frankford Avenue, which was repurposed into a Mr. Storage facility. 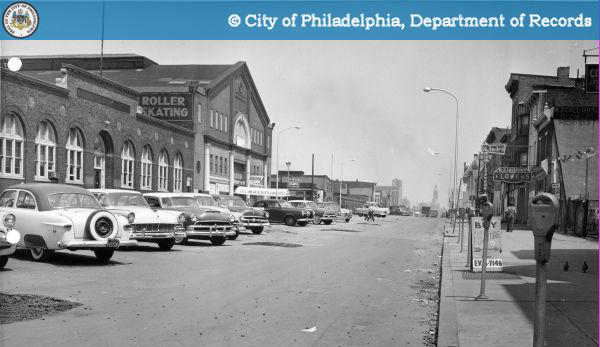 In  1944, ten years after the Metropolitan Opera House had closed, “ballroom operator” Charles Solomon announced plans to transform the building’s first floor into a skating rink. According to Billboard Magazine, “Increasing popularity of roller skating here, particularly among war workers, resulted in Solomon’s considering the conversion.”

Typically, theaters-turned-roller rinks are impossible to distinguish, detectable only by historic records and the faint remnants of ghost signage. A few examples of rink conversions include: 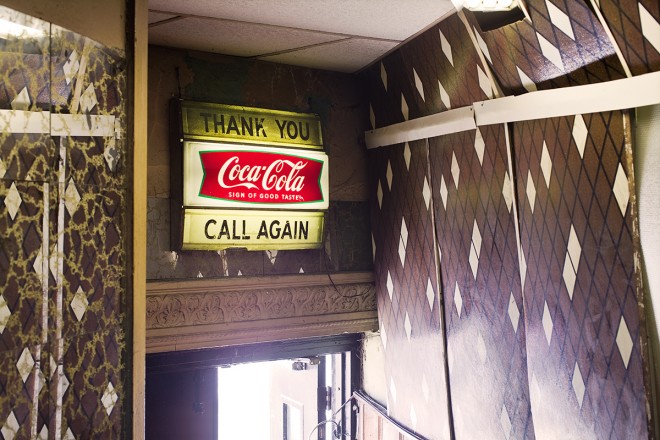 The original ornate plaster work from when Carman Gardens was a theater can be seen over the door frame | Photo: Peter Woodall

Carman Gardens at Germantown and Allegheny Avenues in North Philadelphia is the only remaining theater-turned-roller rink open today. Established in 1932, it is the oldest continually operating roller rink in Philadelphia and may be one of the oldest in the country. Open from 1920 until 1929, Carman Theater was converted into a rink shortly after entertainment entrepreneur William C. Carman built a much bigger 2,200-seat theater at the same intersection.

Traces of the old theater still exist today. The brick walls feature simple pilasters topped by capitals that seamlessly transition into crown molding. The projection room and office, located at the top of an elegant staircase, are used to store equipment. The slanted floor, built so that all movie patrons could see the screen, is hidden beneath a level of well-maintained wood.

These theaters-turned-rinks have fared much better than purpose-built rinks, though many are in jeopardy of demolition or decay as they await a third act. Five of the eight originals are still in existence today. 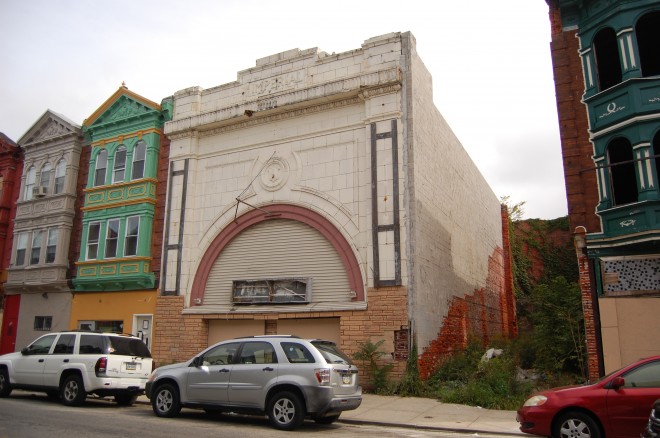 Entrance to the Imperial (formerly the Imperial Theater) at 60th and Walnut Streets in West Philadelphia | Photo: Sam Margulies 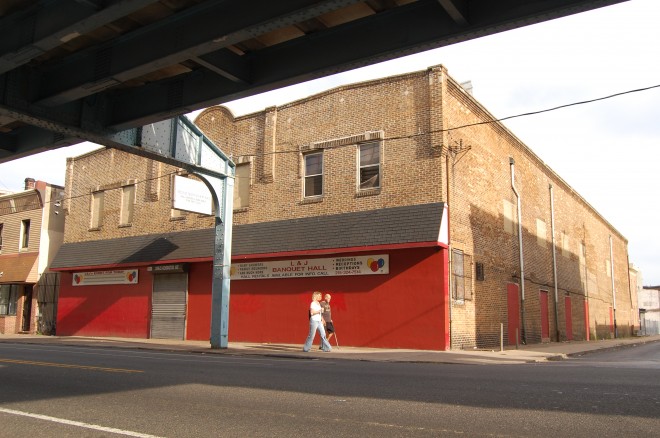 In the mid twentieth-century, entrepreneurs inserted roller rinks into mixed use buildings like private halls and even Catholic schools.

Dance Box Roller Rink is a recognizable example of a rink housed in a multi-purpose building. Now home to Philadelphia International Records, the rink was located on the second floor of the building at Broad and Spruce Streets. Dance Box was open most evenings, charging men 40 cents for admission and women only 30. 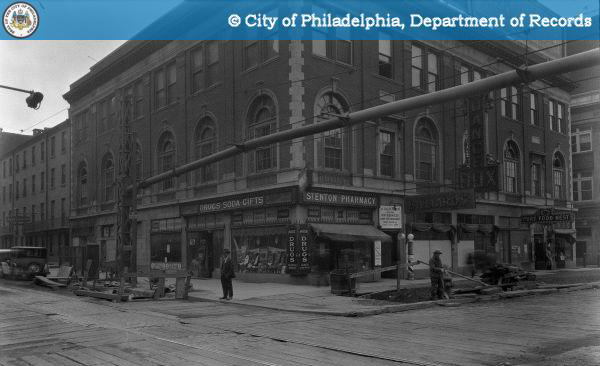 The second floor Dance Box in 1929 | Photo: City of Philadelphia, Department of Records

The original use of the large building that would become the El Torian Skating Palace, now Bella Vista Beer Distributor, at 11th and Catharine Streets remains unknown. It appears to have been owned by John J. Tyler before being converted into the El Torian, one of the largest roller rinks in the city. It boasted “the sweetest music you’ve ever skated to” and “cushioned floors.”  The El Torian was a well known breeding ground for talent and routinely sent its most gifted patrons to the annual Daily News-sponsored roller skating championships. 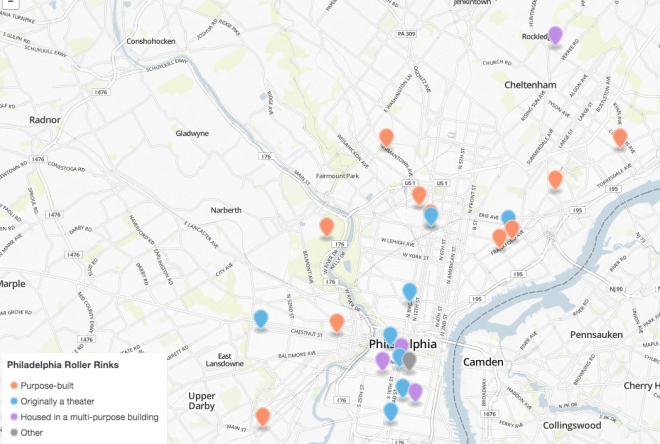 The interactive version of the map can be found HERE

Author’s Note: Special thanks to Natalie Wright and Sam Margulies for their assistance.