Hot Or Not, Part II: A Drive-By Critique

Editor’s Note: Philadelphia’s building boom has caught its stride and the shape of the city is shifting like tectonic plates on overdrive. Ever the trusty judge, we have once again asked University of the Arts industrial design professor and design practitioner Jason Lempieri to weigh in on these new additions to our built landscape. He calls this “drive by critique.” We think he makes some weighty observations. See our first “Hot or Not,” from February 2013, HERE.

So Jason, HOT or NOT? 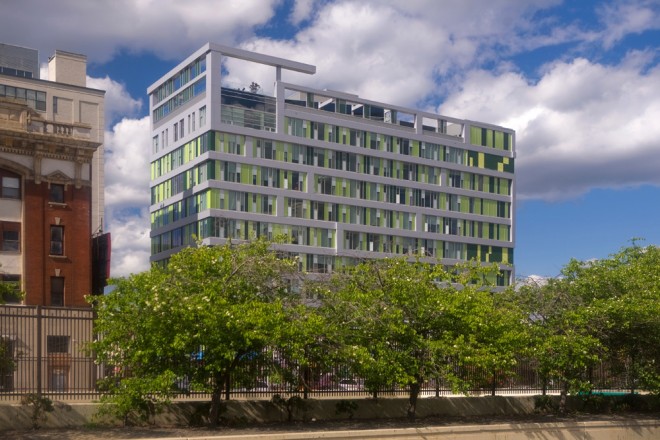 The architects gave an older industrial concrete frame a bright and varied coat of vertical, insulated cladding, which is both welcome and smart. Yet, the labor fiasco which cast a pall over the renovation process is an ironic reminder that we are still building the old way, and that this is just new garb for an old union city building. Even more, rumor has it that the building is infested with tiny inflatable rats. (Hidden City explored the union conflict at Goldtex HERE.) 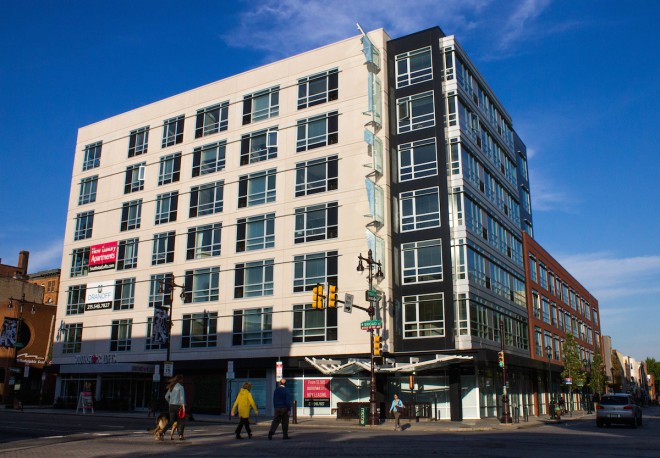 With the site’s potential limited by an underutilized Floor Area Ratio that diminishes the value of its location, this apartment complex is left reaching far for the stars. If any site called for a reevaluation of its height limitation via variance, this is the one. It is also surprising that the owners of such a large development project only acquired 85 percent of the South Street side, awkwardly leaving two attainable townhouses. Further, the “artwork” hangs clumsily and incongruently over the Broad Street subway entrance. At least the sidewalk is passable. 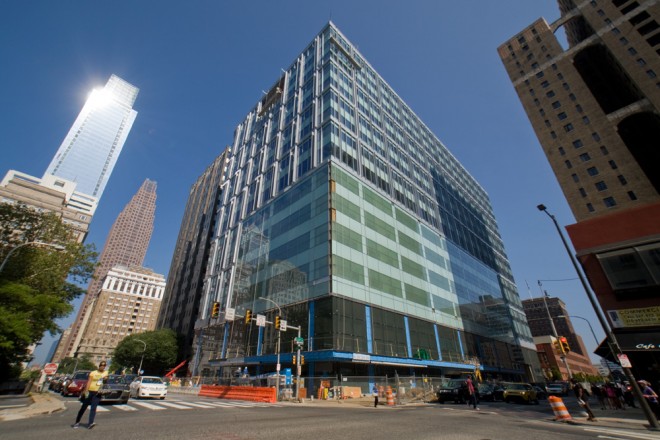 Relying on the adjacent Vincent Kling-designed MSB and FCFHA’s 1515 Arch Street for scale and façade pointers, the Family Court is an apropos cold edifice. Didn’t have to be, but that’s what happens when you have a visual illiterate strong-arm a project. Still hoping the ground floor will have a restaurant called Last Chance Café. At least the former Vine Street courthouse will have a livelier afterlife as a hotel, which could engender more family court disputes. 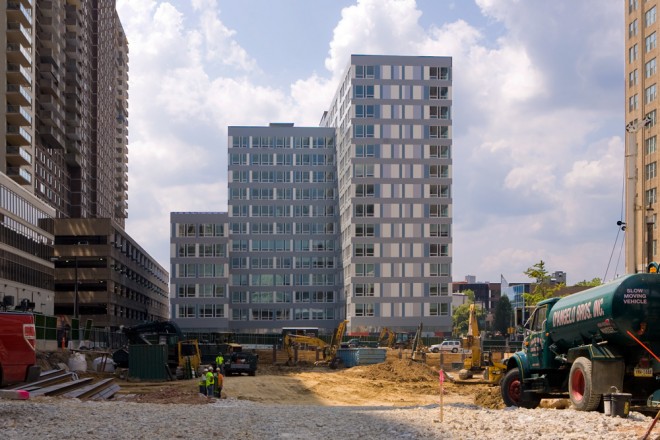 Zzzzzzzzz…Huh? What? Sorry, must have fallen asleep looking at this residential complex and its regularized window pattern and gray cladding. The good news is that if Norman Foster can squeeze out anything nearby and it will look amazing in comparison. Good thing nothing like this will be done again soon…wait, what’s that happening on Columbus Boulevard? D’oh! 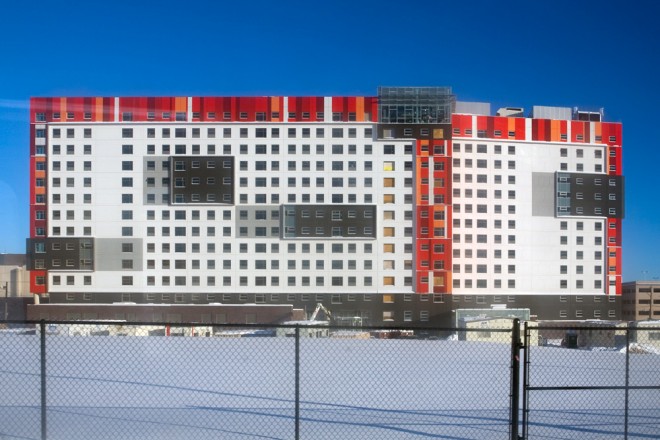 The View at Montgomery, Temple University – Trying too hard to be cool

Running along the south side of Cecil B. Moore, this student housing slab shifts in two to break up its massing and signal an entry point. Student amenities abound and reveal themselves with welcome architectural skin changes that often afford larger views to its residents. Yet, there is a disconnect between its thick, angled ground floor columns and the box-shaped slab above. Further, its bold use of color seems like a desperately oversized dressing to placate its nesting Owls. A poor man’s Unité. And students: beware of the Hogwarthian stair. (Hidden City profiled this project HERE.) 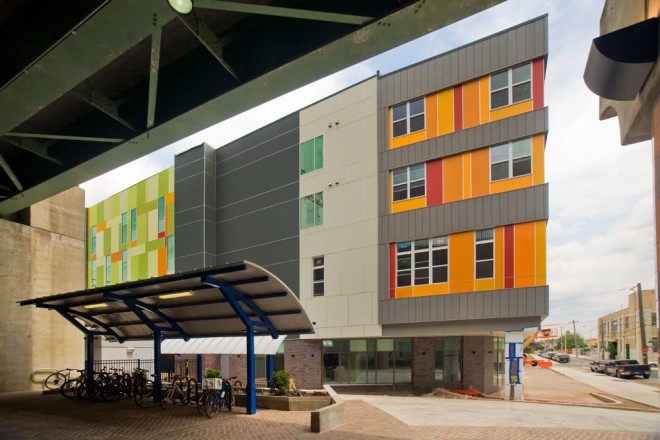 With SEPTA tracks on one side and an evolving neighborhood on the other, Paseo Verde provides a dynamic view (¡sin mural!) from the former and an inviting streetscape to the latter. The corner is appropriately emphasized with a taller element, which is supported by a V-shaped column configuration leaving the ground open for passage. This is a carefully integrated housing project where all players (APM neighborhood, developer, architect and SEPTA) clearly collaborated well. Hopefully, Paseo Verde will translate into better designs by other developers and architects. 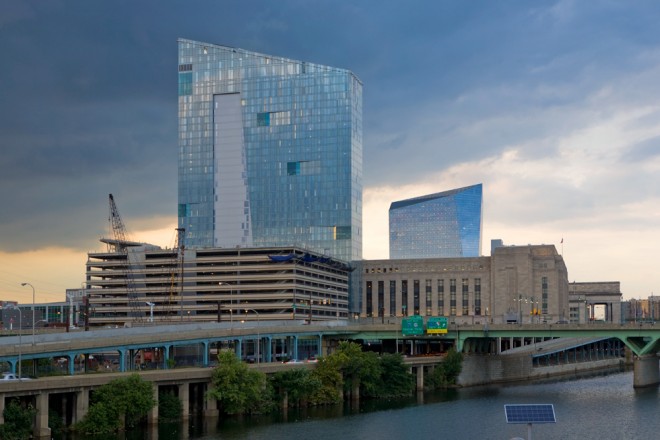 Evo – Hot as an August Evening

There is much to appreciate about the form and façade articulation of EVO, a 33 story high-end student residence tower across from the Art Deco IRS building. When approached from a distance, the pitched form counters the Cira Center in perspective. The subtle changes to the facade and the varying transparency of the fenestration become more apparent as the viewing distance decreases. Any ground level activity will help humanize the intersection on Chestnut Street. The only thing that could ruin it would be a less articulated building to its south. Ahem. (Hidden City profiled this project HERE.) 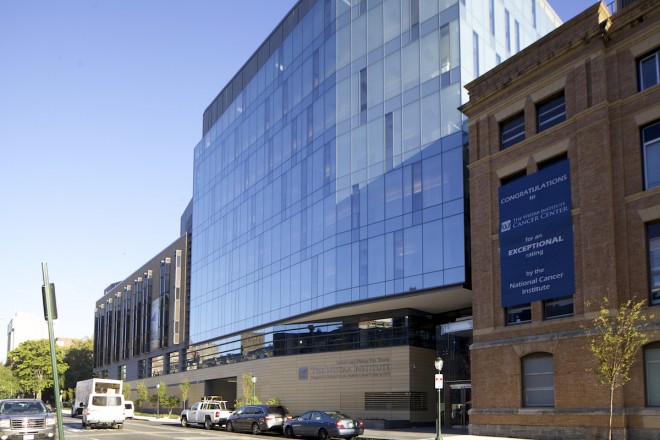 A subtly glazed jewel gives new life to the erstwhile Institute adjacent to Penn’s campus. The large glass central massing is bookended by brick history on the east side and a revamped laboratory space on the west side. A belt of new glass harnesses the western portion and expresses the general movement near the site. Pushed-in glazing at ground level on Spruce Street reveals the older eastern portion while generating an evident entrance (the Institute’s first public entrance in some time). Overall the design is careful and necessary, just like the extraordinary research within. 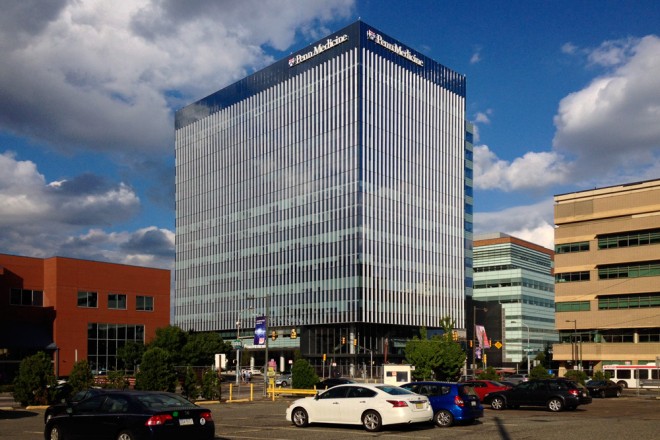 A simple glass box on a smaller, transparent podium makes its presence known through scale and site. The verticality of the glass curtain wall helps to combat the building’s girth. Yet, its corporate nature is all too visible. Hopefully, the work inside will be more innovative than the outside. 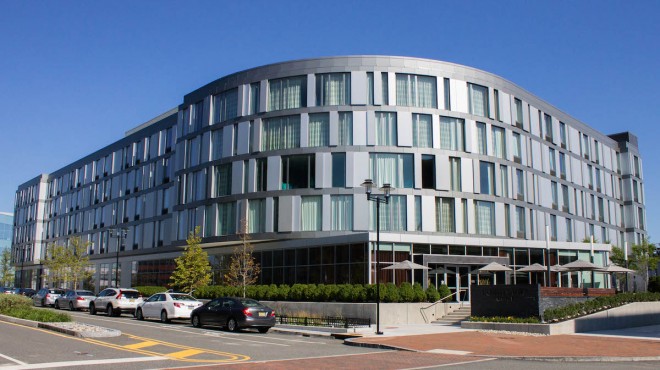 Courtyard Marriot at the Navy Yard – Hotter than the average hotel

Despite its location, this is no suburban hotel. The large scale, varied fenestration and undulating massing help to break up the obvious standard layout of hotel rooms. Views toward the river and the stadium complex connect the hotel to the city. In sixty years the hotel will either be fully integrated with the city, or only accessible by boat.