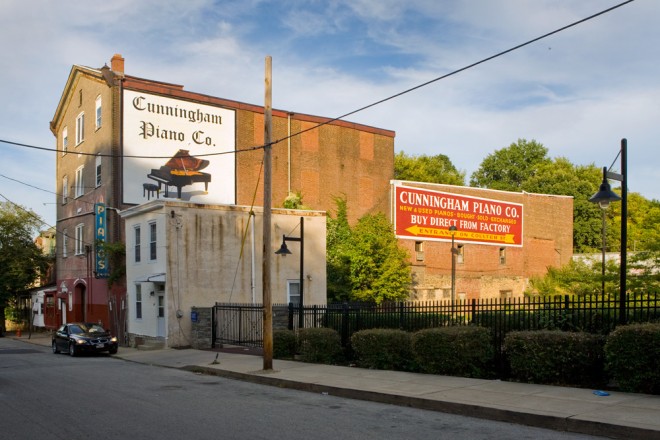 The Cunningham Piano Company is housed in two unassuming buildings; one is the birthplace of Louisa May Alcott and a former Masonic Temple, the other is a stable turned casket warehouse. It’s across the street from where George Washington often slept and in the heart of historic Germantown. Both buildings have stories they could tell. Instead they share music — filling the air around them with sonatas and more. Currently engaged in exterior sign restoration, the City of Philadelphia Mural Arts Program is making sure that Cunningham Piano Company will look as good moving into the future as it has sounded for over a century. 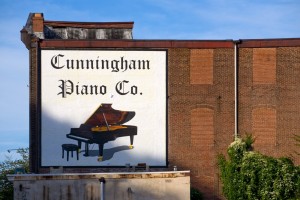 A pet project of sorts, Mural Arts is working to bring back definition and dynamic color to signs that have stood untouched since the 1950s. The idea for restoring Cunningham Piano’s exterior came as an unsolicited and welcomed surprise to Tim Oliver, the company’s co-owner.

“One day a man came in and almost apologetically asked, ‘I hope you won’t mind if I ask you a question but would you mind if we restored your signs…no charge?’,” said Oliver. He and fellow co-owner Rich Galassini were more than happy to see the project initiated. The weather-beaten and faded signs had become easy to miss. Work began almost immediately.

While the signs don’t really qualify as murals they can indeed be defined as historic signage. “Seeing them restored gives us a sense of pride–it’s like seeing history brought back to life,” said Oliver.

Stand outside Cunningham Piano Company’s factory on Coulter Street and what you will hear are some of the world’s finest craftsmen coaxing beauty out of brokenness. Some of the men are second and third-generation experts in the delicate art of restoring vintage pianos. Several have joined Cunningham Piano after completing long apprenticeships in other shops where they became masters in one narrow skill of the many that comprise piano restoration. There are hundreds of intricacies and 5,000 moving parts involved in rebuilding pianos. 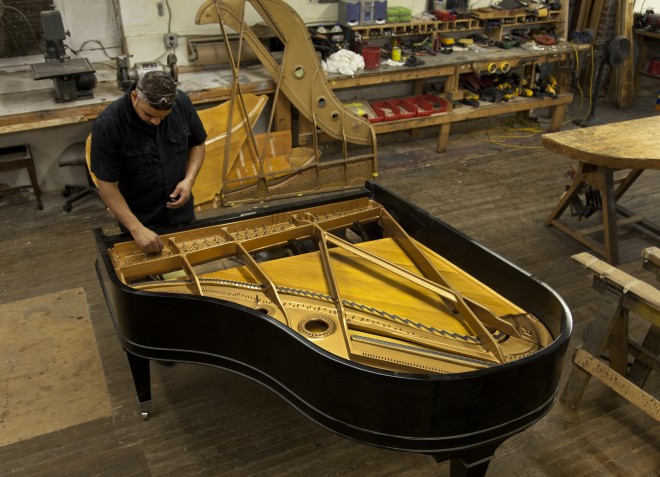 All of the men are preservationists–the specimens they restore are not only antique instruments but architecture that can be heard, history that can be seen and felt. Concert quality instruments and family heirlooms are entrusted to their care for months at a time to the tune of tens of thousands of dollars. At Cunningham Piano all of the work takes place on two floors of the building, accompanied by the sound of old creaking floors and the warm scent of wood varnish.

Wander into the formal showroom a block away on Germantown Avenue and what you will find are Bosendorfers, Steinways, Mason and Hamlins, and Cunningham Piano’s own brand of “Matchless Piano” among other names that command respect in the world of music. You may also find an impromptu concert underway. Performances by renowned pianists here are not uncommon. Cunningham Piano’s collection of instruments and its reputation as the most comprehensive piano restoration facility in the United States brings musicians from around the world to its doors.

Looking from inside the freight elevator onto the floor Cunningham Piano factory | Photo: Joseph E.B. Elliott

The company was founded in 1891 by Irish immigrant, Patrick Cunningham. Its original location was in Philadelphia at 50th and Parkside Avenue, with a showroom located at 11th and Chestnut Street. It wasn’t until after World War II that the business moved to its current location in Germantown, where, almost 70 years later, it has continued to flourish as a local and international classical music destination. Customers come from as far as Vienna and Beijing for pianos that can cost upwards of $80,000.

The Mural Arts team is still in the process of completing the Cunningham Piano project. They have determined which signs can be restored and what needs a complete overhaul. They have repainted one sign, restoring it to its original dynamic color and form. A second, smaller sign, located near the corner roofline of the building, was built from scratch in the style of Cunningham Piano’s original logos. 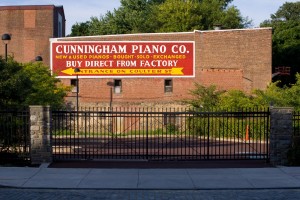 New paint puts a smile on Cunningham’s facade. This sign was rendered from an old company logo. | Photo: Bradley Maule

Next up will be the front of the factory building where all of the lettering has faded to the point of near invisibility. Mural Arts will begin work on this next phase of the project as soon as PECO has removed a fuse box from the front of the building so that restoration work can progress safely.

“We’re more of a destination that a drop-in location so the signs are more for fun,” said Oliver. In the end, investing the time in bringing these old signs back to life will undoubtedly strike a bright note for a company proud of its past and optimistic about its future.