W/N W/N (Win Win) Coffee Bar–perhaps its name says it all. The new cafe, at 931 Spring Garden, aims to create a new kind of urban environment on a rough and tumble block once home to Milton Snavely Hershey’s first confectionary shop (and now, in that same building, Colisimo’s Gun Shop–“The Gun Range”). W/N W/N hopes to capitalize on new investment going on here, at the edge of the Eraserhood (we’ll call it that as long as David Lynch fever is hot), including the music venue Union Transfer, which opened in 2011. For our extensive history of Spring Garden Street, click HERE.

Cooperatives run on consensus, leveling both the hierarchy of ownership and the culture of a competition. Applying co-op business models to the food service industry is a growing enterprise that has gained a considerable momentum in the last decade. W/N W/N is following suit with their own brand of decentralized decision making. The team is made up of “A bunch of guys in their twenties and an old guy,” says Kevin Gillen, developer. Gillen, the “old guy” with some 30 years of building experience, is calm and open-minded. The other seven come from varied, eclectic backgrounds, though they all cohere in a thoughtful blend of spirited collaboration. Win Win–waste not, want not + wnwn = W/N W/N–found their space “as an accident of necessity,” says William Darwall, co-owner and former urban studies major. It was a matter of “being able to carve out a little space in the interstices of massive capital developments, a zone where we could afford to take out the lease. We’re small fish and we know it,” he says. When the bike shop guy next door tipped them off to the former Siam Lotus Thai restaurant while they were looking for a place to rent, they knew it was a perfect fit. The space spoke to them. Here they could channel their business and personal philosophies. Having a liquor liscense attached to the lease didn’t hurt either. 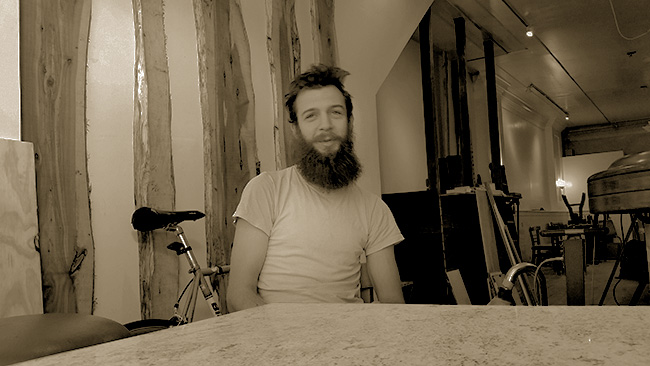 The coalition of eight have assembled themselves into action teams by their expertise–building, finance, outreach, marketing and food. “We’re about operating as equitably and democratically as possible,” says Will Darwall. “No grand theorizing. High quality and low pretension.” A transplant from Ann Arbor, Michigan, he sees Philadelphia with having less constraints. It is a place where he is “freer to pursue things in the way that I want to.”

Plans are coming together at Win Win | Joseph G. Brin

Every cafe is its own culture. The Win Win group wants an environment that speaks to their personality and ideals–a straightforward, friendly and open cafe. Their attitude and non-hierarchical structure stems, in part, from time most have spent in the restaurant and cafe industry. With a few years in the service industry under his belt, Darwall thinks that employees often know more about how to run the business than the owners do, but are seldom consulted. Starting a cooperative cafe is one way to avoid the “owner knows best” quandary. 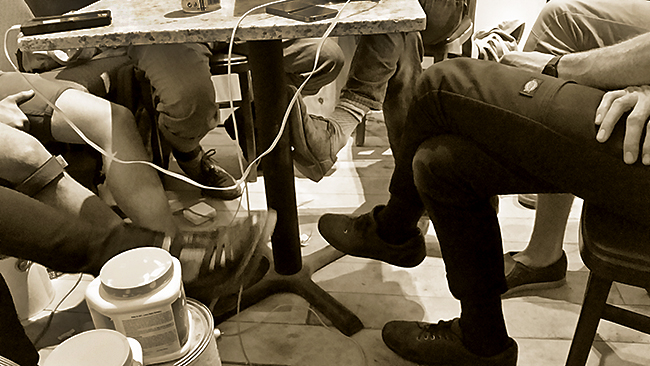 “Win Win employees will represent the demographics of the city of Philadelphia,” says Darwall. Additionally, they will serve only locally sourced brews, produce and pastries, an approach that promotes a “solidarity economy,” as he calls it. Their goal is to build community and business relationships that are mutually beneficial rather than competitive. For a city that does not exactly thrive on excess, this sustainable network wants to contribute to a positive, trickle-up economy in its own small way. The group would also like to get involved in the community and eventually host training programs for inner city youth who show an interest in the coffee bar trade.

The collective has a very Quaker approach. Consensus building, anchored in pragmatics, hard work and humor permeates their business meetings. “How do eight people decide on a daily basis what tunes to play?” asks Darwall. “Answer: We will only play good music. Agreed!”

Jumping from theory to practice, it’s a collaborative balancing act in the field. They are all respectful in their exchanges, not talking over one another, giving everyone a chance to have their say.

“Though none of us are, or have much experience practicing with Quakers, the similarity between our organizational processes and Quaker practices definitely isn’t a coincidence–Quaker consensus is one of the main cited influences in the tradition of consensus process that I’ve come into contact with, largely in community and political organizing contexts,” explains Darwall.

Significant workplace differences are mediated. What’s impressive is that their process is both methodical and fluid, structured and open in the way disciplined musicians play off each other, picking up queues with a glance. You can take liberties with the material yet still maintain a common understanding, a connection with the efforts of the group.

“In a nutshell, we are commited to the idea that each of us has valuable contributions to make to every part of the project. Consensus process is the way we’ve tried to formalize that underlying commitment.”

The cast has undergone some changes since the idea for the shop was born last summer. It says something about the café that there’s a sense of loyalty even from those who move on. Val Boyle has an extensive background in bartending. When she soon relocates to New York City, she will still play an advisory role from afar. 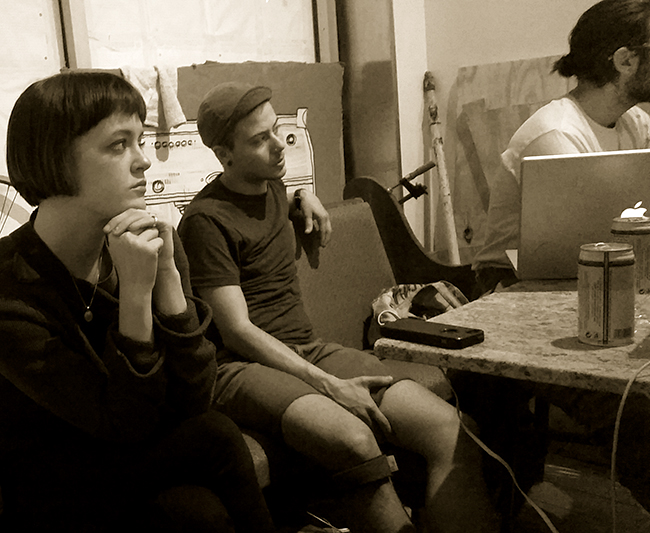 “Seventeen movements is what it takes to make typical mixed drinks,” jokes Darwall. Instead, they plan to have pre-batched punches, cocktails, and six taps of local craft beers. Come in, relax and drink up without the theatrics. A short, inventive menu rotation will aim to provide food and drink of high quality simplicity.

The group is trying to make good things happen on a creative shoestring, calling on a wide network of friends and family, and a crowd funding campaign that will launch in early October. They are honest enough to admit that their approach and plans will always be open to self scrutiny–a group enterprise all the way. That kind of flexibility will keep everything and everyone fresh–owners, customers and coffee.