Breathing Life Back Into Bromley 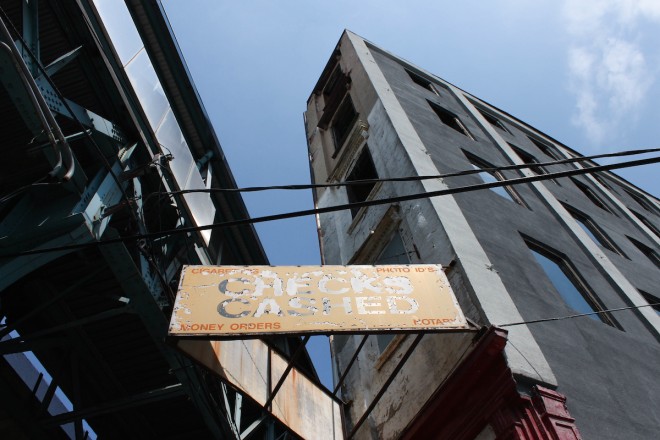 Jesse Muñoz has a lot of patience. After nine years of painstaking negotiations–broken agreements, the indifference of dragging feet, divorces, and the death of a former co-owner–Muñoz finally got his hands on the John Bromley & Sons Ingrain Carpet Factory in 2012. Construction is now well underway at Front and Jasper. Munoz has big plans for the building as well as the neighborhood he grew up in, and he intends to carry his vision through, brick by brick. 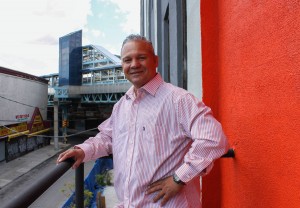 Jesse Muñoz, owner, at the helm of his hard-won mill. | Photo: Michael Bixler

Before Muñoz put his name on the deed, Bromley was a disaster waiting to happen. A massive, 180 year old tinderbox situated right under the El, many feared the building would suffer the same fate as its backyard neighbor, Buck Hosiery, that burned to the ground on May 9th, 2012, taking the lives of two Philadelphia firefighters with it. With Washington Mill just a few blocks away setting the precedent in 2010 for vacant factory infernos in the area, it appeared natural that Bromley was next in line. When one looked up it was impossible not to see a towering catastrophe waiting to happen, a threat not only to the residents and businesses along Front Street but to the infrastructure of the Market-Frankford line itself. As Nicolas Esposito reported for Hidden City in January 2013, it has been a slow, tense waiting game that everyone, including Jesse Muñoz, is happy to be done with.

The natural light cascading into the first floor that is currently being refinished is bright and effervescent. Bromley’s first tenant, Estillia Dance and Fitness, is slated to move in by the middle of September. The studio will offer an array of classes and feature a juice bar. Muñoz is consumed with the details of construction, and despite compromises, is clearly thrilled to be repurposing the building. 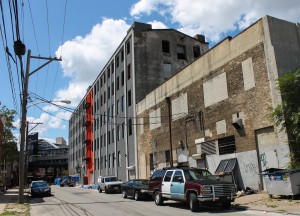 “Keeping the historical integrity of the inside is one way we’re bringing things back to life,” he says, noting that it wasn’t feasible to preserve the building to its original 19th century form.

The architecture firm Harman Deutsch, busy with new construction row house projects across the city, chose instead to keep things rustic, exposing steel I-beams and duct work and the unimposing vaulted ceiling lights that render the space stylishly raw. The result is a cost-effective reclaimed industrial aesthetic that feels clean and contemporary. Genuine approval and even a hint of excitement for the exterior’s design can be gleaned from neighborhood passerbys.

Amy Miller, secretary of the East Kensington Neighbors Association, says that while the design may not an ideal outcome for everyone involved, it is a relief that there is some movement with the building.

“I think there are different opinions about the rehab design. Some like it, some not so much. It’s not exactly historic restoration, but I think the general sense is relief and gratefulness that the building
is being restored instead of ending up as another burnt shell,” said Miller.

Although originally presenting plans for a mixed-use of 40-47 unit residential on the upper floors and commercial work space on the bottom in his original proposal at the East Kensington Neighbors Association meeting in 2012, Muñoz has, for now, revised his approach to the building. For Munoz, focusing on an office-heavy commercial space presents the most practical solution to continuing renovations.

Claire Dych, president of EKNA, is ultimately pleased that Bromley will be saved from a potential fire or dereliction but would rather see the plans for residential units back on the table. “I would personally like to see more apartments near the El as we did a neighborhood plan a few years ago in cooperation with Interface Studios, which called for high-density, transit-oriented development (TOD) near our El stops. If that is their expert opinion, then perhaps it is what is needed. I do know we have a lack of quality rentals in the immediate East Kensington area, and a residential building would invite activity at all hours, as opposed to just daytime activity as you would get with offices. That corner of the neighborhood could certainly use more eyes on the street.”

Muñoz already has a few other possible commercial tenants that he is courting for the first floor. His plan is to appeal to start-ups and non-profits needing more space, lower rent, and flexible leases. Given Bromley’s convenient proximity to the Dauphin-York station, he hopes he can draw these prospects out of their current, more costly leases and into Kensington. Despite the original intent to create a mixture of residential and commercial space, Munoz believes that Bromley’s 40,000 square feet is best suited for retail and work space for now, which he will oblige with a balance of comfortably raw open plan offices and more polished executive suites, with a retail business or two on the ground floor.

The project isn’t yet fully funded. To get the remaining capital he needs, Muñoz will have to prove to lenders that he has tenants. To get the tenants he will need relatively finished spaces. It’s like a game of Tetris. “The biggest obstacle has been convincing the local banks to see my vision. No bank knows what you do unless you say what you do. I’m a musician by trade, not a million dollar developer so it is a bit challenging getting them to see what I see,” he says. For now, he plans to work floor by floor, moving in phases until he can find a bigger loan. He hopes to have the first of many phases complete in six to twelve weeks. 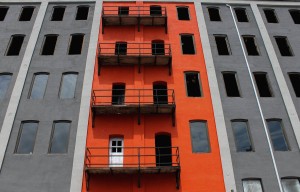 Muñoz sees a sea change for the Front Street corridor within reach, with Bromley as his vessel and an improvement to the quality of life for his neighbors as his motivation. “When you can impact a community, you help a dying Front Street corridor. These Mom and Pop shops, I don’t know how they survive. I think if I can generate commerce here it will trickle down.“ Muñoz wants to start simple, with trees, lights and curb appeal. He believes considerations like these will raise spirits and fortify a mounting interest in revitalizing the corridor. He’s passionate to get started but understanding that some folks under the El might be wary of developers touting neighborhood advocacy. “This building was built for jobs and I want to bring it back to its main purpose. I want to be a part of this change, and have a positive impact, but I’m going to have to do it gracefully.” 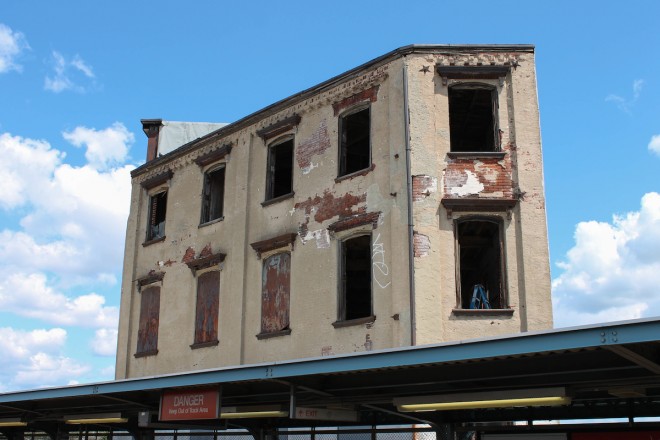