An Antique Swimming Hole Under The El 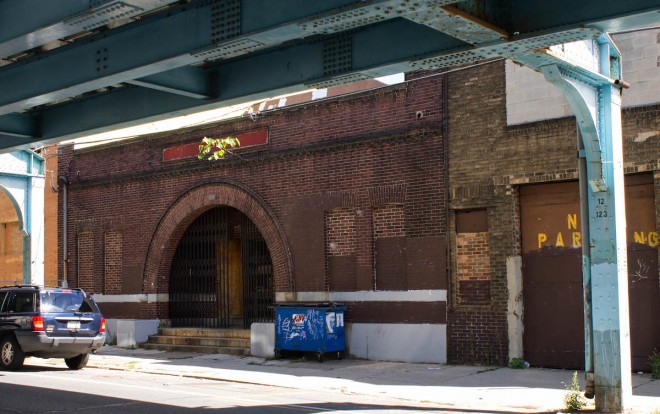 The former Front and Thompson Public Bath adds yet another historical layer of recreational activity under the El. | Photo: Michael Bixler

In the late 19th and early 20th centuries, overcrowded northeastern cities with minimal indoor plumbing were struck with a new kind of problem: keeping citizens clean. In Philadelphia, the city began providing “floating baths”–enclosed areas of the Schuylkill River marked off for swimming and bathing. By the 1870s, the river was too polluted and the floating baths were closed. In search of another solution, the City planned public baths in densely populated neighborhoods. These weren’t exactly traditional bathhouses with bathtubs and showers, but what we now call swimming pools.

Philadelphia was an early leader in the realm of municipal swimming pools. The notion was that swimming during warm weather months would lead to better hygiene. By the 1880s, their popularity caused occasional rioting, when swimmers were denied entry due to crowding. Eventually, reformers launched a private charity called the Public Baths Association to provide year-round bathing facilities beyond the average swimming pool, but only a few of these were opened. 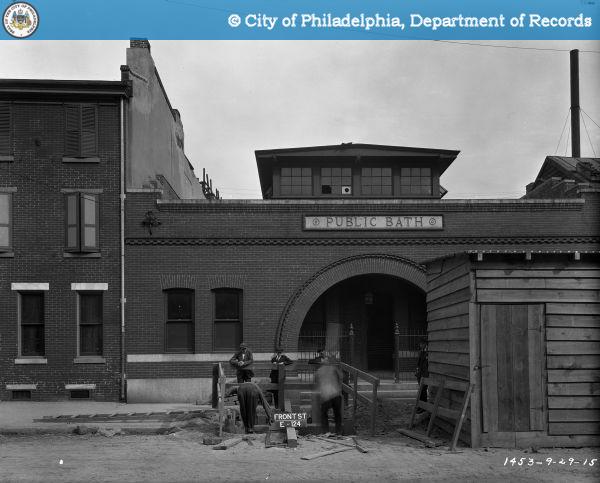 But after swimming gained popularity as a sport during the 1896 Olympics, the city responded by going on a “bathhouse” building spree that would last two decades. Though the vast majority of these structures are now lost, one in particular still stands today under the EL on North Front Street, just below Thompson Street.

On January 19th, 1905, the Select and Common Councils of Philadelphia passed an ordinance authorizing $12,000 from the 1905 budget of the Department of Public Safety’s Bureau of City Property for the purchase of  1241, 1243, and 1245 North Front Streets for “bath house purposes.” Two months later, the Councils approved the condemnation of the three row houses located there.

Construction was slow, considering the small size of the building. Electrical lines were installed in 1906. The Gray and Dormer Plumbing Company installed the water lines and drains in 1907. It wasn’t until the end of that year that the Front and Thompson Public Bath was opened. Public bath houses at the corners of 12th and Reed and 3rd and Queen–both long gone–opened at the same time.

Though the actual architect is unknown, all buildings erected by the City at the time of this bath’s construction was directed by one city architect, Washington Bleddyn Powell. Whoever did the design work in fact did a pretty good job. A large brick arch provides a grand entrance, the front door being set back behind it. The facade is decorated with patterns, sculpture, and a few limestone details. Unlike many of the others of its type, this particular bath was completely indoors. Its roof had a raised section in the middle, a long rectangular segment with windows on all sides. From street level it gave the appearance of a fancy cupola. A large plaque emblazoned with the words “PUBLIC BATH” stood above the grand arch, which was enclosed with an iron fence when not in use.

By 1913, the city’s 20 bath houses drew over six million visits per year. The Front and Thompson Public Bath took in nearly 300,000 of that figure, the vast majority being boys. By 1919, the bath houses were now known as swimming pools and dedicated two days a week for boys, two for girls, and were open 13 hours a day during the summer months.

The Front and Thompson Public Swimming Pool stayed in use for five decades. It was even modernized in 1953. The pool was closed around 1960 and stood vacant for years thereafter. 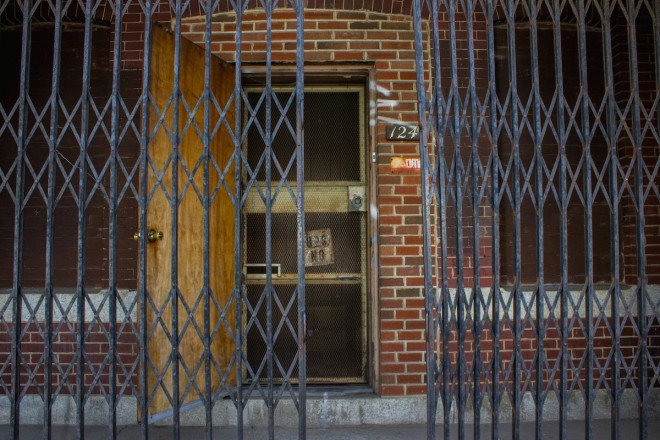 In 1968, the AAA Shoe Refinishing Corporation purchased the derelict building and converted it to industrial use under the designs of architect Ollie Chernianivsky. The collapsed roof was replaced and all the interior details were gutted and rebuilt. The AAA Corp would make use of the old bath house until 1992, when Bob Buraczyk purchased the building for $40,000 and moved his Silber Brush Manufacturing Company in from across the street.

To this day, Silber produces brushes and brooms while the El screams overhead.

The only other example a of surviving municipal pool from the 20 that were built during the “bathhouse” building spree is the Station and Cotton Public Bath House in Manayunk which is now being used as a parking garage. A few of the Public Bath Association’s facilities still stand, most notably the Gaskill Street Baths on the 400 block of Gaskill Street in Queen Village.