A Rich Past And Possible Green Future For Spring Garden Street 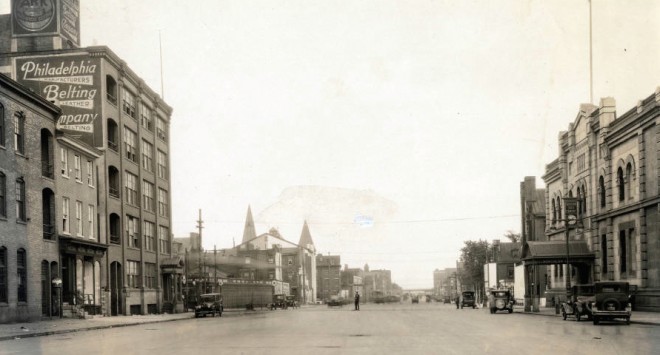 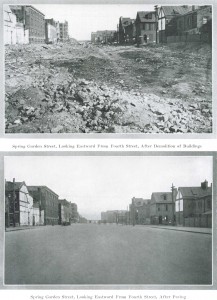 The Pennsylvania Environmental Council is hosting a block party this Saturday to promote the proposed Spring Garden Street Greenway. The project aims to transform Spring Garden Street into the most pedestrian-and bike-friendly thoroughfare in the city. The PEC wants to revive the grand urban boulevard that Spring Garden Street once was, and their proposal is the first step in rethinking the street as it moves east toward the Delaware River.

The history of Spring Garden Street—and the adjacent district approaching the Delaware River—is long and fascinating. Looking back, it is evident why that this once great street is due for a fresh, spirited renewal.

Both sides of current-day Spring Garden Street was first formally owned by Jurian Hartsfielder, a German or Dutch immigrant who acquired the area from the royal governor of New York, Sir Edmund Andros. The deed covered: “[A] certain parcel of land called ‘Hartsfield,’ lying and being on the west side of Delaware river at ye lower end of Cohocksink Creek, to Jurian Hartsfielder, containing and laid out for 350 acres, he yielding and paying yearly to said Duke [of York and Albany] three bushels and a half of good winter wheat.”

This conveyance was granted on March 25, 1676, six years before William Penn’s arrival in the New World. The deeded ground extended between the Cohoquinoque and the Cohocksink Creeks and stretched westward to where Sixth Street is today.

On March 15, 1680, Hartsfielder assigned half of Hartsfield to Hannah Salter. She later transferred the land to Daniel Pegg (ca. 1665–1702), a well-to-do Quaker brick-maker who subsequently bought the rest of Hartsfielder’s property. William Penn endorsed these deals in 1684 and was a welcomed guest at Pegg’s home. The manor house was located on the west side of Front Street, south of where Green Street used to intersect it, near Front and Spring Garden today. 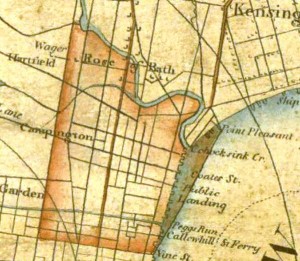 The Northern Liberties District in Philadelphia and Vicinity. This 1808 map shows the military settlement of Campington and the town of Rose of Bath (Bath Town). Cohocksink Creek and Pegg’s Run is also shown. | Zebooker Collection, Athenaeum of Philadelphia

Daniel Pegg’s farmland was regarded as “Pegg’s marsh” or “Pegg’s meadow.” The terrain included a cherry orchard, which was cut down for fuel by British soldiers during the Revolutionary War. Once called Cohoquinoque Creek, Pegg’s Run is now a sewer that runs under Willow Street.

As the city grew increasingly congested in the early 1800s, members of the Religious Society of Friends (Quakers) headed north to quiet, undeveloped areas in Philadelphia County. They often moved into the District of Spring Garden, as well as the western part of Northern Liberties.

The more affluent Quakers built impressive Georgian style townhouses in the area, complete with carriage houses in the back. Erected in the mid-1800s, these mansions were usually purchased by Quakers with “new money”–from the city’s nascent industrial boom. The Spring Garden District was one of the best neighborhoods of Philadelphia in the 1840s. 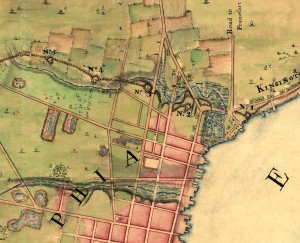 The British redoubts through Northern Liberties. The British barracks of Campington are in the lower center of the image.  | Surveyed & drawn by P. Nicole, from the Library of Congress

Examples of these grand mansions remain on the 700 block of both Eighth Street and Franklin Street.

The tranquility didn’t last long, though, and unrest grew among Quakers. Several events that led Hicksite Quakers to split from the Orthodox in 1827 occured at the Green Street Meeting House, which was located at Fourth and Green, next to where Spring Garden Street came to be. Itinerant preacher Elias Hicks visited there in 1822 to profess that the “Light Within” was the source of all revelation. A bloc of Philadelphia Friends disapproved of Hicks’s interpretation of Quakerism, which led to a vast schism among the Society of Friends. One branch became Orthodox Friends and the other became Hicksite Friends. This split persisted until 1955.

The Green Street meetinghouse passed to the Hicksites, who held meetings there for decades. But as the neighborhood began losing its appeal after the Civil War, Quakers started moving from Spring Garden and Northern Liberties to other sections of Philadelphia and eventually out of town entirely. The meetinghouse was sold to the Philadelphia Quarterly Meeting in 1914. This group gave the building to the Friends Neighborhood Guild to assist the rising Eastern European population of Spring Garden and Northern Liberties. The place became known as the Friends Neighborhood House.

Friends Housing Cooperative was a venture of two Quaker organizations—the American Friends Service Committee and Friends Neighborhood Guild—that were concerned about urban housing. The latter group was founded as Friends Mission Number One in 1879. Its initial aims were to provide a moral and spiritual uplift to poor immigrants moving to that part of the city. The Mission gradually changed to a settlement house for the benefit of Central and Eastern European newcomers. Headquartered at 701 North Eighth Street, Friends Neighborhood Guild has worked to improve housing in the East Poplar corridor since the 1950s. 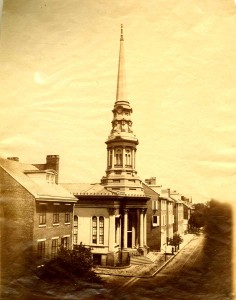 The Fourth Baptist Church at its second location at Fifth and Buttonwood Streets. This was one of several magnificent churches and meetinghouses along Spring Garden Street and vicinity in the 19th century. | Library Company of Philadelphia.

Well before that, the street attracted an interesting mix of theaters and performance halls. The Washington Circus was a frame structure on Old York Road between Buttonwood and Green—around Fifth and Spring Garden nowadays. It was raised in 1828 for a troupe of equestrians and circus acts. Clowns, strong men, and tightrope walkers performed there, as did equestrians. The building was soon converted into a dramatic theater, with seating arranged for audiences up to 1,200. Known as the Washington Amphitheater, it was gone by the 1850s. Around this time, a covered market filled the center of the wide street.

Along with amusements, the Northern Dispensary of Philadelphia for the Medical Relief of the Poor was established in 1817 at Sixth and Spring Garden. The facility furnished free services to those who could not afford medical care. It was the second charity hospital in Pennsylvania after the Philadelphia Dispensary which opened in 1786.

At 600 Spring Garden Street stands the Northern Saving Fund, Safe Deposit and Trust Company building, an early design of Frank Furness and George Hewitt. Resembling a castle of sorts, this structure was said to have been “one of the most commodious and attractive trust company homes” in Philadelphia. It was renamed Northern Trust Company in 1902.

The bank was constructed in 1872 at a time when Spring Garden Street ended at Sixth Street; the road ran only from Sixth to Tenth Streets. The thoroughfare was extended westward to the Schuylkill River and eastward one block to Fifth Street by 1908. The year before, officers of the Northern Trust Company petitioned the city to open Spring Garden Street between Sixth and Fifth Streets. Northern Trust owned most of the properties on the block and sold them to the city for $53,000. Fifteen years later, the street was finally pushed east all the way to Delaware Avenue.

Northern Trust Company changed hands quite a bit before closing its doors. Beginning in the late 1980s, the building began hosting a series of swanky nightclubs: The Bank, District, Transit and 90 Degrees. The building now sits empty, as plans for a tiki bar with a beer hall and a nanobrewery fell through in early 2012. 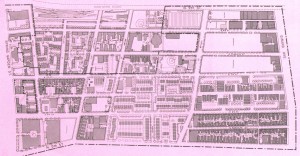 The plan of the East Poplar Urban Renewal Area. |1964 Annual Report of the Redevelopment Authority of Philadelphia

A true boulevard by the late 19th century, fountains, sculptures, iron fencing and trees filled the Spring Garden median. Large houses, churches, schools, and cultural societies lined the street; the German Society of Pennsylvania is an example that remains. The Society was established to assist German immigrants who had signed indentures to work up to five years after their arrival in Pennsylvania—or until their passage from Europe was paid. Founded in 1764, it is the nation’s oldest German organization, as well as the first immigrant-aid group of any kind. Its current home, a handsome brownstone and pressed-brick edifice at 611 Spring Garden Street, was constructed in 1888.

In the 20th century, Spring Garden Street’s medians were turned over to motor traffic. Front gardens were paved over and fences, trees and market stalls were taken down. As the boulevard became a noisy urban arterial road, wealthy residents moved.

Their extravagant dwellings were often turned into boardinghouses and tenements packed with German Jews, Russian Jews, Irish Catholics, and, by the 1950s, Puerto Ricans. By then, the buildings were falling apart—old, overcrowded and substandard, having accommodated waves of immigrants for more than half a century. 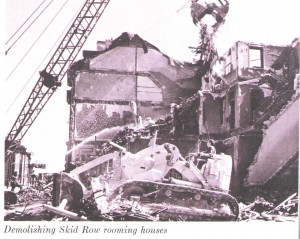 Beginning in the 1940s, the City’s Redevelopment Authority, the first of its kind in the nation, initiated a series of projects in the vicinity of Spring Garden and Poplar Streets, between Fifth and Eighth. The zone was collectively known as the East Poplar Urban Renewal Area.

The Authority’s first development there was Penn Towne, a series of apartment buildings that was the first new Title I construction project in the United States. Completed in 1953, the scheme was devised by Louis Kahn, who had grown up in Northern Liberties. Oskar Stonorov was the architect.

A simultaneous RDA effort was Friends Housing Cooperative, in which a group of old houses was rehabilitated for low-income families. The undertaking encompassed a block of town homes from the 1860s around a landscaped courtyard. This was also the first Title I rehab project in the nation.

The fourth Title I project in the United States included another Philadelphia innovation: the acquisition of land for public housing. The Spring Garden Homes were finished in 1956 and covered eighty-seven acres between Spring Garden and Girard west of Fifth Street. 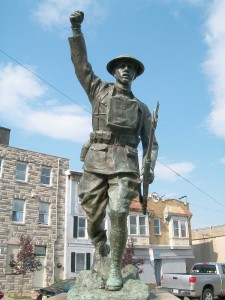 In 1920, Over the Top (aka the Doughboy statue) was dedicated to men of Northern Liberties who lost their lives in World War I. The statue stands at Second and Spring Garden Streets. | Photo: Harry Kyriakodis

Add to all this the Venturi Brown’s postmodernist Guild House, at 711 Spring Garden Street, completed in 1964.

At Second and Spring Garden is the Doughboy statue, a bronze of a soldier carrying a rifle and leading a charge. Over the Top  is one of several comparable works by sculptor John Paulding. The monument was dedicated in 1920 to men of the River Wards of Philadelphia who lost their lives in World War I. It has been generating erroneous midnight calls to police for decades (“man brandishing gun!”).

Over the Top has served as an indicator of Spring Garden Street’s fortunes—at least since the 1920s. It first stood in a tiny triangular park at Fifth and Buttonwood Streets. When the Callowhill East Redevelopment Project destroyed that portion of town, the statue was moved to 17th and Spring Garden Streets. Demands for its return to Northern Liberties in 1981 became an early rallying cry of the resurgent district. The Doughboy then wound up at its current triangular park. A long-awaited rehabilitation of Doughboy Park–aka Madison Memorial Park–concluded in early 2012.

The Pennsylvania Environmental Council’s Spring Garden Street Greenway project will be the first step in rethinking Spring Garden Street as it heads westward from the Delaware River. The celebration on the 900 block will last for just one day, but organizers hope it will strengthen public support to build the Greenway. If and when that occurs, the boulevard will become part of the East Coast Greenway, the 3,000 mile path stretching from Maine to Florida.