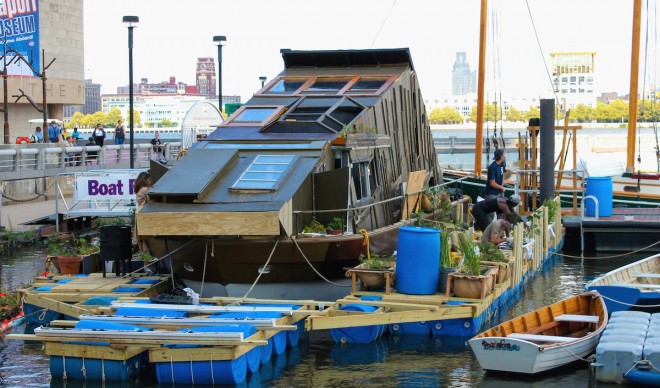 Imagine if an epic storm blew through Philadelphia. A natural disaster on the scale of Hurricanes Katrina and Sandy. River walls are breached and the Delaware comes pouring through town. First your basement is flooded. Next your stoop is submerged. As the storm subsides your entire row house, nay, the whole city is underwater. Your roof is now your home, your only refuge, and to survive you must cobble together food and shelter with resources you and your neighbors find among the wreckage. It is from this brand of plausible dystopia that WetLand, a six-week long interactive installation at Penn’s Landing hosted by FringeArts, was born. 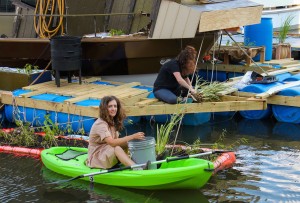 Moored in front of the Independence Seaport Museum among colorful canoes and shiny, happy swan boats, WetLand looks like it floated in from some coastal community on the edges of civilization. The self-sufficient shanty cuts through the chipper scene like an omen. It tells of a future where global warming has come home to roost and cities are decimated by rising sea levels. A day when the global supply chain is non-existent and urban dwellers are left to survive together, building homes, communities, and sustainable food resources on the water.

“The form of WetLand has really haunted me for some time,” says Mary Mattingly, the Brooklyn-based artist behind the project. “Recently after Hurricane Sandy, seeing homes wash into the water and then be rebuilt. It directly relates to being in a continually precarious position, but rebuilding from that. Rebuilding through co-learning, cooperating, and coming together as humans dependent on both nature and the city.”

Known for her ecological installations and future habitat constructions, Mattingly set her eyes on the Delaware due in part to developing a relationship with the Seaport Museum and respect for their commitment to rivers and waterways conservation. She also cites the recent upsurge of projects along the long neglected waterfront as both inspiration and a cause for conversation. 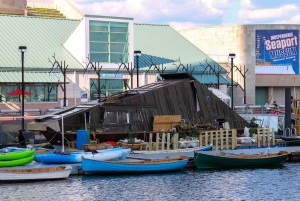 “Of course this area on the Delaware is being redeveloped and our hope is that everything is taken into account as that redevelopment occurs, that no one or nothing is forgotten about in the presence of some people’s potential economic gain. We want to be a reminder of the importance of co-existing with nature and the city, having access to water for everyone, and treating necessary resources with respect.”

The basis for the aesthetic design of WetLand is the Philadelphia row home. With its façade leaning skyward, the structure appears to be either sinking into the river or brazenly emerging from it. The row house motif was built around a 42 foot 1971 Rockwell Whitcraft houseboat and features a number of sustainable amenities. Along with a library, three bedrooms and a substantial commons area, the water habitat also has solar panels, a floating edible garden, a beehive and chickens. The potable water system, devised to capture and purify rain, was designed by the students of The Workshop School in West Philly. The façade, an amalgam of reclaimed wood and windows, was donated by The Resource Exchange and RAIR (Recycled Artist in Residency). 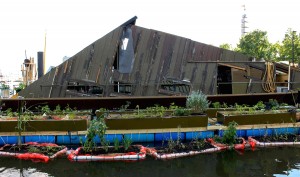 Mattingly and her crew of artists will live on the self-sufficient boat on a rotating basis for the next six weeks. They will be hosting a number of DIY workshops, live music, yoga, and film screenings. The programming is heavily punctuated by sustainability education and community collaboration. The site itself was built as an interactive installation to serve as an urban farm, a center for education, an art studio and, ultimately, a place for community. “I’ve worked to make public, communal, open spaces because I think it’s more time-specific and necessary than always site-specific,” says Mattingly. “Site-specificity to me relates not only to the place, but to its history, its political and economic ties. People who visit it, live there, and interact with it, the flora and fauna, as well as the place’s potential future.”

WetLand opens today and will continue until September 21st. For a calendar of programming and events, check out their website: WetLand