The Wheels of Steal: Scrap Metal Theft Is On The Rise, Again 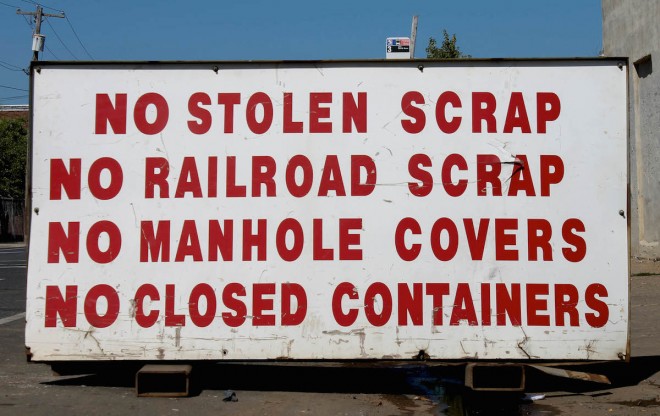 If it ain’t tied down… For some scrappers, everything is fair game. | Photo: Michael Bixler

On sunny days, families stroll along the paved walkways of the Fair Hill Burial Ground, a 300-year old Quaker cemetery at 9th and West Cambria Streets. Kids chase each other around the low-lying gravestones, past the interment sites of famous Philadelphia abolitionists Lucrecia Mott and Robert Purvis. A community vegetable patch grows off in one corner. The space appears to have always been refuge in a rough neighborhood, but the fence surrounding the property tells another story.

In 1875, the cemetery’s caretakers commissioned a builder to install approximately 1,700 feet of speared iron fencing to enclose the four acre site. The delicate looking fence endured for more than a century, until one night in July 1993 when quick working thieves sawed off several sections from their steel posts and stole them in order to sell the iron as scrap. According to Fair Hill’s board minutes from the following decade, scrappers seized the fence again in 1995, this time using a tow truck to unearth two large sections from the northern border of the cemetery along Indiana Street. Another two years later the gates were stolen. Slowly but surely, from the bollards to the lattice panels, more than half of the burial ground’s original fence vanished.

Metal theft is not only a monetary issue for small historic properties like Fair Hill, leaving them vulnerable to further decline, but for City agencies, SEPTA, and business and residential property owners as well. Though the problem, which bewitched the city from 2008 to 2011, has subsided, guarding against illegal scrappers requires significant bureaucratic and legal attention.

At Fair Hill, it forced trustees to scramble to protect the historic cemetery. Faced with the possibility of losing the fence all together in the early 2000s, the Fair Hill board implemented a five-year restoration project, consolidating the fragmented sections of the original fencing onto Cambria and 9th Streets, and then building a new fence on the remaining two sides. 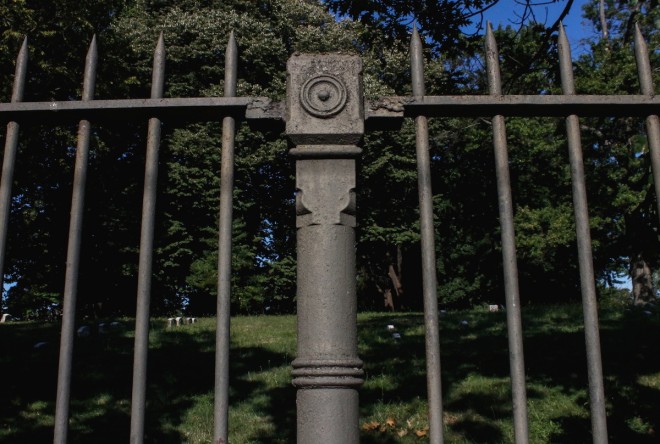 At Fair Hill Cemetery, holding on to the past has been challenging. Nearly a half of the original iron fencing has been lost to theft. | Photo: Michael Bixler

“The challenge was to balance the wish to maintain the historic character of the fence with its cost considerations and the need for a stronger fence,” says Pamela Moore, the secretary of the Fair Hill board from 1993 to 2012, who still volunteers at the burial ground today. “The board also felt some pressure to get the project done as quickly as possible in order to completely secure the fence and the property.”

After all the planning, fundraising, and installation, the fence cost Fair Hill over $100,000. Theft persisted even during the restoration period. Maryanne Hunter, a former trustee on the Fair Hill board, recalls that even the temporary chain link fence erected by the contractor was stolen overnight. In the end, despite aesthetic compromise, the site was secured. But for other institutions around the city the battle against metal thieves is ongoing.

Like gold, the price of metal is tied to the strength of the dollar. After the market crash in 2008, the price of pure copper metal spiked, and by 2011 had hit a near-record high of $4 a pound. Philadelphia was one of many post-industrial cities that experienced rashes of metal theft from both public and private properties in this period, and no quantity of metal was too large or small of a target. Manhole covers, for example, were an easy target. Police reports were filed about brass doorknobs and kick plates being taken right from neighborhood stoops.

If there was one hard-line truth about this peak period of metal theft, however, it was that those with the most metal made for the easiest targets. Chief engineer of SEPTA Andrew Gillespie’s job got a lot harder in 2011 when the transit authority reported a record-high 156 copper thefts. Storage yards in particular had been heavily targeted by skilled teams of metal thieves. They would cut through the razor wire at SEPTA’s secure compounds to loot the scrap bins, scoring tens of thousands of dollars worth of metal in one sting. 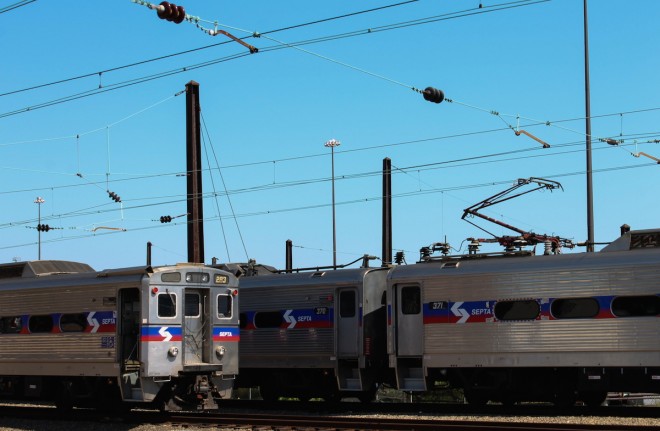 Gillespie and Thomas Nestel, chief of police for SEPTA Transit, also had to contend with individuals stealing from the rail line themselves—not tracks, but copper switches, energized wire, and rail plates–which, though only a nominal monetary loss, posed a threat to the railways and their riders. When someone steals an impedance bond (a $10 value in the scrap market, at best) from the tracks, SEPTA’s system goes into its most protective mode, effectively shutting down services until the piece is replaced.

“You shut down a rail line–between Wayne and Jenkintown, for example–and everybody who goes north, 50,000 people a day, they just got stuck,” Gillespie says. “It may be only for a couple hours, but they’re still stuck, and the economic impact is significant.”

In response to these incidences, SEPTA took measures to armor its railways, secure its facilities, and track down the source of the problem, the scrappers themselves. Nationwide, metal theft got so severe that people started companies based around its prevention. One such company offers a microdot varnish visible only under black light that lets scrap yards know if a piece has been stolen. There’s even a motion-activated GPS tracking system that alerts the police when a piece of metal moves suspiciously from its place. But one of SEPTA’s most effective deterrents has been working closely with local scrap yards.

“We have a hammer,” Nestel says. “The salvage yard owner doesn’t want to end up arrested for stolen property that he knows was stolen.”

Yard owners alert SEPTA if someone comes trying to sell their easily identifiable products, and that’s how the arrests are made. Going by their numbers, the transit authority has succeeded in hardening the target for scrappers. In 2013, they reported only 77 incidences of metal theft–nearly halving the previous year’s total–and Nestle and Gillespie predict a similar figure by the end of 2014. But unfortunately, smaller institutions don’t have the same resiliency as SEPTA, nor is their stolen property as easily replaced.

Enforcing the Law at Scrap Yards

In front of most scrap yards and recycling centers in Philadelphia is a sign that says NO STOLEN SCRAP. While these yards don’t post their processing figures, you can observe any of these big lots for a week and see the overwhelming tonnage of metal that gets brought in over a short period of time. There are protocols in place for identifying some stolen goods, but it would be near impossible to source every fence post or bundle of insulated wire that comes in and out on a daily basis. 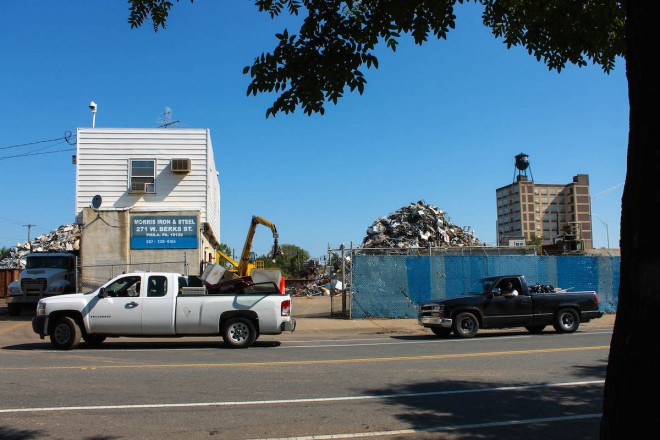 SETPA’s active communication with scrap yards may work on the small scale, however. At Morris Iron & Steel on Berks Street, a contractor comes in to tell the manager to keep his eye out for a 200-pound galvanized curb that has just gone missing from their work site. It’s your best bet, according to Chris Stock, owner and operator of Philadelphia Salvage. “The best thing a property owner can do if they are robbed is to call the police and salvage and scrap yards,” he says. “Have pictures of your items printed up with your phone number and a reward. Post them just off the property of the scrap yard. The reward may entice the scrapper to sell it to you, but I doubt it.”

Stock says that stained glass windows in private homes in Philadelphia have been increasingly targeted. If it was removed professionally, the window was likely to go an outside market for sale. If a scrapper has taken it, the piece may already be unrecognizable, the glass removed or broken and the lead frame sold for petty cash.
“The police and reputable salvage companies are not going to accept the reward obviously,” Stock says. “Have pictures to show your insurance company for a claim if you are robbed. These crimes almost always happen when a home is vacant, usually ones with signs up for sale or obvious construction going on and no one is living there.”

In the last decade, Pennsylvania legislation has tried to deter the purchase of stolen metals in these scrap yards with stricter codes like requiring photo ID and vehicle tag registration for all scrappers. The senate even proposed a bill last year that would raise the punishment for secondary metal theft from a misdemeanor to a felony. But with copper hovering around $3 a pound, the demand for scrap metals is very much alive, and certain scrappers and scrap buyers are still willing to break the law for a price.

The Philadelphia Police’s Major Crimes Unit is assigned to work with various municipal departments to monitor illicit activity at local scrapyards, assisting in the routine inspections of the water and health departments. Three to four of the city’s several dozen salvage yards are selected at random each month for inspection. Major Crimes officers also work closely with the City’s Department of Licenses and Inspections, which takes the bulk of the responsibility issuing citations and inspecting each lot’s inventory. L&I officials declined statement for this story, but according to Major Crimes, cases of scrapyard owners being charged with the felony of purchasing stolen metals are “very rare.” 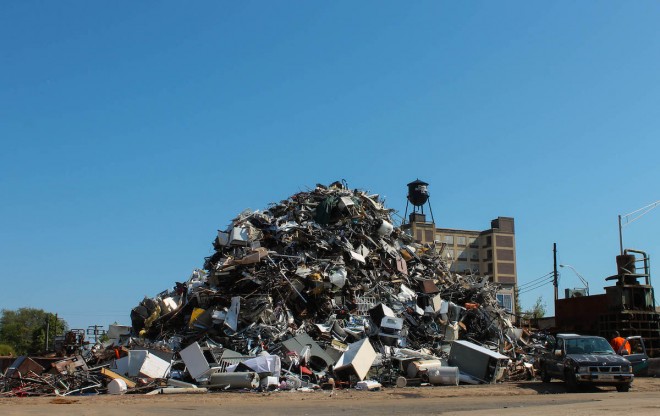 The amount of legitimate scrap metal collected, sold, and purchased far outweighs the illegal incidences. Scrap yard workers have personal relationships with many their regular sellers. If they have a concern for their reputation, they’ll be quick to tell you that despite the bad reputation, most scrappers aren’t stealing from anyone. As one such worker put it to me, “If anything, they’re cleaning up the city. You see an empty lot around your neighborhood, well, that might be full of junk metal if it wasn’t for scrappers. And you know the city won’t clean it up.”

Still, it might be hard to differentiate between the average pushcart scrapper and the type of scrapper who would uproot a thousand pounds of historic fencing with a dump truck, or who would climb one of SEPTA’s 30-foot catenary poles to cut the suspended cables, risking fatal electrocution for a few hundred dollars worth of copper. Nestel says the majority of people who steal copper from SEPTA installations are addicts. But the larger reality, as one full-time scrapper says, is that everyday people have turned to salvaging their own metal, making the real scrapper’s job much more difficult. “There are too damn many [scrappers]. You see grandmas rolling around in their Buicks looking for stuff,” he says.

Outside of Penn Treaty Metals in Fishtown, a construction crew separates their truckload of copper and iron, sawing off soldered joints in order to sell the pieces as pure metal for a higher price. According to Danny (no last name given) and his brother, who’ve been scrapping full-time with their pickup truck in Philadelphia for 26 years, you wouldn’t have seen this a few years ago.

“It used to be that construction crews would call a scrapper if they had old materials to get rid,” Danny says. “But once they realized the money of the metal, they decided just do it themselves.”

In the face of the a citywide 26 percent poverty rate, some scrappers attribute the rise in new scrappers to wage loss rather than the lack of jobs. Especially with low-income jobs, many have been forced to either take on a second job, a few odd jobs, or prowl the sidewalks before trash day, looking for the lustrous glow of something metal under the streetlight.