The Other Shoe Drops On Modernist Landmark 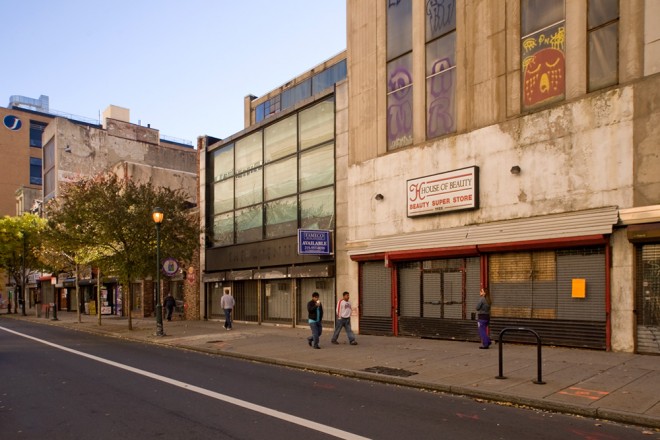 Permits are approved. Heavy equipment is in place. The demolition of the former Coward Shoe Store located at 1118-20 Chestnut Street has begun.

The building, a 1947 design by architects Oscar Stonorov and Louis I. Kahn, along with an adjacent property, will be replaced by a mixed-use development that dramatically improves, we are told, the “most visibly blighted stretch of Center City’s commercial heart.” While some may welcome the change (Stonorov and Kahn’s design was, itself, a good example of the unrelenting redevelopment of the American commercial landscape) such changes, especially along Chestnut Street, must be seen in a larger context. Both building and district are siginificant factors in determining the impact on the city’s architectural character.

When the Coward Shoe Company commissioned Stonorov and Kahn to prepare plans for a Philadelphia location in the early months of 1947, the chosen site was at the core of the city’s then-thriving commercial district. Located just a block south of the Reading Terminal, the 1100 block of Chestnut Street was lined with a wide range of small-scale boutiques and high-end specialty shops—a counterpoint to the large-scale department stores dominating Market Street.

For Stonorov & Kahn the design of a shoe store was not an unfamiliar task. The partners were known at the time for their innovative, war-related housing projects and their citizen based, city planning efforts, including a pair of influential industry sponsored pamphlets “City Planning is Your Responsibility” and “You and Your Neighborhood”. Stonorov & Kahn, like many progressive architects at the time, were attracted to campaigns launched by building material manufacturers jockeying for position in a race to capitalize on the pent-up demand for consumer goods following several years of wartime building restrictions.

One such campaign, launched by the Pittsburgh Plate Glass Company (PPG) during the summer of 1944, included designs by Stonorov and Kahn (for shoe and furniture stores), along with a “who’s-who” of modern architects: from Bauhaus founder Walter Gropius and the soon-to-be corporate giant, Skidmore, Owings & Merrill to shopping mall pioneer Victor Gruen and Morris Lapidus, creator of a series of suave, beach front hotels on Florida’s Gold Coast. PPG produced a wide range of glass products used in the automotive, aerospace and construction industries, including colored and textured glass marketed under the Herculite brand, used widely in the commercial sector. The campaign, which debuted in February 1945 under the title “There is a New Trend in Store Design,” aimed at continuing efforts to “Modernize Main Street”, providing examples of a full range of commercial establishments, including theaters, restaurants, service stations, auto sales rooms, beauty shops and, of course, shoe stores. All told, 41 designs were presented by 22 designers, each offering their “ideas of what post war store design would be like.”

Figure 2 | Courtesy, Louis I. Kahn collection, Architectural Archives of the University of Pennsylvania

Stonorov and Kahn’s submission juxtaposed a free-floating display case—complete with plastic shoe trees and sculptural sign—against a restrained use of large sheets of Herculite glass [fig. 2]. The “extensive though rational use of glass in the store entrance,” wrote the designers, “gives a measure of objectivity that invites potential customers to concentrate their attention on the sales articles rather than on extraneous display.” Emphasis, therefore, was on the shoes and not, as some of their contemporaries would favor, on attention-getting architectural devices. For Stonorov and Kahn, clean lines, fine proportions, and a keen material sensibility in architectural expression punctuated the message that “shoes are quality merchandise,” with their “detailed craftsmanship,” best revealed through a restrained approach to design. In essence, “modern without tricks.”

Stonorov and Kahn’s PPG design work resulted in two commissions for local shoe stores: the Thom McAn Store at 72 South 69th Street in Upper Darby, a work of 1945-46 (most likely unbuilt), and the Coward Shoe Store which opened in January 1949. Despite the fact that the Stonorov-Kahn partnership ended in March of 1947—just a few months after the Coward commission was received (with Stonorov taking charge thereafter)—Anne Griswold Tyng, an important collaborator of Kahn’s recalled in a 2010 interview his participation in the initial design development. Records held in the Louis I. Kahn Collection at Penn’s Architectural Archives include a number of congratulatory letters in addition to an invitation and correspondence related to the store opening. While the full scope of Kahn’s participation remains unknown, the Coward Shoe Store is one of only a handful of commercial works Kahn is known to have worked on and the only surviving example [fig. 3]. 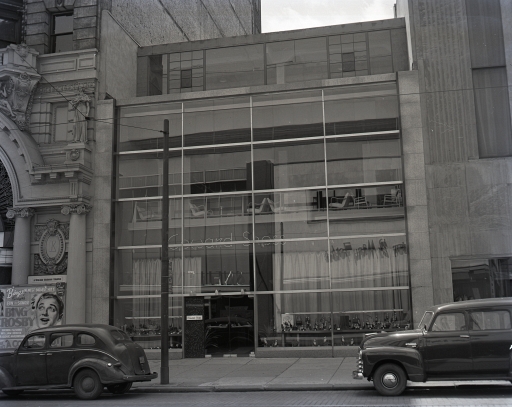 As built, the dramatic, glass-fronted façade revealed the organization of the two sales floors within: men’s, children’s and accessories occupied the ground floor with the women’s department above. Specially-designed showcases, first seen behind the glass of the façade, lined the way in, and screened the men’s fitting area from initial view. The emphasis placed by the architects on the quality and craft of the merchandise, via case display, was further accented by the design of the staircase; it’s structural glass parapet drew into view the up and down parade of the female clientele—seen to best advantage from (as if it was out of an episode of Mad Men) the men’s fitting area [fig. 5]. If visual interests were dominant, Stonorov and Kahn did not overlook the subtle influence of touch, here expressed in the “sinuous teak-wood door pulls” of the main entrance and the bent-wood arm chairs—knock-offs of the Alvar Aalto furniture designs admired by the partners since the late 1930s [fig. 6]. 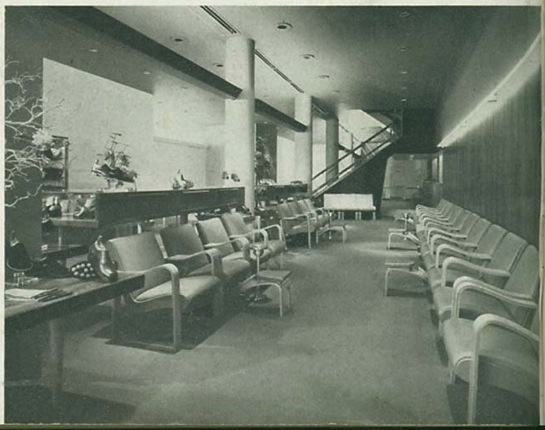 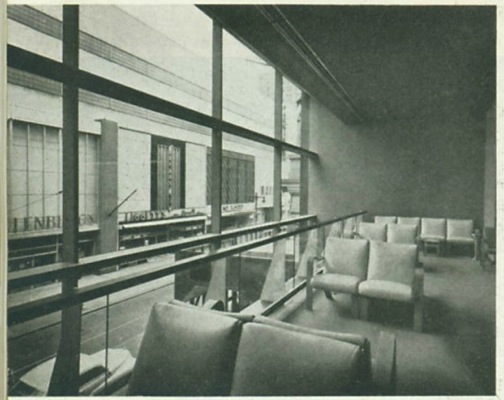 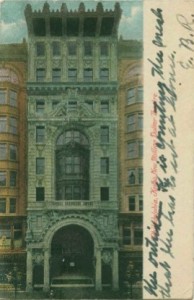 Hidden behind the façade of the Stonorov and Kahn design are the remnants of an earlier commercial development, dating from 1902. A late work in the French Renaissance style designed by Bruce Price, an architect best remembered today for his shingle-clad houses of the 1880s (considered an important influence on a young Frank Lloyd Wright), the development comprised a pair of seven-story office blocks flanking an ornate, theater front known first as Keith’s Chestnut Street Theater and, later, as the Randolph [fig. 7].

Stonorov and Kahn pared down the western wing and made use of the existing floors and columns of Price’s original for economic reasons (architect Solomon Kaplan performed a similar operation a decade before on the development’s eastern wing, located at 1112-14 Chestnut). The architects may have also been interested in the potential contrasts of old and new—a characteristic typical of Stonorov’s residential works of the late 1930s which added dramatically modern wings—using sympathetic materials—to old Quaker farmhouses.

The disciplined flatness of the Chestnut Street façade, with its restrained design and open façade composed of large glass panels not only signaled the arrival of post-war Modernism—here the Coward Shoe Store must be counted among the earliest examples in Center City—but also a change in attitude toward the design of retail spaces that would have dominate the years that followed. When compared to the surrounding works, the Coward store must have come as a revelation to the mercantile community for when they chose the design for their Mercantile Library it looked remarkably like the Stonorov & Kahn design [fig. 8]. Even ten years on, the effect was still apparent [fig. 9]. 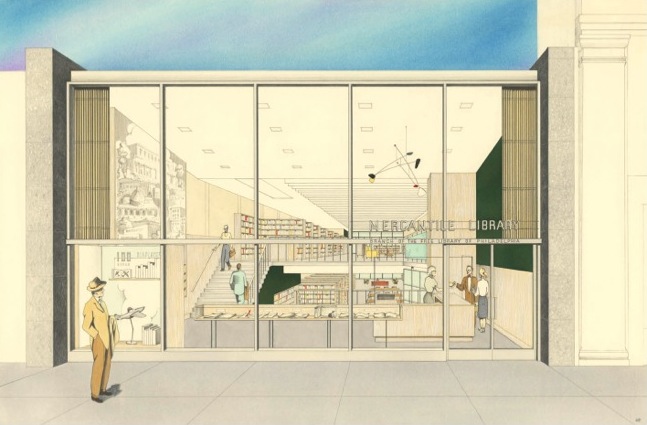 Figure 8 | Courtesy, Architectural Archives of the University of Pennsylania 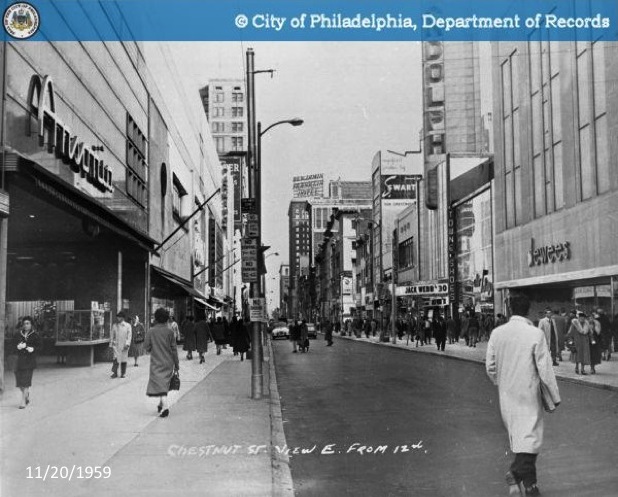 Figure 9 | Courtesy, PhillyHistory.org, a project of the Philadelphia Department of Records

That all began to change with the shift to the suburbs. “Stores always follow the crowd,” noted architect Morris Ketchum, and there was little in his mind that could be done to stem the tide of decentralization; no gimmicks; no “mousetrap philosophy to retailing” to challenge the inevitable restructuring of the commercial marketplace that accompanied the suburbanization of American residential life. At this point the fate of the Coward Shoe Store, by the mid-1950s known as Towne Shoes, was likely sealed.

Over time, that shift took its toll. Retailers first refocused their attention to places like City Avenue—touted as the “Golden Mile” (which somehow still manages to hold onto a Lord and Taylor as well as a Sax Fifth Avenue), and then on to King of Prussia, Cherry Hill and eventually Exton. Back on Chestnut Street, established tenants departed, their signs were removed (often integrated elements significant to the character of their modernist designs), interiors “renovated,” and the customer base shifted from the well healed to the down trodden; the Chestnut Street transit way only exacerbated these problems. Frankly, a sign of just how bad the situation along Chestnut street had become is that the building lasted this long.

The Cycle Of Redevelopment 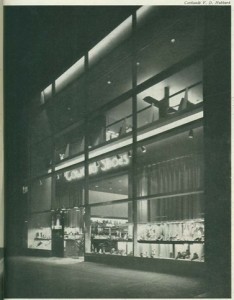 Clearly, the area is now on the upswing and possibilities that seemed distant just a few years ago are now within reach. In spite of these positive developments, the reuse or preservation of former Coward store was never pursued or even considered. It deserved better [fig. 10]. Better recognition as an exceptional work of architecture with ties to two internationally significant architects; better recognition as an early (if not the first) example of postwar Modernism on Chestnut Street and further, as the last surviving example of commercial architecture that Kahn is associated with. The fact is that too few saw it for what it was.

Such is the nature of change in the commercial marketplace: change is relentless, driven by considerations largely outside architecture, and at a pace out of sync with current preservation practice. The latter, sadly, hampered by persistent biases against seeing the recent past as a significant contribution to the cultural heritage of the Philadelphia region.

The loss of Philadelphia’s modern heritage continues unabated. Fewer than ten sites are listed on the City’s Historical Register, and even that does not seem to prevent radical change. What replaces these architectural gems are often mediocre, neo-modernist flops. Worse yet, these replacements are increasingly out of scale with their surroundings. And, therein, lay a bigger problem.

While we are losing a shoe store—all be it a long-closed one, we are also losing a piece of Chestnut Street’s urbanity, and that matters a great deal. Usually, what makes a neighborhood urbane, to quote Robert Venturi, “is lots of many things which are very different which are close together.” As of today, this certainly remains true of Chestnut Street. Chestnut’s constant is the contrast of old buildings with very new buildings and the variety of uses found along its sidewalk-friendly length. The close proximities, the interlacing of architectural styles and scales—grand and small, Queen Anne to Moderne, are ingredients that, for now make Chestnut Street a model of Philadelphia’s genteel urbanity.

While there may be nothing that can be done to prevent the loss of the Coward Shoe Store, the loss of that particular quality of urbanity that is Philadelphia should not go unnoticed or unchallenged.