The Many Lives Of The Wayfarer’s Lodge 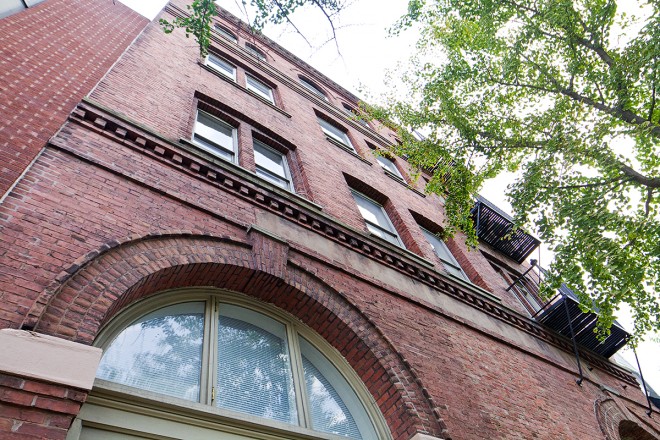 This fine building at 1720 Lombard Street looks like the type of apartment building you’d expect to find where Rittenhouse Square, Graduate Hospital, South Philly and South Broad Street mesh together to form one of Philadelphia’s loveliest neighborhoods. Yet the structure that now houses these gracious residences started out as a place for the homeless to spend the night, and later was used to produce treatments for syphilis.

The story of this building begins in the late-19th Century, when prominent citizens of many American cities began to take an interest in solving a problem they all struggled with: homelessness. The Society for Organizing Charity (SOC) formed in response to a sudden spike in vagrancy nationwide that resulted from the Panic of 1873, America’s worst economic downturn until the Great Depression. The SOC’s Philadelphia chapter organized in 1878.

The Philadelphia chapter’s first effort to aid the homeless came in the formation of a Labor Exchange where homeless and/or unemployed men could explore a job fair to find work. Unfortunately, this first attempt failed. The Society found that the men in need of work refused actual labor when a handout was available. Subsequently, the SOC determined an in-house workspace provided a stronger outlet, and the homeless would need to pass a “labor test” in order to receive aid. 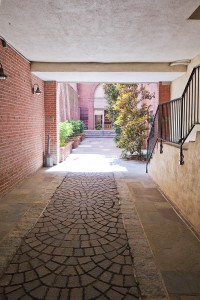 Looking into the courtyard at Beekman Place | Photo: Peter Woodall

In 1881, the Philadelphia SOC’s four district offices pooled their resources and leased an old wood and coal depository at 1720-22 Lombard Street and named it the Wayfarer’s Lodge. Men were employed sawing and splitting wood which was later sold to those interested in low-cost lumber. The Lodge’s “labor test” successfully separated who the Society deemed “industrious men out of employment” from the “lazy beggars.” Those industrious men worked no more than four hours a day so they could spend the rest of their time trying to find permanent employment. After three days, they were expected to either leave or apply for an extension of their stay.

The Wayfarer’s Lodge’s success gained quick acclaim, causing Wayfarer’s Lodges to open in other cities following the three-day labor test model. This spurred more donations from the Philadelphia’s philanthropic community and by 1884 allowed the Lodge to expand, adding a lodging house across the street, women’s quarters, and a second Wayfarer’s Lodge (called the “Northern Lodge”) at 80 Laurel Street. Their work expanded to include box making and separation of different grades of firewood. The Lodge also contributed to a notable reduction of homeless on the streets; several police stations shut down their “tramp rooms”, where homeless slept before the emergence of shelters, and farmers and contractors from across the region started coming to the Lodge looking for workers.

After a fire at the Lodge in 1892 and another spike in homelessness as a result of the Panic of ’93, the Society made a goal of purchasing the Lombard Street property and erecting a large and commodious building to serve as both a shelter and employment center. This of course required much planning and fundraising. Not only would 1720-22 Lombard have to be purchased, but for best use, they needed to buy the adjacent properties on Naudain Street. The state legislature formally recognized the Philadelphia SOC too—going so far as to give the Lodge superintendent the power to arrest men who refused their woodyard duties after receiving care. 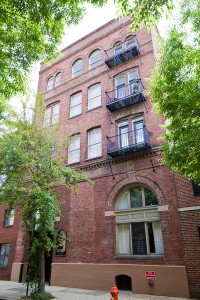 In 1900, with all that preparation complete, the Society still fell short of the funding goal needed for construction of their new facility, despite a sizable donation from their own board of directors and the Lodge’s woodyard making a profit for the first time. Finally, at the start of 1901, a gentlewoman who demanded to remain anonymous donated the final $10,000 required, bringing the building fund up to $53,000.

They commissioned the architecture firm of Duhring, Okie, & Zeigler for a design, and construction began in September 1901. The new building increased the Wayfarer’s Lodge bed count from 60 to 208, an increase that also included the change from bunk beds to singles. Its fireproof construction included superior bathing and disinfecting facilities, high ceilings, and modern ventilation. The first floor featured an assembly room and reading room. The basement held stables, the tool room, wood storage, and a smoking room (so much for that fireproofing). The second floor held the men’s dormitories, bathing areas, and stations for washing clothes. The third floor held the dining room, kitchen, store room, and additional dormitory space. The fourth floor was almost completely isolated from the rest of the building—because an exclusive dormitory for 18 women was located there, where the Society employed them to handle laundry detail. The structure appears thin from Lombard Street, only 36 feet wide, but has an astonishing girth of 94 feet on Naudain Street.

On May 28th, 1902, the completed building opened with a dedication celebration attended by over 400 people. The famous social reformer Jacob Riis gave the opening address and the Society used the occasion to announce their new partnership with the University of Pennsylvania, who offered a sociology fellowship to a young Benjamin C. Marsh to assist his research of homeless men. His studies the following year enabled the SOC to streamline their operations and offer better incentives to make use of the Lodge. Even with a new and beautiful facility, the Lodge had a hard time filling even half of the beds. Marsh determined that a homeless man in Philadelphia in 1902 made an average of $1.15 a day begging in the street (Marsh himself dressed as a vagrant and tried it for a day) and that each one only needed 5 cents for a night’s stay at a flophouse, making the Wayfarer’s Lodge not worth the effort of the labor test. On top of that, there were by this point many more religious organizations and lodging houses without obligation that offered nightly meals and beds for free.

Wayfarer’s Lodges in other cities faced the same problems and started to close one by one. Undeterred, the new Philadelphia lodge continued under the same three-day labor test plan. In 1904, the Northern Wayfarer’s Lodge also expanded, moving to a much larger facility at 1428 North Sixth Street (long gone) and was renamed Lodge #2 (the Lombard location became Lodge #1). Despite the perceived growth, the two Lodges were handling 10% less volume than they were as small woodyards a decade earlier. The decline continued until the Wayfarer’s Lodge #1 was forced to close at the end of 1919.

In 1920, the building became the Dermatological Institute of Abbott Laboratories, Inc. Here, scientists engaged in research related to skin and skin diseases. Arsphenomine and neoarsphenomine, arsenic-based compounds used to treat syphilis, were produced and stored here. By the time the facility closed in the 1940s, they had acquired and destroyed for parking some adjoining houses on Naudain Street along with Tagan’s Place, May Place, and Hammel’s Place, three interstitial alleys to the east and west of the building.

In the 1950s, the old Wayfarer’s Lodge #1 came under the ownership of the Lentzman family, who leased the building to a number of different concerns. The Carver Vocational School, Perimod Casket Company, a candy manufacturer, a print shop, and auto body shop shared the building at once. They all moved out by 1962, the vocational school the last to leave.

By this point, the building was falling apart and becoming a blight to the neighborhood. It was purchased by an L.F. Greenberg, who worked with the Donald Kline Company in the mid 1960s to turn the building into a residence. The original plan was to create 40 apartments including an addition of a sixth floor to the entire building. After getting rejected by the Zoning Board of Adjustment, they opted to make it 33 apartments with seven medical research offices managed by the Children’s Hospital of Philadelphia and a sixth floor addition on only the Naudain Street side. Over the next decade, the building changed ownership several times, and the offices converted to apartments in 1974.

On September 13, 1976, the current owner, Albert Shapiro of Narberth-based Savoy Properties purchased the building for $473,475 and overhauled what he saw as a shoddy conversion, replacing most of what had been just installed a decade earlier. Savoy has owned and managed the property ever since, calling it Beekman Place (presumably after the small neighborhood in Lower Manhattan).

Today, the former Wayfarer’s Lodge #1 lives on—as a home for many young singles and families.