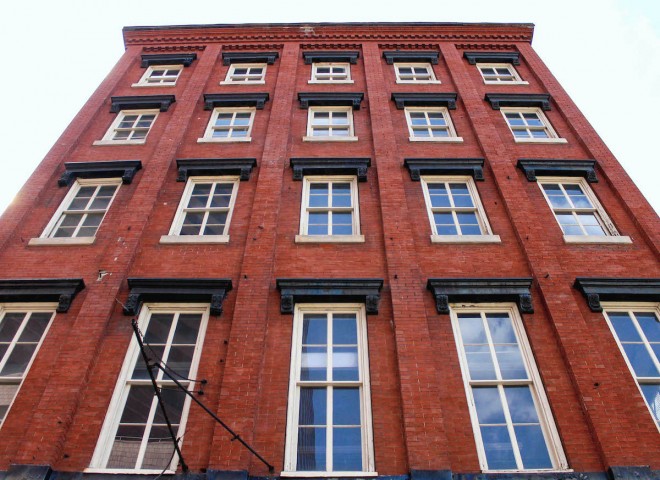 The story of the restrained five story Italianate mercantile building at 30-32 South Seventh Street–vacant now for eight years–begins with two men, William N. Lacey and Samuel R. Phillips. The early industrialists partnered up in 1845 to manufacture saddles and harnesses at a small shop at 12 South Fifth Street as the Lacey & Phillips Saddle and Harness Company. In 1851, they entered their finest harness into competition at the Great Exhibition of the Works of Industry of All Nations in London, the first World’s Fair. In a huge upset, the harness was awarded the Gold Medal and was the first award from the exhibition leaked to the press. Every newspaper in the United States celebrated the success. Prince Albert, upset not only about the American victory but because it was prematurely publicized, forced the Queen of Spain, who had purchased the harness, to pay a duty equaling $1,900 out of spite. 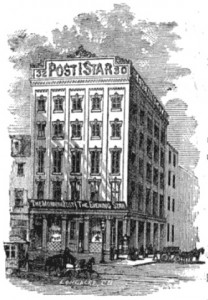 An 1870 rendering by the Longacre Lithography Company, which was headquartered in the same building. | Pettengill’s Newspaper Directory

The victory at that World’s Fair led to an exponential growth of business for Lacey & Phillips over the next few years, compounded by another Gold Medal in 1853 at the Exhibition of the Industry of All Nations in New York. Considered the finest horse equipment makers in not only Philadelphia but the world, by 1857 the company was able to purchased a pair of old houses at what was then the southwest corner of Seventh and Jayne Streets for the construction of a new five-story store and factory. By 1858, the building was complete and the Lacey & Phillips company was able to expand their operation to include the sale of horse covers, lap blankets, afghans, dress covers, whips, bits, spurs, singeing lamps, chamois skins, clipping combs, and shears. William N. Lacey died the same year and around 1860 Phillips changed the company’s name to Samuel R. Phillips Saddles and Harnesses. When the Civil War began, the Union Army ordered thousands of saddles, harnesses, and other horse-riding equipment from the company.

For a while, however, the explosion of war related business ended up hurting the S.R. Phillips Company. In May, 1862, Phillips got in a bit of trouble, accused of not filling a military order for 2,500 sets of horse-riding equipment. The order was originally made by General John C. Fremont, a regular customer of Phillips before the war. Known for his autocratic style and circumvention of authority, he put the order in without an official approval from the Secretary of War. Phillips subsequently put in orders with all his parts suppliers across the nation. During the time the parts were being manufactured, General Fremont was relieved of duty by President Lincoln for insubordination. Phillips assumed that Fremont’s order was null and void, so he didn’t fill it. The federal government, however, was aware of the order and still expected those 2,500 sets. When Phillips didn’t deliver, he was called before the Commission of Ordinance and Ordinance Stores and was interrogated about the matter. Though he was cleared of wrongdoing, his parts suppliers were left in the lurch, each now overstocked with 2,500 extra parts. This irreparably hurt the reputation of the S.R. Phillips Company and caused a decline in business that led to a move to a much smaller space on the 100 block of South 13th Street in 1868. Despite this setback, Samuel R. Phillips continued to win awards for the quality of his horse equipment and died a millionaire in 1880. 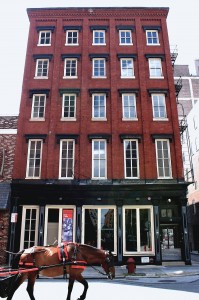 By the time Phillips moved to 13th Street, the area around South Seventh Street had become a newspaper and publishing district. In May of 1868, two fledgling “penny papers” moved into the building: a the 6-month-old publication called the Philadelphia Morning Post and the two-year-old Evening Star. The Longacre Lithographic Company also used part of the building. The Morning Post, started by John D. Stockton and John Russell Young, had a brief and tumultuous stint at this building, where they published controversial editorials condemning abuses by the city’s Highway Department, exposing abortion doctors, and advocating for the rights of African Americans. Though somewhat well-read, the paper was unable to keep itself financially solvent and was absorbed by the Philadelphia Post by the end of 1870.

The Evening Star (not to be confused with the Philadelphia Evening Star), an independent paper known for a much more gentle approach to journalism, had the highest daily circulation in Philadelphia at the time. This was mostly due to their Bullock Press, capable of printing 400 copies per minute. When the Morning Post failed, the Evening Star moved into most of its space and installed a giant sign declaring the paper’s name on the northeast corner of the façade. For the next three decades, 30-32 South Seventh Street would become known as the Evening Star Building. 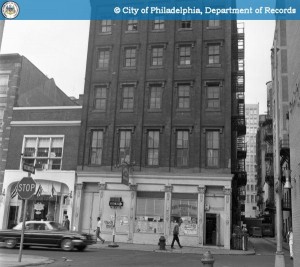 The paper continued on until 1900, when both the Quaker Knitting Mills and the Edward S. Paret Lithography Company took over the building. During the next couple of decades, many concerns would come and go, most of them apparel or publishing related. For the rest of the 20th Century, the building housed wholesalers. Jacob Buckman’s Philadelphia Lighting Fixture Company would occupy the address for decades. After that, local entrepreneur Howard Voluck took ownership of the building for his Wholesale Distributors Inc. store and warehouse.

From 2004-2008, the last business to occupy part of the property, Liberty Boards, sold skiing, skating, and surfing equipment and apparel out of the street level storefront. In September 2008, entrepreneur and restaurateur Edward W. Bianchini purchased the building for $1.55 million and later applied for a permit to completely overhaul the space and turn it residential with eight apartments and a restaurant on the first floor. No such conversion was completed and the building has remained vacant since then, save for the storefront windows, which were decorated with posters and information anticipating the renovation and re-opening of the Philadelphia History Museum across the street. The old Lacey & Phillips Building again went up for sale in August, 2013.

On May 30th, 2014, a new owner simply named 7th Street Investors, LP (which traces back to a married couple from Devon, PA), purchased the space for $1.475 million.