Life Anew For The Living Collections At The Barnes 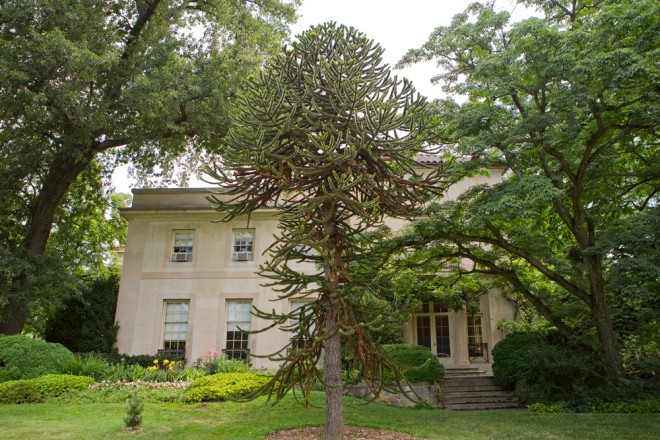 When the Barnes Foundation formally announced its relocation to the Ben Franklin Parkway, it brought the promise of greater access to the art that made the Barnes famous the world over—half of which fame came from the difficulty in viewing it so far out from Center City and with strictly timed tickets. Such a seemingly sensible move of course required the very public violation of Albert Barnes’ will, a long drawn out legal battle over it, and defense against a damning (if one-sided) documentary film about the entire affair. Largely lost in the shuffle was the fate of the original location in Merion, particularly the landscaped, 12-acre grounds surrounding the gallery building. But with a trial run of public hours this summer (10am–4pm Friday–Sunday), the Barnes Arboretum has reopened its doors—or rather, its garden gates—restoring a crucial part of the Foundation’s original mission.

In December 1922, the Commonwealth of Pennsylvania awarded the Barnes Foundation a charter “as an educational institution, established to ‘promote the advancement of education and the appreciation of the fine arts’ and ‘for the study and for the encouragement of arboriculture and forestry’,” according to the brochure for the Barnes Arboretum School, founded in 1940—by Albert Barnes’ wife, Laura.

A young Laura Leggett, prior to her marriage to Albert Barnes | Photo courtesy of the Barnes Arboretum

Laura Barnes, née Laura Leggett, developed all the zeal for horticulture that her husband did for art. In a way, it had everything to do with being in the right place at the right place and the wrong time. Their home and Foundation on Latch’s Lane—just up the street from Lauraston, their previous home named for her on Latch’s Lane—came ready-made as an arboretum. And as the years passed and her husband cozied up to Violette de Mazia, his muse and companion on many an art purchasing trip (including those with his wife), Laura Barnes spent her time deliberately away from the art galleries and out in the arboretum and gardens, doing for them and their potential for education what her husband was doing with the art inside.

Prior to Paul Philippe Cret’s famous building to house Barnes’ art galleries, the estate at 300 North Latch’s Lane in Merion was the site of Red Slates, built by Civil War veteran Joseph Lapsley Wilson. After the war, Wilson became secretary of the Little Schuylkill Navigation Railroad and Coal Company (effectively a wing of the Reading Railroad which transported anthracite coal) and by 1880 had made enough money to purchase several acres on Latch’s Lane, one block north of City Line Avenue.

Inspired by the exotic plants he saw at the Centennial Exposition in 1876, Wilson began buying unusual and rare plants. He’d planted over 200 trees on the grounds by 1922, when Albert Barnes finally convinced him to sell the estate. Wilson only did so when Barnes agreed to preserve and care for the arboretum—and keep Wilson on as its director. In Barnes’ demolition of Red Slates, he made sure its successor, Cret’s gallery building, was set back to maintain the placement of two Franklinia trees Wilson had planted. The two there now are younger trees, but a number of Wilson’s original plantings still survive, including a picturesque European cutleaf beech, an enormous honey locust, and a stand of trees closest to Latch’s Lane. Barnes also built a new home for Wilson: the Lapsley House, which eventually became home of the Arboretum School, on what is now Lapsley Lane directly behind the Arboretum’s greenhouse. 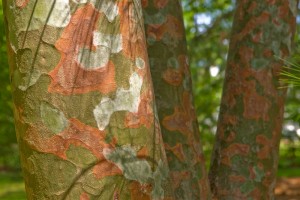 Natural woodland camo: Laura Barnes loved textured barks like those of the Stewartia and this Lacebark Pine | Photo: Bradley Maule

After Wilson’s death in 1928, Laura Barnes became director of the Arboretum. In that role, she continued to purchase rare and exotic plants and trees, organizing them on the grounds in groupings not unlike her husband’s ensembles inside. Her fondness for flaky barks, lilacs, peonies, and ferns is reflected in a dedicated stand or garden exhibiting each. Likewise, she had a disdain for “vulgar” plants—those which hung low with a weeping or pendulous habit—as well as for variegated foliage and yellow leaves. She only planted what she liked; other collections include a rose garden, a conifer grove, and a formal garden, all of them assembled in a manner conducive to teaching. Complementing the living collections, an extensive herbarium featuring over 10,000 specimens is housed in the Barnes’ former residence.

Among the stranger varieties on display is the monkey puzzle tree. Situated adjacent to the residence, the evergreen, planted by an elderly Laura Barnes in the 1960s, features long, thin branches of thick, stacked, pointy leaves. Native to the Chilean Andes, the monkey puzzle is somewhat popular as an ornamental tree on the west coast, but it’s rare in the Philadelphia region.

Just as every inch of every gallery developed from the persnickety vision of Albert Barnes, each corner of the 12-acre arboretum was cultivated from the curiosity of Laura Barnes. Of course with actual living specimens, constant care is required to preserve the health of the arboretum and gardens, as well as Laura Barnes’ vision for them. After her death in 1966, the role of director went to John Fogg, Penn’s Dean of the College of Arts and Sciences and a botany professor who helped Laura get the Arboretum School off the ground. Since he retired in 1979, the Barnes Arboretum has had six directors; Jacob Thomas has served in the position since 2002.

While the Barnes Arboretum is now open to the public on a walk-up basis, its school’s curriculum remains for serious inquiries only. The Arboretum School’s three-year program rewards its students with an integrated horticulture certificate, with knowledge gained from lectures and hands-on practice in the field, with equal focus on science and aesthetic.

A stroll around the Arboretum, however, is as casual as a weekend morning. The grounds are open 10am–4pm, Friday, Saturday, and Sunday through August 31st. Autumn hours remain to be determined, but there’s hope that interest and momentum will keep the Arboretum open in time for fall foliage. Tickets are $5 and parking is free; SEPTA’s Paoli/Thorndale Line stops at Merion station, a 15-minute walk to the Barnes—via the Merion Botanical Garden.

To launch a gallery of the Barnes Arboretum, click on any of the thumbnails below.