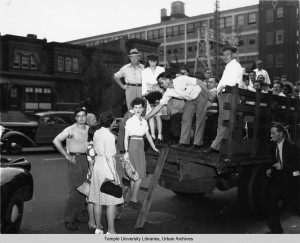 Seventy years ago, on August 1, 1944, a faction of white transit workers with the Philadelphia Transit Company (PTC) staged a wildcat strike for a nefarious reason: they didn’t want African Americans, employed by the transit company as mechanics and laborers, to be given the same high paying jobs driving the trolleys they had.

The strike effectively shut down Philadelphia, one of the key centers of defense related manufacturing, at a crucial moment in World War II. The action halted the city’s war production, as workers were unable to get to the Navy Yard and factories throughout the city. Philadelphia was the third largest producer of war materials (about one of every six dollars spent here), and the military and federal government quickly took notice. The threat of a major disruption was so severe that the Roosevelt Administration intervened, ending the strike after a week. But before it was over, the strike galvanized the progressive Transport Workers Union (TWU), in favor of integration, and ignited a protest movement for equal rights in the workplace.

The wildcat strike occurred in the context of the growing African American population in the city. According to Allan Winkler, a professor of history at Miami University of Ohio, the black population of Philadelphia grew by nearly 40,000 during the war years, lured from the South by the opportunity for better paying jobs. However, many found the job opportunities in the North lacking, as they were offered lower pay and menial positions due to their race, facing the same attitudes (if not the level of violence) they had faced in in the Southern states.

“Unemployment was very low in Philadelphia, which was one reason why African Americans were being hired to work as streetcar conductors,” says Thomas J. Sugrue, a professor history and social science at the University of Pennsylvania, in an interview for the documentary film series, “Philadelphia: The Great Experiment. “There was a need for workers of any background to fill vital jobs because of the shortage of labor caused by the deployment of men to war.”

But the striking transit workers, says historian Steven Conn, of Ohio State University, “stand out for using the power of labor unionism to reinforce a segregated economy. I can’t think of another example of that use of labor power in any other American city.”

In 1944, the PTC workers voted in a close election to change their representation from the Philadelphia Rapid Transit Employees Union (PRTEU) to the CIO-affiliated TWU. For years, the PRTEU had sustained a “gentleman’s agreement” with PTC management that kept overall wages below those of other major cities in exchange for restricting the better paying positions to white workers. By contrast, when the new TWU union representatives began negotiations with PTC management, they called not only for overall wage increases, but also to extend the better paying, public interfacing job opportunities to African American employees. The union was not alone in challenging the PTC’s discrimination policies. The NAACP and several editorial boards were also pushing to end the policy. 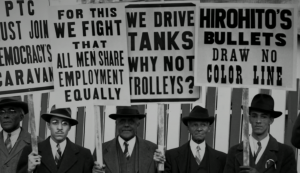 “We Drive Tanks Why Not Trolleys” | Image: “Philadelphia: The Great Experiment”

One of the key leaders of the NAACP protest was a young African American woman, Carolyn Davenport Moore, whose family had migrated from South Carolina. Moore led a protest of 7,000 people against the strike. If African Americans can fight for freedom, why can’t they enjoy it here at home, they asked. “While my mother was supporting the transit workers…Her brothers were in different theaters of the war…my uncle was in Iwo Jima. …Another uncle was a merchant marine getting torpedoed in the Atlantic group. So this is something that was very much on her mind. That they were fighting for their rights to be able to come home and be equal. Just simply be equal. And so that was an ever present kind of reality,” says Moore’s son, Richard, in a “Great Experiment” interview.

The white trolley drivers decided to strike when the PTC promoted eight African American employees to driving positions, to start on Tuesday, August 1st. A committee headed by the former president of the PRTEU Union, Frank Carney, trolley operator James Dixon, bus driver Frank Thompson, and El operator James McMenamin convinced the trolley drivers to participate in a work stoppage and that morning a large contingent of white PTC workers called out sick.

Philadelphia was not alone in white resistance to fair employment practices in the 1940s. Racist attitudes toward transit integration led to similar “hate strikes” in Mobile and Detroit, and transit systems from Boston to Portland had similar policies of racial discrimination.

President Roosevelt accused the striking white workers of violating the Smith-Connally Act (an act he had opposed), which made it illegal for workers involved in the war effort to strike, however since the PRTEU was no longer the official representative of the PTC workers, the committee representing the workers claimed they were not violating the law. 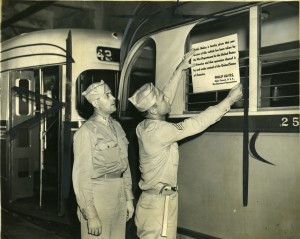 Soldiers putting sign on trolley indicating an end to the strike | Photo: Mayor’s Office of Transportation and Utilities

On the third day of the strike, Roosevelt authorized the Army to take over the transit system, and Major General Phillip Hayes threatened to conscript any workers who remained on strike. Despite this, over 6,000 of the white PTC workers voted to continue the strike. On August 5th, the President upped the ante and ordered the military to break the strike by force. Five thousand troops were ordered into the city, setting up camp in Fairmount Park. The same day, the leaders of the strike committee were arrested and charged with violating the Smith-Connally Act. After spending a night in jail, McMenamin told the workers to return to work and leave the matter to the courts. He and the other committee leaders were summarily fired when they tried to return to work themselves. The military intervention ended the strike before a week passed, and by September all 8 of the African American workers had begun their new jobs as trolley drivers. By the end of 1945, nearly 1,000 African Americans were employed as drivers with the PTC.

The integration of the PTC workforce was just one sign the growing African American population in the city was going to challenge the discriminatory status quo. The successful protest against the strike “demonstrated to black people across the city that blacks had power, that they could influence not only local policies but they could also win the support of the state, of the federal government, of the Roosevelt Administration,” says historian Eric McDuffie, of the University of Illinois, in an interview for “The Great Experiment.” “What’s important about the transit strike is that it signaled a growing power, a growing black militancy in the city that black people refused to be second-class citizens, and that would carry over into the post-war period,” he says.

Under pressure from labor and civil rights leaders, including A. Phillip Randolph, President Roosevelt issued Executive Order 8802 in 1941, creating the Fair Employment Practices Committee (FEPC), which prohibited discrimination in industries vital to the war effort. Though it was used sporadically, the Order gave legal backing to the TWU and others challenging the PTC’s discriminative policies.

Author’s note: Swarthmore College’s Global Nonviolent Action Database is a wonderful resource for strikes and other resistance actions throughout the world, and provided much of the research material for this piece.