Three Centuries Of Song In Philadelphia 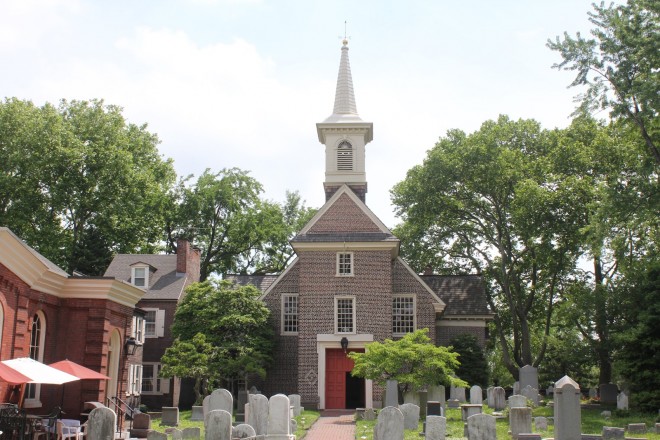 Last week while Hidden City was on summer break, an unusual bit of local trivia marked a nontraditional anniversary: the 314th anniversary of the first documented musical performance in Philadelphia. On July 2, 1700, the consecration services of Gloria Dei, popularly known as “Old Swedes’,” included music. After a couple years’ construction, the Swedish Lutheran church had been completed in the area called Wicaco, or Weccacoe, as it’s spelled on modern South Philadelphia places it’s lent its name to (Weccacoe Avenue, Weccacoe Playground, Weccacoe Flats). There almost certainly was music in Philadelphia prior to the summer of 1700, but the consecration of Old Swedes is the first documented musical performance within the current city boundaries to which we can assign a specific date and place.

Music was slow to develop in early Philadelphia due to the influence of its Quaker founders. A decidedly unmusical people, the Quakers practiced neither sacred nor secular music. With their control over so much of Philadelphia’s public life in the city’s earliest years, music was relegated to the fringes of society, where other ethnic and non-Quaker religious groups practiced it. 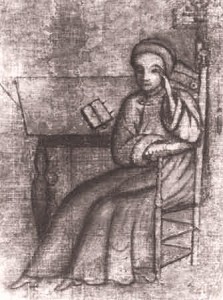 Painting of Johannes Kelpius (1667-1708), leader of Mystics of the Wissahickon, by Christopher Witt. Believed to be the earliest oil portrait in America. Original in collections of Historical Society of Pennsylvania

Justus Falckner (1672–1723), an influential German-born Lutheran minister in early Philadelphia, wrote a letter to a minister in Germany in 1701 requesting assistance in procuring an organ for Old Swedes, stating that “music would contribute much towards a good Christian service… Now as the melancholy, saturnine stingy Quaker spirit has abolished all such music, it would indeed be a novelty here.”

Swedes had been settling in the greater Philadelphia area since the late 1630s and in 1677 they established a Lutheran church at Wicaco, in a wooden fort on the site on which Old Swedes would later be built. With the singing of hymns an established part of their religious services—in 1696 the King of Sweden sent 100 hymn books to Wicaco and the other Swedish settlements along the Delaware River—it is reasonable to assume that services at the Old Swedes’ site since 1677 included music, even though they left no direct evidence of it. It took until the consecration of the new church building on July 2, 1700 for a specific mention of music to enter the historical record.

Perhaps the most unusual footnote of the Old Swedes’ consecration services and musical performances belonged to another fringe group in early Philadelphia, the Hermits, or Mystics of the Wissahickon. A German pietist sect, the Mystics arrived in Philadelphia in 1694 and settled along the Wissahickon Creek near Germantown to await the end of the world, which they believed was imminent. An unusual, insular group, they studied astronomy, botany, and the occult, and developed a fairly sophisticated musical practice for the time, using a variety of instruments they brought with them from Europe. The Historical Society of Pennsylvania holds several important items relating to the Mystics, including a handwritten hymn book with musical notation, believed to be the first musical manuscript in America, and a painting by Christopher Witt of their leader Johannes Kelpius, believed to be the first oil portrait in America. 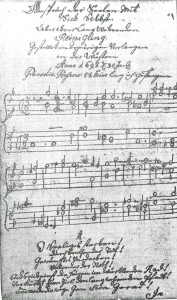 Page from 1708 hymn book of Mystics of the Wissahickon, believed to be the first music manuscript in America. Original in collections of Historical Society of Pennsylvania.

The Wissahickon Mystics again provided the music at Old Swedes on November 24, 1703, when Justus Falckner was ordained there, the first Lutheran ordination service in the New World. The ceremony featured a rather elaborate musical service with vocal selections and instrumental performances on organ—one of the first documented uses of an organ in a church in America—along with instruments such as viol, oboe, trumpets, and drums. Such a varied instrumental ensemble was most unique for early eighteenth-century America.

As the 18th Century progressed, Quaker influence in Philadelphia diminished and a lively musical culture began to emerge. In January 1757, Philadelphia saw its first public concert as well as its first opera performance. By the early 1770s Philadelphia had become the musical capital of America, a position it would hold into the early 19th Century.

While it would take almost a century—from the 1670s to the 1770s—Philadelphia’s musical landscape would go from barren to flourishing in this period, laying the foundation for one of the world’s great urban musical traditions.