Starting The Second Life Of A Manayunk Icon 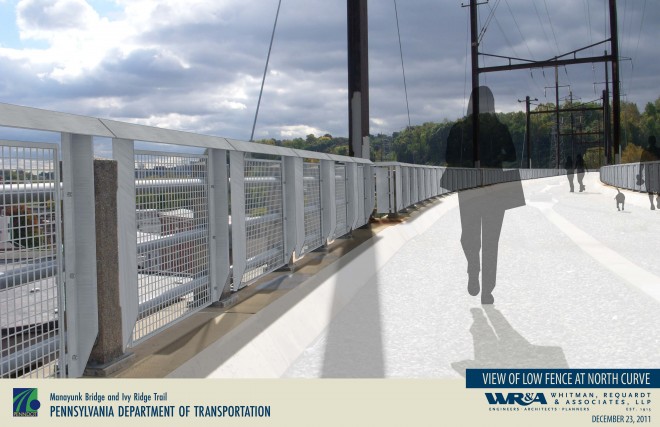 Without so much as an opening whistle, contractors showed up on Monday for Day One* of the job that will reactivate a regional landmark for the first time in 30 years when it opens in 2016. SEPTA closed the Manayunk Bridge in 1986 out of safety concerns and low ridership on its Ivy Ridge regional rail line, which since then has terminated in Cynwyd, still its lowest ridden line. Now, after years of planning, the bridge is ready to reemerge as the centerpiece of the region’s trail network, bringing Lower Merion Township and Manayunk—and more specifically, the Cynwyd Heritage Trail and Ivy Ridge Trail—together.

Ed. Note: the Philadelphia Streets Department, who is coordinating the project, informed workers that the Notice to Proceed was officially this past Monday, and that actual construction will begin within a few weeks. 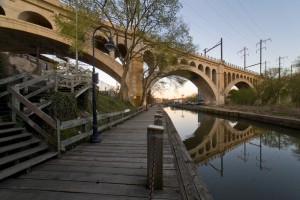 The trail down here will eventually connect to the trail up there | Photo: Bradley Maule

Blackwood, New Jersey’s A.P. Construction leads the $4.2 million project, paid for by an assortment of funds, including PennDOT’s Pennsylvania Community Transportation Initiative ($1.3 million) and Surface Transportation Program ($1.1 million), $500,000 from the Pennsylvania DCNR Community Conservation Partnerships Program Grant, which Lower Merion Township spearheaded, $250,000 from the township’s capital funds, and additional sources. Lower Merion’s participation is crucial, of course, as they initiated the successful Cynwyd Heritage Trail, and a new trail across the Manayunk Bridge will provide access to the Schuylkill River Trail system as well as an alternate route to Main Street restaurants and bars.

Like so many of the bridges across the Schuylkill, the Manayunk Bridge is incredibly complex. As it curves across the river, it also spans the SEPTA Manayunk/Norristown regional rail line, Green Lane, Main Street, the Schuylkill Canal and Tow Path, Venice Island, the river itself, the Schuylkill Expressway, and the Norfolk Southern railroad tracks, east to west. On top of that, the catenaries overhead carry live wires owned by Amtrak and PECO. SEPTA will continue to own the bridge and will lease its surface to Philadelphia Parks & Recreation, who will administer the trail upon its opening, and Lower Merion Township, who’ll maintain the western side of the bridge. At the bridge’s centerpoint, a line will be painted marking the border of Philadelphia and Montgomery Counties directly above the river.

The bridge measures just under a half-mile from end to end, 30′ wide, with nine open-spandrel, reinforced concrete arches flanked on either end by steel plate girder sections over the railroad tracks on both sides of the river. In bringing the bridge up to modern standards, new fencing will be installed on top of the guard rails already there: a 4’8′ steel mesh over the Schuylkill, providing sweeping views of the river, Manayunk and the surrounding hills, a 10′ section over I-76, and a 14′ fence over the SEPTA and Norfolk Southern tracks that provide opportunity for artistic interpretation, such as string lights. 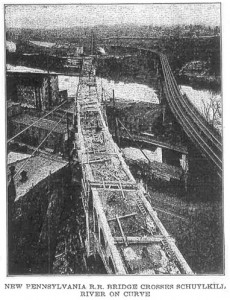 Manayunk Bridge under construction next to the previous S-bridge, demolished after the Manayunk Bridge’s completion in 1918 | Photo: Engineering News-Record, May 24, 1917

“The Schuylkill Valley Branch was built to provide the PRR a more direct routing between anthracite coal fields and the Port of Philadelphia for shipment to markets up and down the coast. The earlier structure (the so called ‘S’ Bridge) was not built to support heavier train movements which came later as coal-hopper car and locomotive size increased. It also limited speed across the bridge due to the sharp curvature on the approaches on each side.”

The new bridge, along with another across the Schuylkill at Phoenixville, allowed for heavier loads and higher speeds; it earned a feature story in the May 24, 1917 issue of Engineering News-Record as it was under construction. The PRR’s Chief Engineer Alexander C. Shand and Engineer of Bridges and Buildings H.R. Leonard designed the bridge in 1915. Philadelphian T.L. Eyre oversaw its construction.

After the demise of the Pennsylvania Railroad, Penn Central (a merger of PRR and New York Central) continued to operate freight trains over the bridge until 1976, at which time Conrail assumed freight duties from Penn Central and discontinued freight across the bridge. (Amtrak took over Penn Central’s passenger service.) SEPTA’s R6 Ivy Ridge line, now the Cynwyd Line, continued past the current terminus at Cynwyd to Barmouth Station, a popular early-20th Century spot for family outings in the West Laurel Hill and Westminster Cemeteries which the rail line bisects, and across the bridge to the Manayunk and Ivy Ridge upper stations.

The former, nicknamed the “Manayunk West” station to avoid confusion with the extant Manayunk Station which serves the Manayunk/Norristown Line, was demolished after 1986 and has served as an unauthorized parking lot for neighbors since. The site of the old station, at Dupont and High Streets, will be spruced up as a gateway plaza and entrance to the trail, eventually leading to the Ivy Ridge Trail, whose planning is underway now. That trail will follow on the former SEPTA line to where it meets up with the Schuylkill River Trail near the current Ivy Ridge Station. Until then, hikers and bikers coming east across the bridge can access the SRT via High Street to Leverington Avenue and under the trestle to the Tow Path access at Main Street.

All of it adds up to a significant benchmark in connecting The Circuit, the vision for a fully connected trail system across the Philadelphia region. It’s a huge moment for Sarah Clark Stuart, Deputy Director of the Bicycle Coalition of Greater Philadelphia and champion for The Circuit. “I’m thrilled that the Circuit is the reason why the bridge is being repurposed and re-enlivened to connect two communities that were cut off from one another by I-76 in the mid-50s,” she says. “Lower Merion Township has residents who need more places to spend their money and Manayunk needs more visitors who don’t have to come in cars. It’s also wonderful that Manayunk will have a new bicycle facility that is very different from the canal tow path and Main Street. It should attract more families and transportation bicyclists to Manayunk and will provide ‘road’ cyclists a new way to get to Manayunk (through Lower Merion Township).” 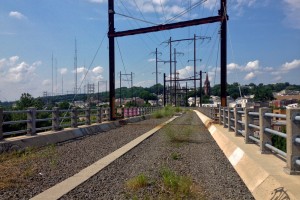 Liz Smith, SEPTA’s Manager of Long Range Planning, envisions the bridge as an attraction too. “The visibility of the project is what’s unique,” she says. “People on the Schuylkill Expressway, Main Street, regional rail, and the neighborhoods will see people biking and taking in views and want to go up there.” Prior to coming on at SEPTA last year, Smith worked for six years at the Delaware Valley Regional Planning Commission, where she worked extensively on the planning of this project with stakeholders including SEPTA, Lower Merion Township, the Manayunk Development Corporation, and others.

Kay Sykora, Executive Director of Destination Schuylkill River, a project of the Manayunk Development Corporation, looks forward to her community’s landmark ushering in a new era, too. “I’m most excited about the Manayunk Bridge highlighting The Circuit for the region,” she says. “It will be an amazing symbol that talks about the future of the trail system.”

And a symbol it is. More than “The Wall” at the Cycling Classic or the staircases leading to Roxborough above, the Manayunk Bridge serves as the riverside neighborhood’s go-to icon. Its arches are echoed in other nearby buildings including a 1920s firehouse, a 1980s bank, and a 2000s apartment building whose ground floor parking garage is masked by the same arch motif as the bridge. The bridge design is also replicated on the tap handles at Manayunk Brewpub, a mile or so down the canal at the southern end of the Tow Path. 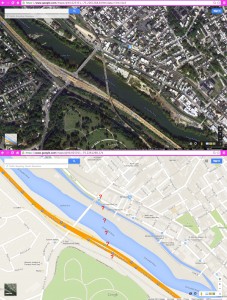 SEPTA removed the tracks from the former Ivy Ridge line in 2010 as a precursor to the trail, but has built into its lease with the City and Township that the bridge must be reverted to passenger rail use if demand calls for it. Given the Cynwyd line’s light use and the redundancy of the Ivy Ridge and Manayunk stations, that seems highly unlikely. As part of the project, SEPTA will also replace the extant ballast, polluted from 60 years’ coal rail service, with newer, light ballast that will help drain the new surface to be built on top of it.

Construction on the trail is expected to take 12-18 months, with an opening planned for late 2015-early 2016. And when it does, it will only include Phase One features. Due to budget constraints, accessory features like lighting, furniture, and landscaping will wait for a future phase. Conduits will be installed for future lighting, but the first item of business is just getting it open. Until that future phase, a gate will close the trail at dusk.

But with so visible, and handsome, a node in a greater network, demand will no doubt expedite improvements like lighting and benches for people to enjoy the views. “The Bridge itself is an elegant example of engineering and workmanship from the early 1900s that thankfully has been preserved for our generation,” says the Bicycle Coalition’s Stuart.

The bridge was most recently fully repaired by SEPTA in 1999 and it was added to the National Register of Historic Places in 2011, so chances are good that it will remain to serve future generations, too. And given plans to extend the trail out past Ivy Ridge and another to spur the Cynwyd Trail under I-76 through the O’Neill Properties (adjacent the Expressway) and back onto Main Street across the currently inactive Pencoyd Bridge, its vitality and identity to Manayunk will be preserved in the process.

To launch a gallery of the Manayunk Bridge and the views it provides, click any of the images below. Photos by Bradley Maule, renderings by PennDOT and Whitman, Requardt & Associates, historic photos via Engineering News-Record, 1917.