The 2004 film I, Robot’s obvious connection to West Philadelphia is through the film’s star, Will Smith. However, the short story collection the film is based on can also be traced to West Philly, over six decades earlier. 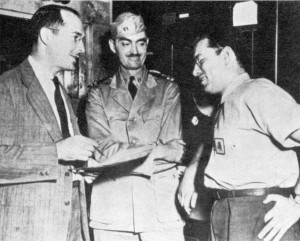 Fresh out of graduate school, Isaac Asimov had already published stories in science fiction pulps such as Amazing Stories and Astounding Science Fiction, yet in 1942, the soon to be married Asimov found himself living at home with his parents in Brooklyn, feeling the pressure to pursue a “proper” career, with the very real possibility of being drafted.  During the war, most jobs for young scientists were obtained through the government, and Asimov came to Philadelphia to work in plastic design at the Navy Yard. The South Philadelphia military base seems to have been an incubator for talented science fiction writers, with both L. Sprague de Camp and Robert A. Heinlein (Starship Troopers, Stranger in a Strange Land) working there during the war as well.

Asimov moved to Philadelphia in May, 1942, renting a room at a shared house at 4707 Sansom Street. He spent the first few weeks in town attempting to master the complex trolley system to get downtown and to work, a task he eventually gave up on, joining a car pool with his Navy Yard colleagues instead. 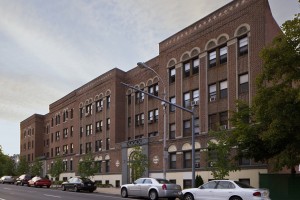 The Sansom Street house would be his first and last home away from his parents as a bachelor, and he used much of his free time going to the movies (likely at the Nixon or the Commodore), visiting the Franklin Institute and Free Library, and eating at the Horn and Hardart on Broad Street. Asimov was largely a teetotaler, a fact that quickly earned him friends at the Navy Yard, as he would give away his liquor ration card.

Asimov returned to Brooklyn on a near weekly basis to visit his family and fiancé, Gertrude Blugerman. The two married in July of 1942 at his parents’ home, after which she joined him in West Philly. The couple sublet an apartment at 4715 Walnut Street, then called Verona Court.

Vintage Signet I Robot paperback circa 1956

In his autobiography In Memory Yet Green, Asimov complained about the early hour Philadelphia shut down compared to New York, a problem that plagued him even in his own apartment on Walnut Street, where the landlord chastised the Asimovs on several occasions for walking about and listening to the radio past 11 p.m. When the sublet ended, the landlord was unwilling to give them a permanent lease, leaving the couple to search for a new home.

Gertrude found a place a few blocks away at 50th and Spruce in Wyngate Hall, a 1920s garden apartment building that would be the final Philadelphia home of the Asimov’s. They would live there until the end of the war.

At the Wyngate, Asimov worked on the early I, Robot stories including “Catch That Rabbit,” and fine-tuned the 3 Laws of Robotics which ties the stories together and also serves as the main (arguably only) thematic connection between his work and the 1999 film. He also wrote “The Wedge” and “The Big and the Little,” stories that would become part of Foundation, the first novel of the Foundation Trilogy, which is widely considered to be among the best works of science fiction. 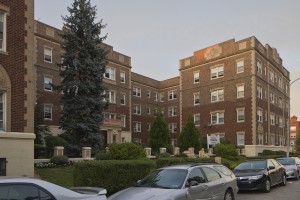 Asimov fans looking for a glimpse in the early days of the writer will be pleased to find all three of his Philadelphia homes still standing. Wyngate Hall is now called The Terrace but looks much like it did in Asimov’s day, with the original Hollywood art deco lobby, gated elevator, and embossed plaster walls still intact.

Across the street from the old West Philadelphia High School, the pre-war exterior of  Verona Court apartment complex likewise looks much as it did in Asimov’s day, though the interior has undergone extensive redesign. Around the corner, 4707 Sansom still stands among a block of rowhomes. Aside from their living quarters, the Asimov’s often dined at the Brierhusrt, a hotel on the 4500 block of Walnut which has since been torn down. 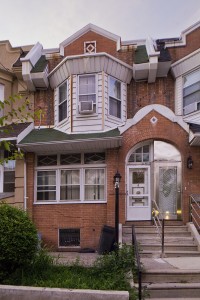 At the end of the war, the Asimov’s returned to Brooklyn, shortly after which Isaac was drafted and served a short stint in Hawaii before being discharged.  After completing his Ph.D at Columbia, Asimov joined the faculty of Boston University, and went on to publish works in 9 of the 10 major Dewey Decimal classifications.

Last year, several Philly-area Asimov fans gathered in Barkan Park across the street from the former Wyngate for a rally in support of a Pennsylvania Historical Marker to commemorate the author’s time there. As of now, the marker’s status remains in limbo. A change.org petition supporting a marker garnered nearly 4,000 signatures, but according to Karen Galle of the Historical and Museum Commission, no formal application for a marker has been submitted.