There are few sights quite as thrilling as walking down a familiar street and finding an unsuspected fragment of the city’s past that’s been uncovered in the course of a construction project. The former lives of these buildings are revealed during these oftentimes brief intervals, through a marble tablet that had been shrouded in stucco, a Hebrew inscription hidden beneath a sign or a cast iron facade concealed by a plywood storefront. Yet the discoveries are frequently bittersweet, for these older layers are usually concealed once again or demolished outright. We’ve devoted entire posts to this phenomenon in the past, but a number of small instances have accumulated over the past few years. Here are six favorites: 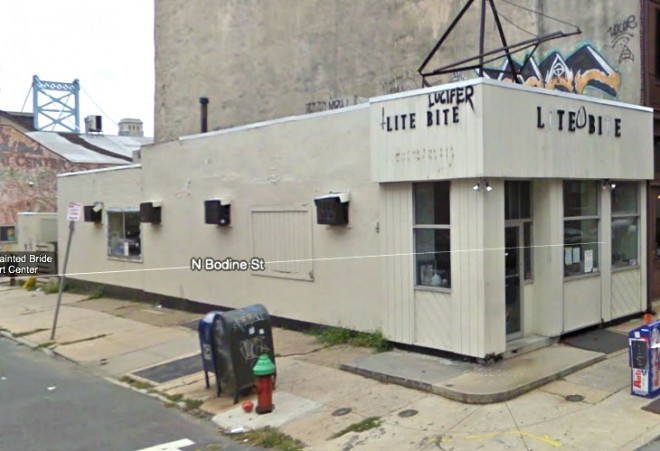 On the southeast corner of 3rd and Vine stood a little luncheonette called the Lite Bite, an anomalous one-story box on a block of handsome commercial buildings from the 1850s. Here it is in 2011: 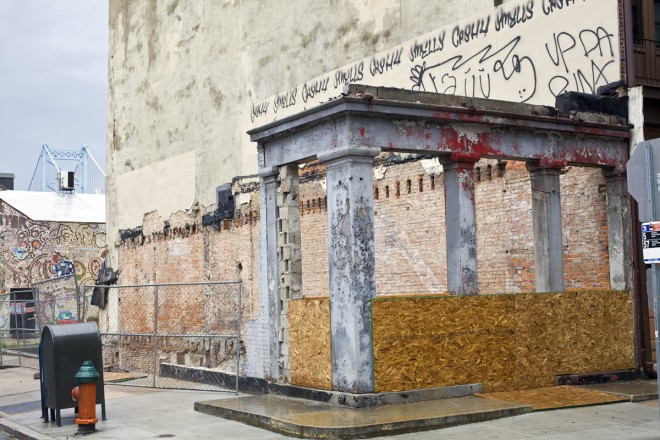 These cast-iron columns were hiding underneath the Lite-Bite’s plywood exterior | Photo: Peter Woodall

There wasn’t much cute about the place except for the name, and it sat vacant for several years after closing around 2008. Demolition finally began in 2012 and there, underneath the wood facade, were cast iron columns that matched those on the rest of the block. For months, the columns stood alone, like some miniature, New World version of the ancient Roman ruins on Palatine Hill. 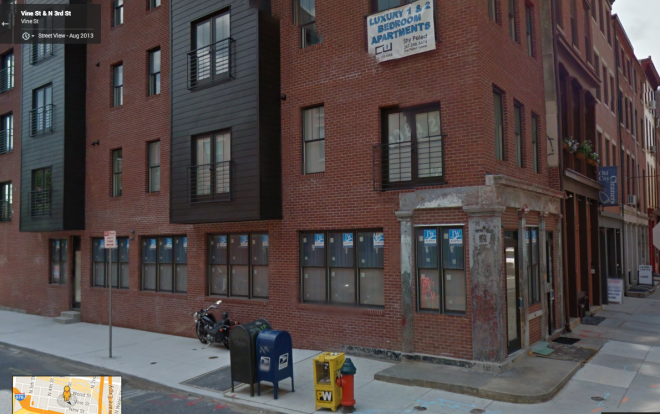 The southeast corner of 3rd and Vine | Source: Google Streetview

And then the developer did something all-too-rare: he incorporated what he’d found in the new building. Unfortunately, a few critical details got lost between the appealing rendering and the actual bricks and mortar, namely the lintels over the windows. The graceful transition between old and new features was also misplaced, but even so, the critical thing is that that the columns still exist, waiting for the next developer to do a better job. 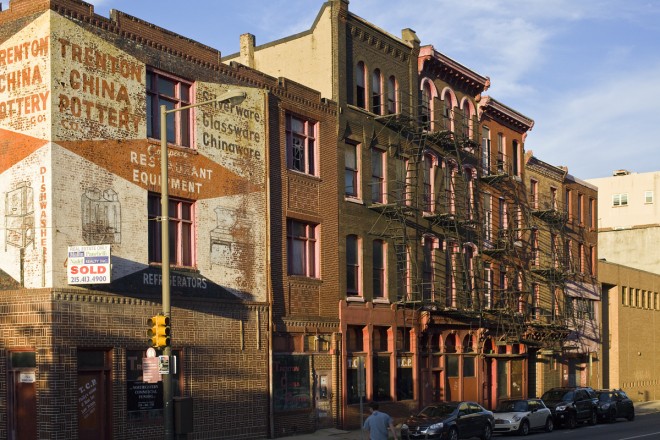 The Trenton China & Pottery buildings, with their fire escapes on the front facade, were like a little slice of New York’s Lower East Side transplanted into Old City. Yet attaching a bulky metal contraption to the front of a building is pretty awful thing to do, nostalgic geographical associations aside, and along with decades of grime, made it tough to envision what might ben underneath there. 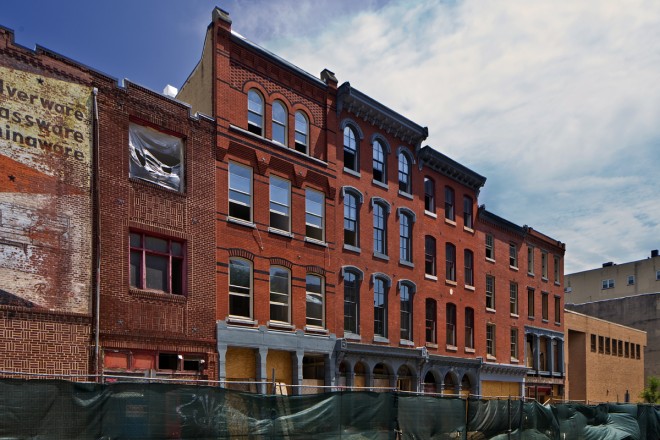 What emerged from beneath the dirt and metal and paint was a luminous red brick, and on 135 Arch, sharply contrasting black brick accents. Taken together, it is a tremendously handsome group of buildings.

Here’s what the block looked like in 1959. The building at right, 127 Arch, has a sign reading Trenton China Pottery over the doorway. 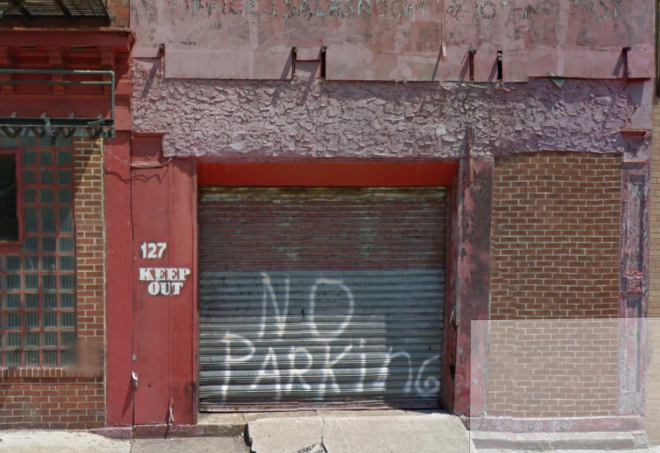 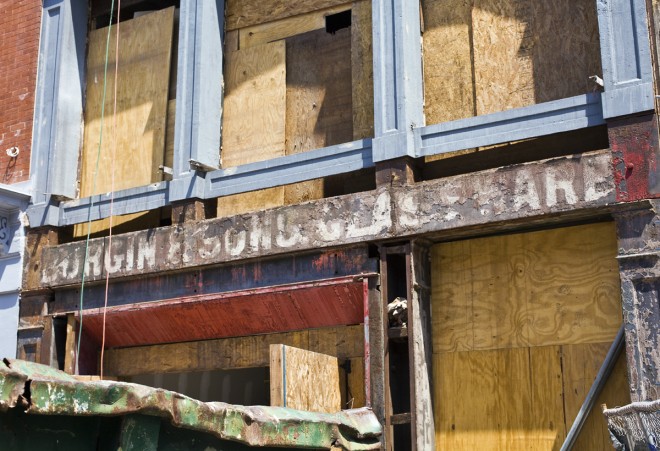 Underneath the stucco, and perhaps the Trenton China & Pottery sign as well, was this sign for Burgin & Sons Glassware. The company is listed at 127 Arch Street in an 1899 directory, however that storefront location was probably a wholesale showroom and office for the firm, which did the bulk of its business manufacturing an assortment of glass products, including bottles, milk jars, carboys and imitation leaded glass. The company, then known as Burgin & Pearsall, purchased an old glass works in 1836 at Girard and Montgomery Streets (then known as Franklin and Cherry Streets respectively). It closed in 1910 and is now a playground. 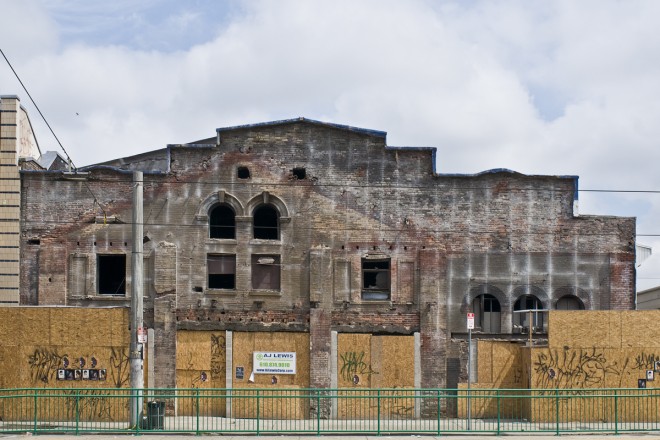 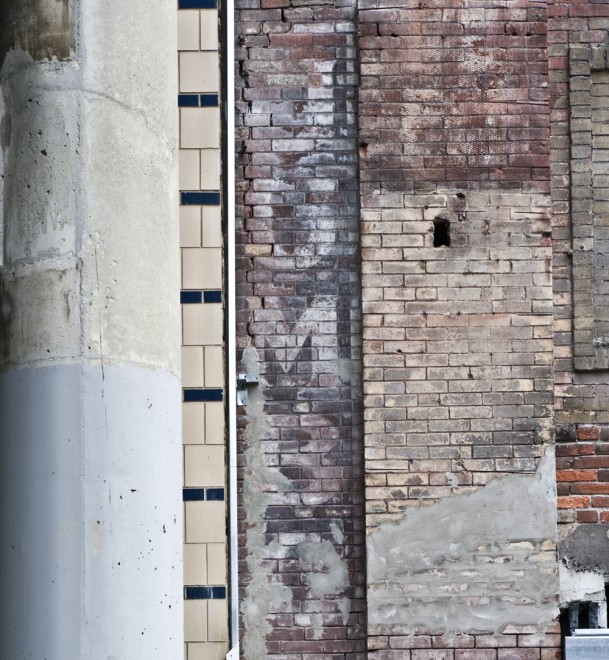 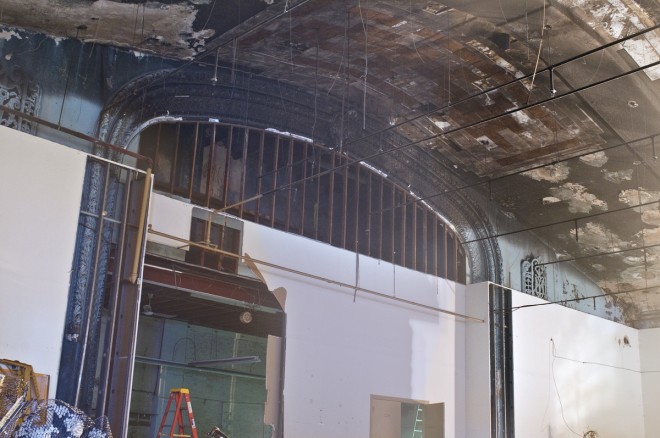 Interior of the Jumbo Theater during renovation in 2011 | Photo: Peter Woodall

Want to see more? For a superb collection of photos of the Jumbo both inside and out, click HERE. 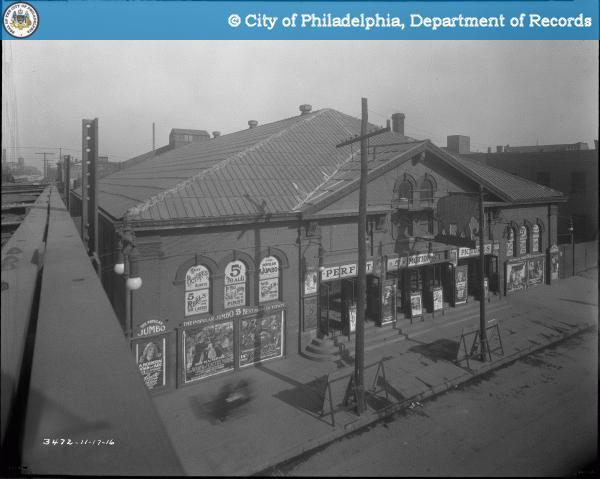 Here’s what the building looked like in 1916. It seemed rather implausible that so much of facade should have survived. 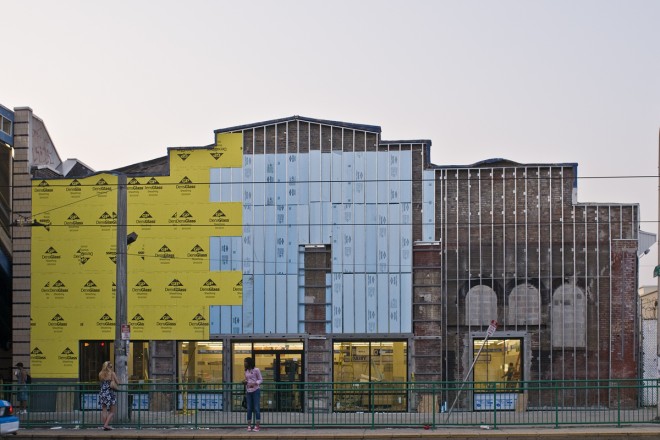 And by the looks of the way they installed the new facade, perhaps it will remain intact under there until the next time someone decides to make a change. 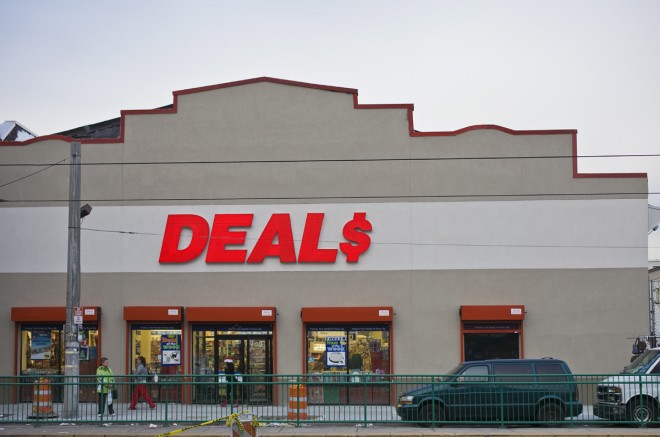 In the meantime, though, the exterior of DEAL$ gives little hint of what lies beneath. 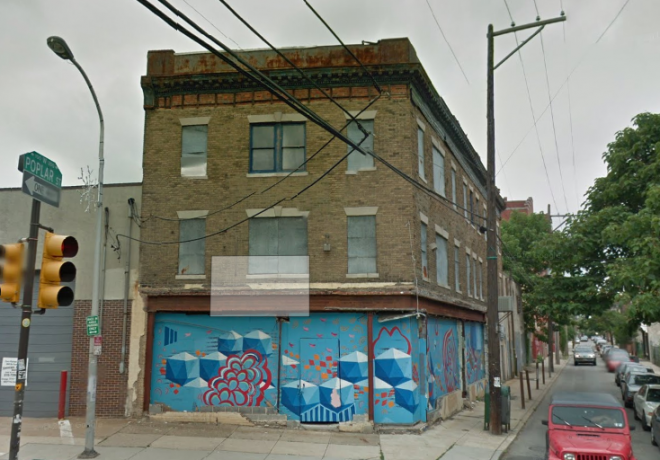 Word around the neighborhood was that Bart Blatstein’s Tower Investments was planning a boutique hotel for this corner. That talk has died down, but Tower did begin to demolish the building in May. 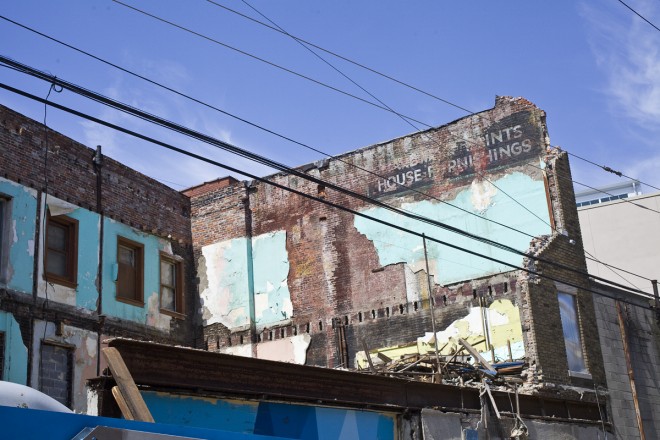 At first, there was a more modern looking script for “house furnishings,” with an older, illegible ghost sign underneath it. 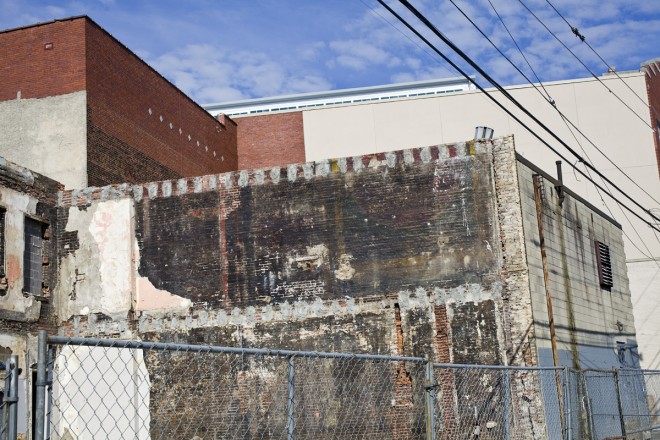 After more of the building was taken down, some of the plaster sloughed off revealing another ghost sign. 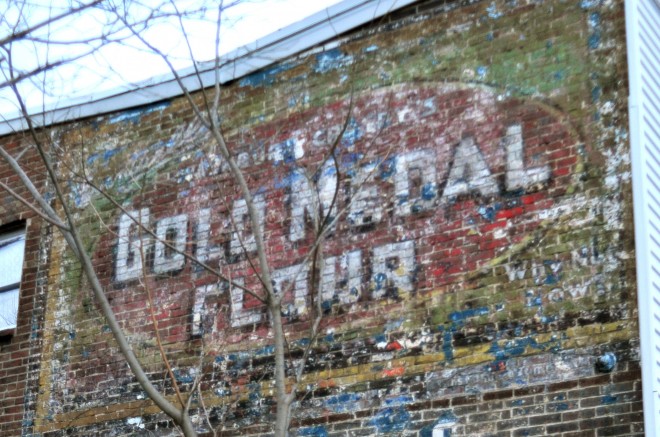 This one seemed unreadable, too, but after blowing it up and increasing the contrast, something about the color scheme reminded me of a Gold Medal Flour ghost sign I’d shot in Frankford a few years back. 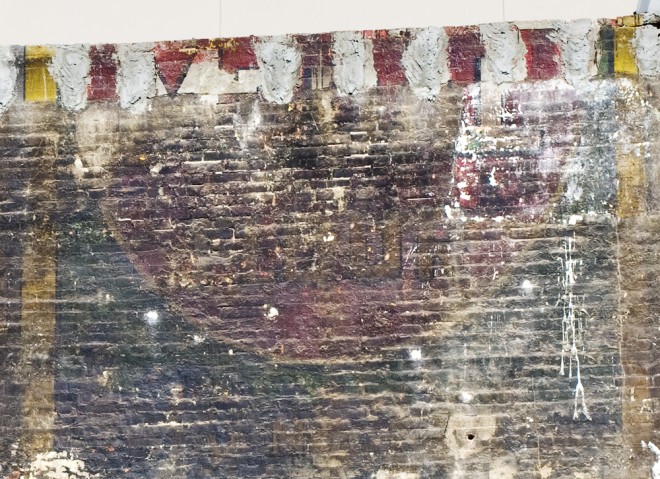 Now that I knew what words I was looking for, there they were, and even the few words visible at the bottom of the sign are recognizable if you look for Gold Medal’s slogan, “Why now now?” The wall was whitewashed soon after this photo was taken. 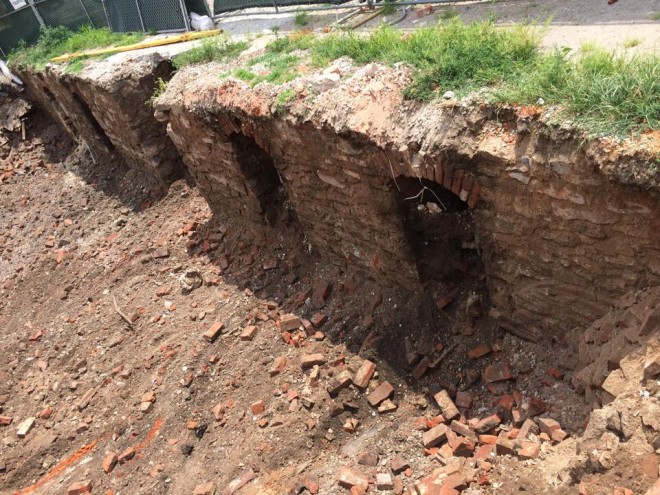 Construction site at the northeast corner of 2nd and Fairmount

Someone on Facebook posted this photo, wondering what these vaulted chambers might have been used for originally. I asked the folks over at the Society for Industrial Archaeology, and while there were no definite answers, one person wrote that vaulted storage areas beneath the adjacent sidewalk were very common in the 18th and 19th century. The brick arching was the only practical way to support these extended cellar areas, given the building techniques and materials of the time. 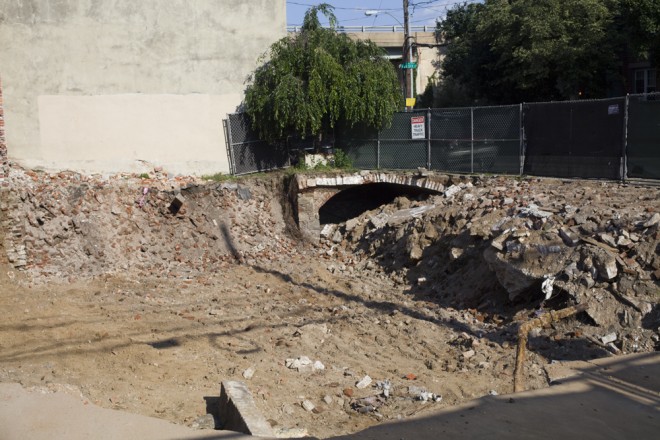 By the time I made it over to the construction site, the series of arched openings were gone, but one large culvert remained. Soon it too will be buried. 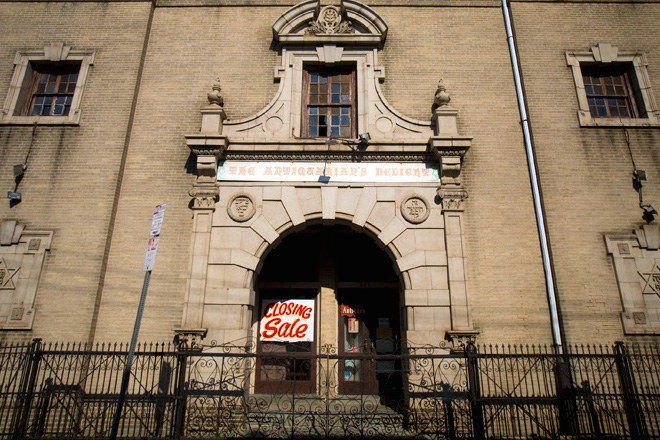 For many years, the sign for the Antiquarian’s Delight hung over the entrance to the former B’Nai Reuben Synagogue on 6th Street just north of Bainbridge in Queen Village. 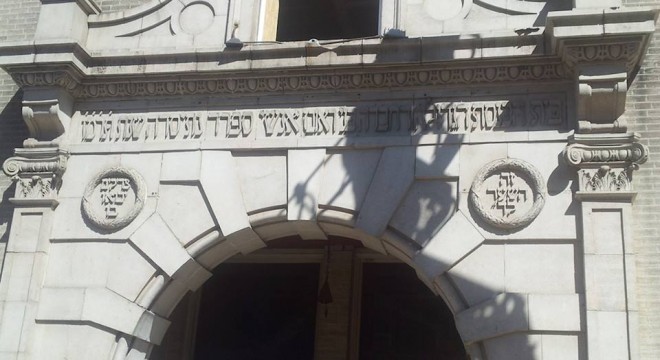 Hebrew writing above the entrance to the former Antiquarian Market | Photo: Morris Levin

The sign was removed during renovations, revealing the Hebrew inscription beneath. 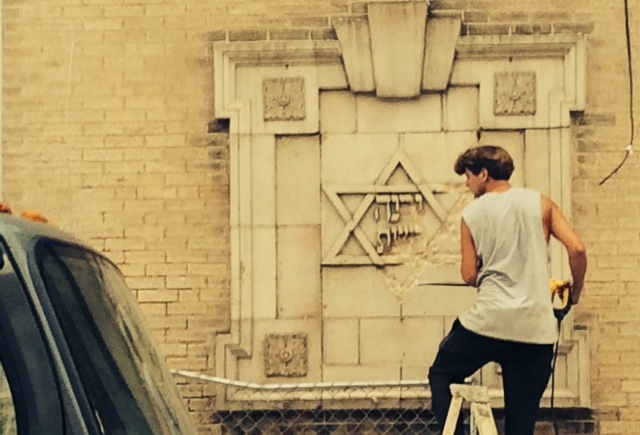 Chipping off a Star of David at the former B’Nai Reuben synagogue | Photo: Rob Kopf

The developers decided to remove all traces of Jewish iconography from the building, however they did so by chipping off the stone reliefs rather than simply covering them. 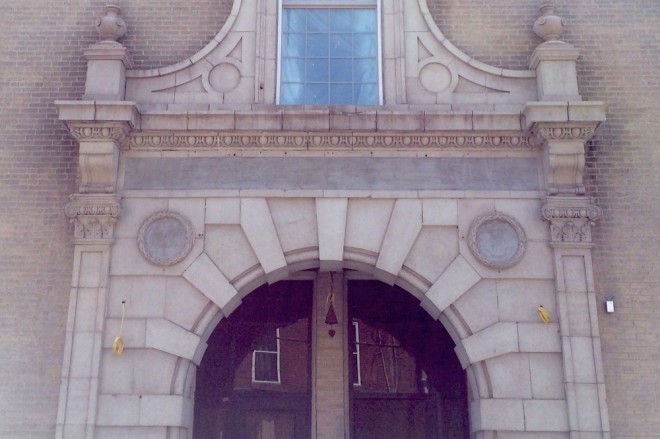 The Hebrew inscription above the door has been chipped off and then stuccoed over | Photo: Nathaniel Popkin

Now that small yet valuable piece of neighborhood and city history is gone forever. Next time, why not figure out a way to cover the reliefs without damaging them, there to be rediscovered one day, perhaps by someone who would value them differently?