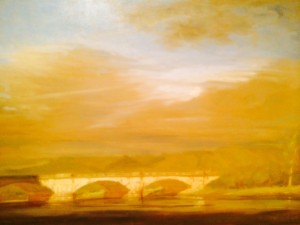 First place winner “After a Spring Storm: Columbia Bridge” by Patrick Connors, on display at the Athenaeum until August 8

How do you see the city’s historic landmarks? That’s the question the Athenaeum asked of artists this spring. Forty-five of them responded with paintings, drawings, and prints depicting Philadelphia buildings, ships, and bridges on the National Register of Historic Places. The work was reviewed by a jury that included Woodmere Art Museum director Bill Valerio and architect John Blatteau, as well as Athenaeum executive director Sandra Tatman. The jury gave the first place prize to Patrick Connors for his painting “After a Spring Storm: Columbia Bridge.”

This is the second year in a row the literary society and architectural archive on Washington Square has sought to use art to interpret “the historic fabric of the Athenaeum,” says Tatman. Last year, as part of the 2013 Hidden City Festival, artist Ruth Scott Blackson installed Through the pale door, which explored Edgar Allan Poe’s connection to the Athenaeum.

This year’s art exhibit is in celebration of the Athenaeum’s 200th Anniversary. Tatman says it’s been a success: more than a quarter of the work sold on opening night.

Artists produced interpretations of familiar Philadelphia icons, including the Benjamin Franklin Bridge, City Hall, Independence Hall, and Laurel Hill cemetery. Five artists took on the Athenaeum itself. Perhaps my favorite of these is Popo Flanigan’s acrylic on birch board painting, which includes this, from 1814, in script: The Athenaeum. It’s who I am and where I go. She affords me the reverie of other man’s words.

Architect Sherman Aronson provided one of the only interior interpretations in the show, and perhaps the most subjective view, a lovely freehand sketch of the Academy of Music filled with patrons.