Forgotten No More: the LeGar Building 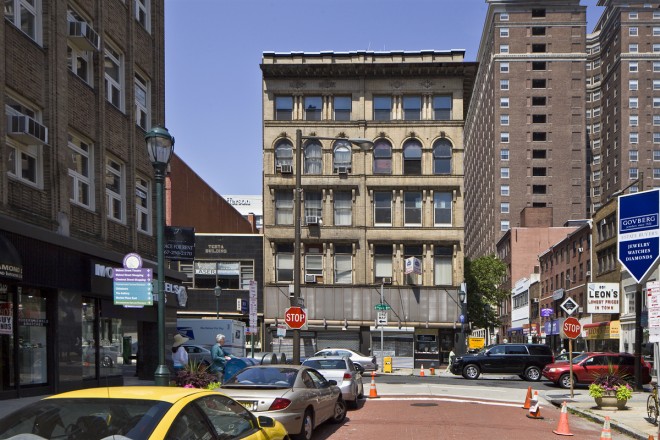 As I’ve stated before, some buildings I walk by often reach out and penetrate my soul, begging me not to let their origins get erased from our collective memory. At the southwest corner of 8th and Sansom, facing Jeweler’s Row, stands a dilapidated yet still beautiful building of this type that has held down the corner for 118 years. Known as the LeGar Building, it was one of the first buildings in the neighborhood to take Jeweler’s Row beyond its traditional home on the 700 block of Sansom Street.

The story of the LeGar begins with Irish immigrant Thomas D. Bowes, Sr in the mid 1890s. A real estate investor, he recognized the opportunity presented by a lot at 122-124 South 8th Street that had been recently cleared to upgrade the plumbing underneath in order to better serve the Times Annex, a long lost office building that stood at 804 Sansom. Here, Bowes envisioned a new office building that would be able to add to Jeweler’s Row without actually being on it. He commissioned local church architect Frank Watson, later of the renowned firm Watson & Huckel, who would go on to design St. Mark’s Episcopal Church in Frankford. 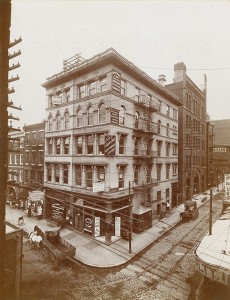 Watson chose an Italianate style for the five-story corner building. There are large bracketed hoods over the rectangular windows on the second and third floors, huge decorated keystones above the arches on the fourth, and small Ionic columns between each of the small rectangular windows on the fifth. Complete with medallions and other embellishments, the whole building is topped with a huge copper cornice.

Once completed in 1897, the new office building, at this point known as the Bowes Building,  would offer seven office/manufacturing/warehousing spaces and two retail spaces. Combining office and industrial spaces in the same building was common in Center City at the time, and Jeweler’s Row is the only place in the city where small-scale manufacturing on the upper floors continues to the  present day. Modern amenities such as a the presence of both a passenger and freight elevator became a big selling point, along with the building’s exclusive steam plant built by Onderdonk Heating & Ventilation, who usually installed such devices in much larger buildings like the Drexel Institute and the Lying in Charity Hospital. The leasable spaces upstairs ranged from 400 square foot closets to large 3100 square foot factory floors.

Almost immediately, numerous jewelry concerns moved offices and factory space into the Bowes Building, while Charles Scattergood’s Saloon and a telegraph office held down the two retail spaces. Many different companies quickly came and went through the building and not all of them had to do with jewelry. There were makers of typewriter ribbons, window cleaners, a brewer, a storage company, and an engraving company that spilled over from the nearby publishing district. While the Bowes Building held many different concerns, some are especially notable.

The Alfred Humbert & Son company, which produced jewelry and watches, was one of the building’s first tenants. It was bought out by the Fulmer & Myers jewelry company in 1899, but continued on, making plain rings that would later get embellished by Fulmer & Myers, who took a separate office in the Bowes Building. Both companies would stay in the building until 1922, some of its longest-lasting office tenants. 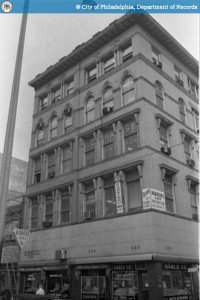 LeGar Building, 1965, already rocking two of the stores it has today. | Source: PhillyHistory.org

In 1905, Thomas D. Bowes Jr, son of the namesake of the Bowes Building, decided to make the family building his firm’s home for 4 years. He was a famous naval architect that designed fancy yachts for the wealthy Captains of Industry of the era. He later moved out to a larger office at the Lafayette Building (now Hotel Monaco). During World War I, he was asked by the U.S. Government to supervise the production of SC-1 Class Submarine Chasers and in World War II design minesweepers and the next generation of submarine chasers. His firm survived all the way until 1965. All of his records and drawings are stored at the Independence Seaport Museum.

In the mid 1926, the Bowes Building was emptied out, renovated, and re-born as the LeGar Building. Where this name comes from is a complete mystery, but has been used to describe this building as late as 2009. In 1929, the newly-named LeGar Building made news due to its run-in with an “experienced sneak-thief” who got inside and cleaned out some of the jewelry manufacturers and wholesalers in the upper floors.

In the late 1950s, the building’s longest-ever retail occupant, Harry Sable, “King of Wedding Bands”, opened the Sable Company store. Soon after that, in 1960, the street-level facade of the LeGar Building was modernized under the designs of local architect George W. Neff. This alteration turned the building’s two retail storefronts into no less than five. Four facing 8th Street, one facing Sansom. There were so many new stores in the relatively small space that the addresses for each one had to be split into halves, creating 122 1/2 and 124 1/2 South 8th Street and 802 1/2 Sansom.

By the mid-60s, Kanell Jewelers, Harry Merrill & Son, and the Sable Company were all present on the first floor, destined to continue in their respective spaces well into the 21st Century. In 1971, the LeGar Building was purchased by a partnership of jewelers lead by Harry Sable. In 1974, a three-alarm fire ripped through the building, destroying every store on the first floor. The ground floor was re-built shortly thereafter, its facade given the appearance it has today. 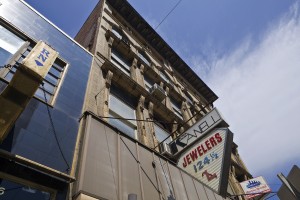 The triangular sign appears to be the same as the one in the 1965 photo above, however it not ways “JEWELERS” rather than ‘KANELL” | Photo: Peter Woodall

After Sable’s store closed in 2004, an ugly and protracted brother vs. brother legal battle ensued over the distribution of Harry Sable’s estate, which included his portion of the ownership of the LeGar Building. The dispute was finally decided in the New Jersey Superior Court case In the Matter of Harry Sable in 2009. Nonetheless, the city’s Office of Property Assessment still lists Harry Sable (who died in 2010) as part owner of the building.

While large areas of Center City in pretty much every direction around the LeGar Building have gone through drastic change in the last few decades, it and the rest of the old architecture Greater Jeweler’s Row district have remained relatively untouched in comparison, preserving the original look (on the upper floors) of most of them. While the facade of the Bowes/LeGar is relatively intact, it has definitely seen better days. Hopefully, once day soon, it will get the restoration it deserves.

Editor’s Note: The Shadow will be leading a “Forgotten Broad Street” tour on July 26. When it comes to the history of pretty much every darn building, vacant lot and redevelopment scheme, The Shadow Knows…check it out here!