Catalyst Of The North City 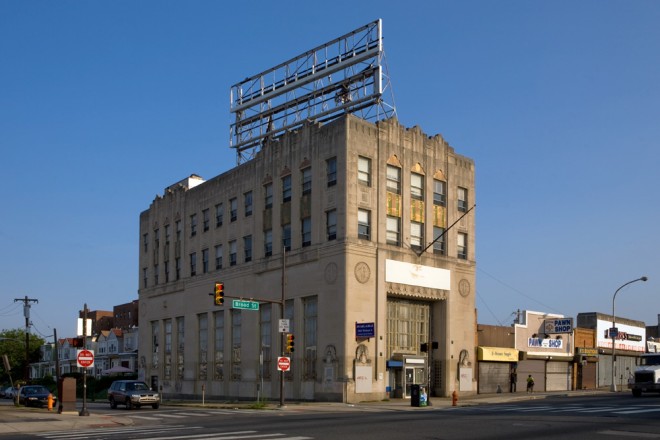 Until the early 1920s, the area around North Broad Street and Olney Avenue was open countryside, excepting for a few pockets of suburban houses built around the turn of the century. The calm, however, belied intense real estate speculation caused by the opening of construction of the Broad Street Subway in 1924. The subway would terminate here. Finally, the extensive grid of streets that had been platted decades before were paved. Developers put up thousands of row houses. 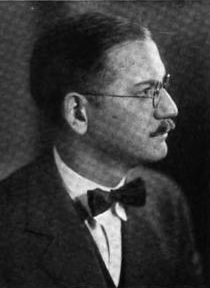 Seeking to cash in on the rapid development coming, a group of businessmen, including the polymath Frank H. Schrenk, formed the North City Business Organization. Legally deaf, Schrenk was state welterweight boxing champion, city bowling champion, a lawyer, and now a real estate mogul. He hoped to establish a major business corridor on North Broad Street and to do it he helped form the neighborhood’s first and only home-grown bank, the North City Trust Company.

Incorporated in June, 1928, North City opened for business in a makeshift North Broad Street building on October 24th of the same year, only seven weeks after the Broad Street Subway started running. Schrenk was its president. Being the only bank in the area, it flourished immediately as it handled most of the new mortgages and business loans. It managed to weather the 1929 stock market crash so well that in 1930, when other banks across the country were falling to pieces, North City Trust decided to move to a new headquarters.

The bank commissioned the firm of Thalheimer & Weitz to design a 13,144 square foot fortress on a 100′ x 42′ lot at Broad and Chew, one block north of the Olney terminal. The new building would not only support the needs of the North City Trust Company but also have two floors of leasable office space on top. Construction began in 1930 and was complete by the end of 1931. Its completion coincided with other major developments, such as the stunning Tudor-Revival Suffolk Manor and Norfolk Manor Apartment towers.

The new building featured massively tall windows along its street level façade, imbuing the high-ceilinged banking floor and mezzanine offices with sunlight. The façade of the upper floors seems to be a shorter version of Center City (then referred to as “MidCity”) office towers of the same era. The stone façade is heavy with detail, embellished with colorful decorations in some parts. It is obvious that this building was meant to beckon a rich future for North City. 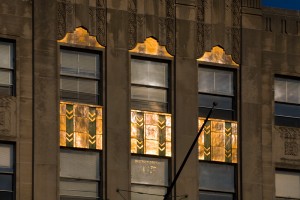 In March, 1933, just after the nationwide four day Banking Holiday imposed by the federal government that month, Frank Schrenk began an effort to reopen the banks that had been destroyed in the stock market crash in 1929. Along with the officers of 130 small banks like his that had survived the crash and were allowed to re-open on a restricted basis after the Banking Holiday, Schrenk drafted and presented a plan to the federal government to re-build the nation’s financial institutions. This first effort failed.

Schrenk then invited the presidents of 5,000 banks to a conference with the same purpose. Three hundred attended and came together to form the National Depositors Committee with Schrenk as chairman. Schrenk then spent the next seven months and all his personal savings traveling around the country making speeches and meeting with officials, working during all of his waking hours with little success. After dinner on September 30th, 1933, Schrenk went to his office in the Bailey Building at 1218 Chestnut Street and shot himself in the head.

Schrenk’s suicide shocked he city led to the end of both National Depositors Committee and the North City Trust Company. In fact, the North City Trust was liquidated exactly one year later, September 30th, 1934. Being one of the finest buildings in the neighborhood, the bank’s home at 5700 North Broad didn’t stay empty long. Before the year was out, it had become a branch of the West Columbia Avenue Building and Loan Association. 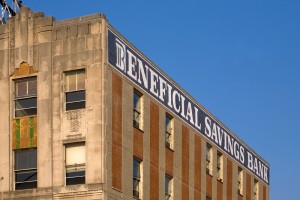 The billboard has crumbled, but the hand painted sign endures | Photo: Bradley Maule

On February 3rd, 1939, the Seaboard Mutual Casualty Company purchased the building and named it the “Seaboard Building.” The insurance concern occupied the entire building, using the old banking floor for customers and the upper floors for offices. In 1945, in an attempt to solve massive financial difficulties (which they were trying to keep a secret), Seaboard Mutual sold 5700 North Broad to the Beneficial Savings Fund Society, which hoped to establish a presence in this part of North Philadelphia.

After a short renovation, the Beneficial Saving’s Fund Society’s new North Philadelphia branch opened on September 9th, 1946 and would make use of the ground floor–all the way until December 20th, 2008. In 1950, bank officials commissioned the Cutler Sign Advertising Company to erect a giant 17′ x 48′ billboard on the roof bearing the Beneficial name.

Beneficial occupied the retail floor as firm after firm came and left the offices above: the Philadelphia Baker’s Association in the 1950s, the Mid-Atlantic Regional HQ of the Jewish Welfare Board in the 1960s, and the Northern Division office of Family Service of Philadelphia from the 1960s to the 1980s, among others. 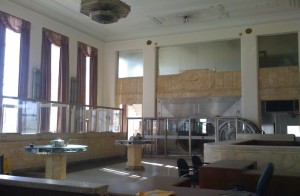 After Beneficial finally left the building in 2008, the company’s emblazonments on the façade were covered over; the billboard went into commercial use. On January 12th, 2012, Precision Realty Group purchased the building for $500,000. At first, Precision put the vacant building up for lease, but it now has listed it for sale for $549,000. These six years without a tenant is the longest in the building’s 83 year history. Much of the original banking floor is intact and the offices upstairs are rated Class “B”.

Hopefully a new owner will come along and return this building to the condition it deserves. I propose re-naming it the Schrenk Building, after the brilliant and tragic Catalyst of the North City.