A Place Called The Plateau Is Where Everybody Goes 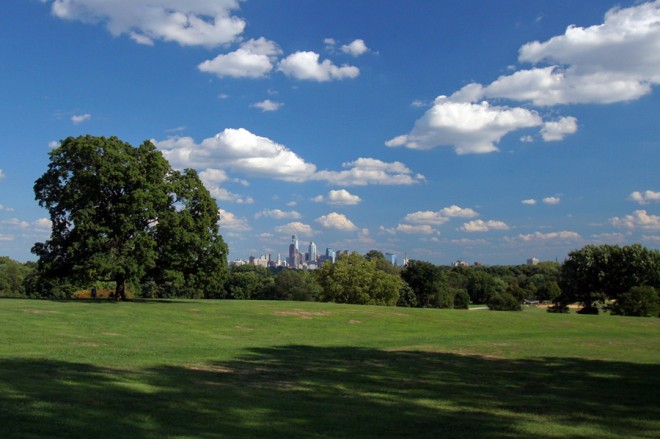 Fairmount Park in the summer; lookin’ good on the street | Photo: Bradley Maule

O! Fairmount Park. Known the world over, our beloved 10,000-acre+ system of verdant public space knows no better vista than that at the Belmont Plateau. Yesterday, its green grassy grove got just a little greener and groovier, as the Fairmount Park Conservancy formally dedicated the John K. Binswanger Grove of Park Champions. A plaque was unveiled to mark the seven trees planted last year—three sugar maples, two white oaks, two sweetgums, all native trees—as the first-of-its-kind stand of new trees on the Plateau.

John Binswanger, chairman of the large real estate group of his family’s name, for eleven years served on the Fairmount Park Commission, as his father did before him. In 1998, he was one of the founders of the Fairmount Park Conservancy, the nonprofit, collaborative partner of the City’s Department of Parks and Recreation. The grove bearing his name intentionally soaks in the classic view of the skyline, with a bench positioned there for optimal viewing. 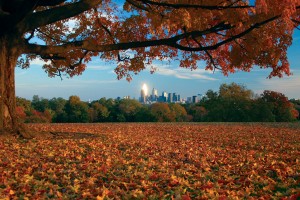 As they go, Philly’s skyline is among the best in America. New York’s clearly takes the crown, by default, as our “world city” known for its many many buildings that go up to the sky. Sure its skyline is bigger, but without the twin towers and with large towers continually crowding in around the Empire State Building, it’s gotten a little monotonous. Chicago’s? Okay, Chicago’s is hard to beat. LA? Skyscraper nerds aside, can anyone name a single LA tower? Houston? Bo-ring.

The Philly skyline is the porridge: it’s just right. For the past thirty years, our skyline has made up for the lost time of a silly gentleman’s agreement. Now, instead of a laughed-at flat-top, from most angles it has an almost pyramidal grouping, a bell curve in our Bell town. The Comcast Innovation & Technology Center might throw that symmetry out of whack, but no one’s too upset that a Norman Foster tower will grow the skyline just a little more. And what better place to watch it grow than from a picnic blanket on the Plateau?

The skyline from the South Street Bridge—that’s our postcard view. The skyline from the steps of the Art Museum? That’s the one our tourists Instagram, arms raised high like whatshisface. From the Sports Complex? That’s the Philly skyline the rest of the country sees when the camera pans back slowly while the Chevy and Budweiser ads rotate as NBC Sunday Night Football comes back from commercial break. 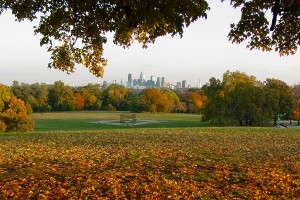 But the Plateau? That’s Philly’s Philly skyline. From a high hill four miles northwest of Center City, Belmont Mansion has reigned since 1745, when William Peters built the Palladian home from his money as the Penn family’s land agent. Some time around 1900, that family’s patriarch tipped his Quaker hat when his 37-foot likeness was placed atop City Hall, which still stands out in the Plateau view. As the skyline has risen outward from Billy Penn’s hat—Liberty Place, Comcast Center, Cira Centre, and now all the towers under construction in University City and soon the CITC—the Plateau’s vista, framed by West Fairmount Park’s wooded areas, including the single most spectacular maple in the city, large and lonely in the center of the Plateau, has only gotten better.

Will Smith brought the Plateau to the rest of the world in 1991 when “Summertime” became DJ Jazzy Jeff & the Fresh Prince’s greatest hit. West Philly families have barbecued there for generations. High school kids from the Northeast and the suburbs compete against their city opponents on the cross country course. Mountain bikers, softball players, kite flyers, tree climbers, pétanque throwers … all Plateau people. Despite its inaccessibility on SEPTA (the 38 bus comes closest, with a stop a half-mile away on Belmont Avenue), the Plateau serves the cross section of city constituency.

When the Fairmount Park Commission rededicated it in 1984, it called the Belmont Plateau “Philadelphia’s most scenic overlook.” Thirty years later, with a renewed dedication, a new grove of trees from which to enjoy it, and an eye toward the future, FPC’s successors at Parks & Rec and the Fairmount Park Conservancy are taking strides to ensure the Plateau’s place as Philadelphia’s most scenic overlook, and indeed, its place in our hearts. 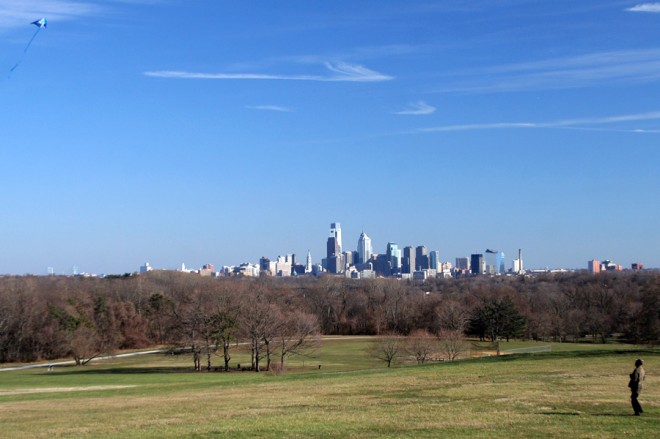