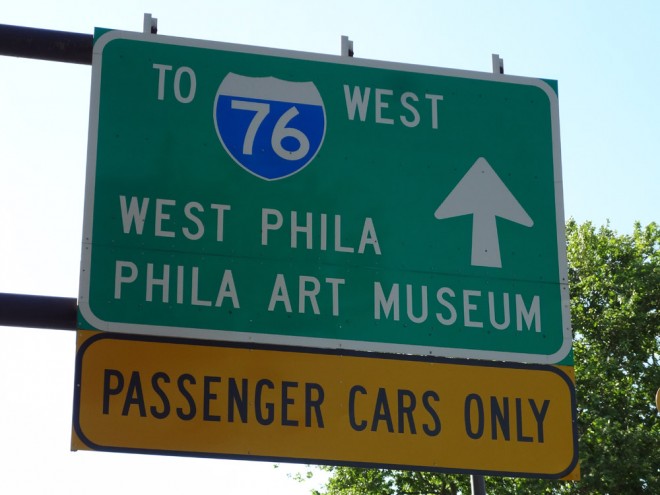 Why not bikes? | Photo: Flint Weller

Like a lot of cyclists in Philadelphia, the very words “Eakins Oval” send chills down my spine. Do you ride a bike? Raise your hand if you haven’t experienced some kind of terrifying near-death incident while trying to navigate safely between five lanes of high-speed traffic. 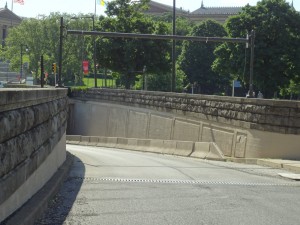 While the Schuylkill Banks has been a blessing for bike commuters, for those traveling westbound to Drexel and Powelton Village via the Spring Garden Street Bridge, the trail can take you a little out of your way. A lot out of your way actually, now that the Race Street entrance to the trail is closed indefinitely, following damage from last month’s flood. If you don’t want to risk your neck in traffic (or break the law by hopping the sidewalk) you’re kinda out of luck.

Yet right below the Oval is the Spring Garden Tunnel. This two-track tunnel carried the 43 streetcar until the mid-1950s (you can just make it out in this detail from a 1944 PTC map; it was later repurposed as two lanes for cars heading westbound.

Today, only one lane is in use, the left side. In theory, it seems both obvious and practical to reopen the right lane for bikes heading west to the bridge, in turn creating a much less dangerous situation on the surface. In reality, I learned that it’s not that simple… and might not be such a good idea.

But first, I wanted to experience the tunnel for myself. Together with my buddy Flint (who took all of the photos here), we crossed the Spring Garden Bridge eastbound, and merged onto Eakins. It was a Sunday afternoon, so traffic wasn’t as bad as it could have been, but it was still a challenge to safely make our way to the tunnel entrance. 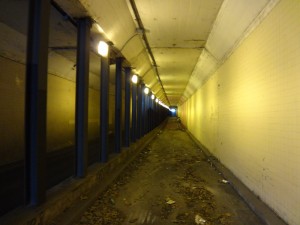 There’s certainly more than enough room for a bike lane down there, and in general the roadway is in good condition. One pitfall we came across was the drainage grates, which ran parallel with our bike wheels. It was a good thing we were riding slowly, because unexpectedly hitting one of those grates at high speed could cause serious injury.

Another problem was the lighting, which was fairly dim. A more pressing area of concern was the tunnel exit. The pillars that separate the two roadways constituted a blind spot: so while we could hear the oncoming cars, we couldn’t actually see them approaching. The two roadways come together very quickly, and there’s dangerously little room as the exit currently exists for cyclists to merge with speeding cars, so having a visual is crucial. In the end, we had to trust our ears and wait for an extended delay before proceeding to the bridge and crossing back into West Philadelphia.

So, is there any way to convert that unused roadway as a safe westbound alternative to the Schuylkill Banks or the Oval? The first thing I learned is that if it’s possible, it may take a LONG time to achieve that goal, because the wheels of city government grind so slowly.

“In our experience, it’s tough to get the city to focus on doing anything quickly. It takes years for changes to be made to roadways,” said Sarah Clark Stuart, policy director at the Bicycle Coalition. She added that, while an interesting concept, it never came up in the Bike/Ped Master Plan that guided the designation of bike paths throughout the city. But she expressed other concerns as well. “The speed of the traffic, the lighting… these are all things that would have to be looked at when discussing whether converting a lane is possible.” Even something as seemingly simple as replacing the drainage grates is difficult. “We’ve gone to great lengths to remedy grates on bridges. It’s complicated,” Stuart told me. “It would be hard to fix over the short-term.”

Jeannette Brugger of the Philadelphia City Planning Commission tended to agree. “I see the positive thoughts about the idea, that bikes want to stay out of Eakins Oval. In fact, my husband has been saying the same thing for the past five years. And, there is definitely work we can do to make Eakins Oval safer.” 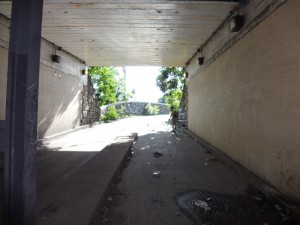 Exit into the light, watch your left. | Photo: Flint Weller

But, she added, converting the tunnel’s unused lanes for bike use has more cons than pros. The greatest one she identified is personal safety. “Compared to the Fifth Street tunnel, the Spring Garden tunnel is longer and darker. There’s a bike lane in the Fifth Street tunnel and you’re next to cars, but you know you’ll be aboveground soon, and there’s adequate lighting. We don’t feel like that’s the case in the Spring Garden tunnel. It’s a long segment of roadway, and there are no bike cops underground.”

While Brugger acknowledged that cops could be assigned to the route, or that security cameras could be mounted, the fact of the matter is that a project like that has never been a high priority. And, like Clark, she agreed that the timeline for something like that would be long. “If the tunnel was the only way to get through, it might be something to dedicate a lot of resources to.” But a lot of questions would have to be answered first. “How would we pay for lighting, and what would be involved in terms of police and security? Would we have to move the jersey barriers, and how would we improve the entrance and exit to the tunnel? This isn’t like striping a bike lane, it’s much more complicated. And even striping a bike lane takes time,” because of City Council involvement, and the need for studies and planning.

So while the Spring Garden tunnel looks like an ideal route to get to West Philly from the Art Museum, don’t hold your breath. For a project like this to happen, there needs to be a lot of planning, a demonstrable need for the expansion, legislative hurdles, and plenty of work to make the route safe. In the meantime, Brugger (herself a cyclist) says, “If you really don’t like Eakins Oval, you can go around it. A good alternative route is the Anne d’Harnoncourt Drive behind the Art Museum. It’s a hill and requires a little legwork… but that’s why we have gears.”

Brendan Skwire Brendan Skwire has lived in southwest Philadelphia for the past 15 years. A writer, editor, and sometime musician, he has a deep and abiding interest in urbanism, running and bicycling, historic preservation, and adaptive reuse. You can often find Brendan homebrewing in Bridesburg. Follow @brendancalling on Twitter and Instagram.