The New Life Of The Old Family Court (And Its Murals) 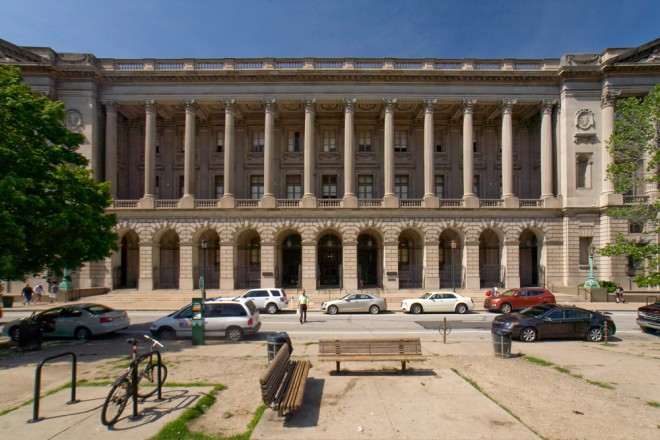 Chances are Kimpton will spruce up the plaza in front of what is now the Family Court when they begin renovating it next year | Photo: Bradley Maule

When news broke that the Family Court building, at 1801 Vine Street, was on the bidding block, a flock of developers pushed to nab the iconic building. New York’s Peebles Corporation proposal won out, and they’ve partnered with Kimpton Hotels to bring Philadelphia that company’s third adaptive hotel renovation (after Hotel Palomar in the Architects Building and Hotel Monaco in the Lafayette Building). The Philadelphia Register of Historic Places ensures not only the preservation of its handsome exterior, but also its famous Public Works Administration murals.

Though the deal has not yet been formalized, Peebles is expected to buy the property for $4.5 million, as reported by the Inquirer’s Jennifer Lin. They estimate the hotel conversion to cost some $90 million, one-third of which would be financed through equity from MacFarlane Partners, a minority-owned investment management company from California. Peebles, itself one of the largest minority-owned development companies in the US (its owner Don Peebles ranking among the wealthiest African-Americans), has retained P&A Associates as its local development partner, and McKissack & McKissack, the country’s oldest minority-owned construction company, will be lead contractor. 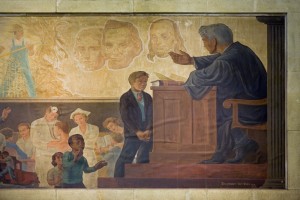 “Son, act like the floating heads behind you for a better life” | Photo: Bradley Maule

With the Family Court set to relocate to its new building at 15th and Arch Streets (across from LOVE Park), that removes the biggest obstacle from the public’s viewing of the historic, allegorical murals inside. “The art is staying and will be preserved—and publicly accessible,” said Jessica Calter, director of marketing at Philadelphia Industrial Development Corporation, which currently manages 1801 Vine Street.

Built between 1938 and 1941, 1801 Vine Street was designed by famed architect John T. Windrim and his colleague William Richard Morton Keast. Along with its neighbor, the Free Library of Philadelphia’s central branch, the pair intentionally draw their cues from the Hôtel de Crillon and the French Naval Ministry on Paris’ Place de la Concorde. (The Ben Franklin Parkway, after all, was to be Philadelphia’s Champs-Élysées.)

The building was added to the Philadelphia Register of Historic Places in 1971, standing “as one of the most prominent public buildings in the City of Philadelphia and one of the city’s most significant legacies from the Great Depression era of federally-funded public works projects known popularly as the New Deal,” according to its nomination form to the Historic Commission. Indeed, the Family Court building was funded largely by Franklin Roosevelt’s then-new Public Works Administration.

That includes the building’s interior, which features stained glass work from D’Ascenzo Studios and 37 murals created by nine artists of local and national significance between 1939 and 1940 and which depict a very clear social agenda. One mural located in what is now the judges’ chambers, for instance, depicts a group of Boy Scouts alongside an attentive teacher, a group of children playing in Fairmount Park, and a friendly crossing guard. It recalls a sort of far-gone naïveté that seemed so prevalent in post-Depression America, and—like all good art—provides a gateway to the dominating mentalities of the past. Other murals feature influential Americans across various disciplines, such as Mark Twain, Ben Franklin, Abraham Lincoln, and Stephen Girard.

“The Family Court’s collection of murals is a virtual museum of New Deal art,” said Ben Leech, director of advocacy at the Preservation Alliance for Greater Philadelphia. While the building itself was added to the Register in 1971, the murals, along with a list of other interior features like lighting fixtures and handrails, didn’t get the same protection until 2011. 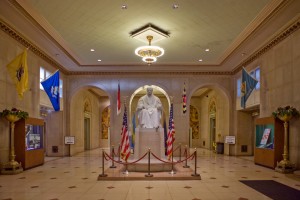 One current uncertainty in the property’s redevelopment, however, lies with an enormous marble sculpture in the center of the Family Court’s main lobby, of Judge Charles Lincoln Brown. Carved by PAFA graduate Walker Hancock, whose more visible Angel of the Resurrection stands on the 29th Street side of 30th Street Station’s main waiting room, the 26,000 lb statue requires the support of a dedicated column in the basement. It also features a pedestal with a built-in bench—which has been cordoned off by a rope for nearly 30 years. The statue honors a judge instrumental in the formation of the Municipal Court and who served as its first President Judge. Perhaps most famously, Judge Brown in 1923 ruled in favor of an 11-year-old fan, Robert Cotter, who the Phillies had arrested when he wouldn’t return a foul ball he’d caught. The case, which Dan McQuade profiled for the Weekly in 2007 as the Phillies approached their 10,000th franchise loss, set a precedent that stands today: that fans can keep the balls batted into the stands.

So far, according to employees in the Family Court building, PIDC has been hard pressed to find any interested parties, likely due to the sculpture’s massive proportions. (This in spite of the fact that PIDC would pay the moving costs.)

While Citizens Bank Park might seem a logical landing point, the Phillies have indicated they have no interest in the statue.

The bidding process for 1801 Vine Street has been praised by historical advocates, including the Preservation Alliance’s Leech. “We think that the RFP process was handled responsibly and are very excited by the initial plans developed by Peebles and Kimpton,” Leech said.

In October of 2012 the PIDC announced out a request for proposals for the Family Court building’s redevelopment. By December of that year they reportedly had received nine proposals, a shortlist that included Dranoff Properties, HRI Properties, Logan Square Holdings, P&A Associates, and the Peebles Corporation. In the end, the city went with Peebles, in large part thanks to the firm’s ability to bypass public funding, which most of the other proposals relied on. Peebles’ portfolio includes the development and renovations of buildings in New York City, Las Vegas, Miami, and Washington. D.C.

According to the Peebles Corporation web site, updated amenities will include not only some of the largest hotel rooms in the city, but also a fitness center, a restaurant, and rooftop lounge area. The Kimpton hotel, the specific brand as yet undetermined, is expected to break ground in 2015 and be completed by 2017.

The timing should jibe well with a flurry of comings and goings on Logan Square; by then, the Four Seasons (on the other side of the circle) should have relocated to the new Comcast Innovation and Technology Center, the Mormon Temple and its adjoining tower should be complete, and the Barnes Foundation will be celebrating five years on the Parkway.

The Family Court will move to its new building at 15th & Arch in the second half of this year, according to the PIDC’s Calter.

To launch a gallery of Family Court photos by Bradley Maule, click any of the images below.