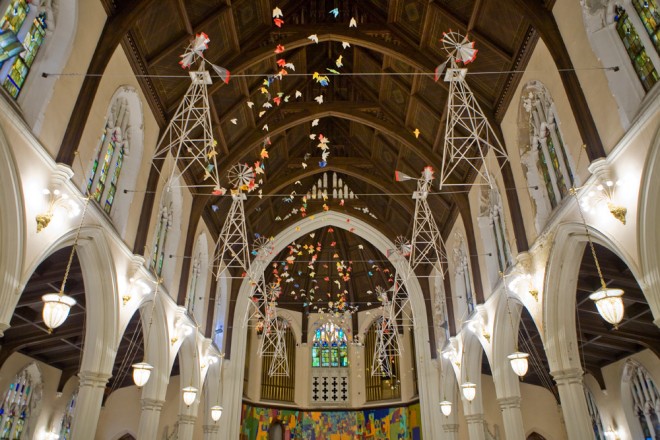 Right smack in the heart of the modern era Avenue of the Arts, a 114-year-old Gothic Revival church stands as a dedication to its predecessors, even as newer, bigger neighbors have come, gone, and come again. The Chambers-Wylie Memorial Presbyterian Church survived many ups and downs throughout the 20th Century, its newest life approaching its first decade as the Broad Street Ministry. 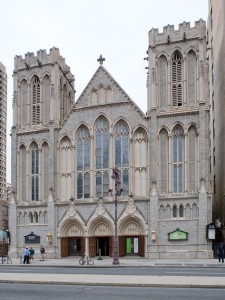 In 1825, a 27-year-old devout yet unordained minister named John Chambers came to Philadelphia and founded what was briefly known as the Ninth Presbyterian Church and later became the First Independent Presbyterian Church of Philadelphia, operating outside the purview of the city’s Presbytery. Immediately one of the most popular churches in town—it later counted John Wanamaker among its members—the congregation moved into a new edifice on the northeast corner of Broad and Sansom, a sparsely populated area at the time. By the 1850s, the church had expanded the building to its full size and transformed it into a Greek Revival temple with ionic columns (architect unknown, but a later addition was carried out by James Windrim). In 1873, John Chambers, near the end of his life, decided that the only way to keep the congregation going after he was gone was to join the Presbyterian Church of Philadelphia. After doing so, the church was then reborn as the Chambers Presbyterian Church. He died soon after.

The Wylie Memorial Church, built at 315-27 South Broad Street in 1854 as the First Reformed Presbyterian Church, was named for Rev. Dr. Samuel T. Wylie in 1885 upon its joining with the General Assembly of the Presbyterian Church. Wylie was a pastor and teacher who preached at this congregation over its many different iterations since 1802. His son, Rev. Dr. Theodore W.J. Wylie, was pastor at the time. 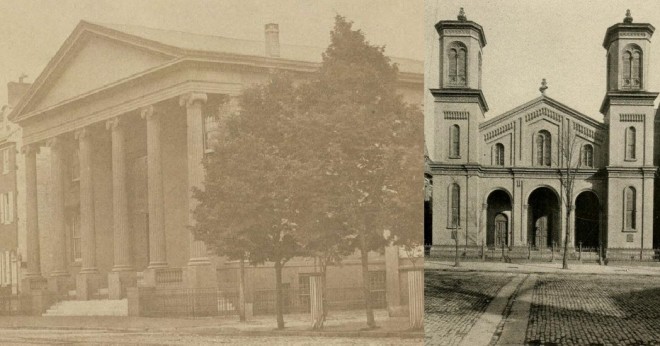 After years of discussion, the two congregations decided to merge in 1897, by which time both had become Broad Street powerhouses. The official unification of Chambers and Wylie took place on May 27th, 1897. All worship moved to the Chambers Church for the next two years while an architectural design competition determined the building that would replace of the old Wylie Memorial.

In December 1899, Rankin & Kellogg’s Gothic Revival design won the competition and a contract was signed with builders J.E. and A.L. Pennock. The Chambers Church was sold for $412,500, and immediately resold to church member Thomas Wanamaker, who demolished and replaced it with the North American Building. The congregants temporarily held services at the Epiphany Church at 15th & Chestnut, a building a that time owned by Chambers-Wylie member John Wanamaker. The cornerstone for the new church at 315 South Broad Street was laid on April 7th, 1900. 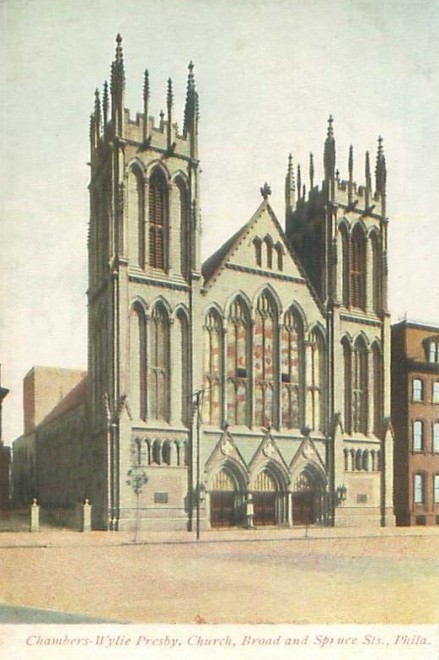 The brand new Chambers-Wylie Church was completed in December 1901, coming in over budget at $103,915.66. Indiana Limestone adorned all sides of the building, obviously without the knowledge that taller buildings would one day obscure every side. The design of the 76-foot-wide Broad Street frontage was based on Ripon Cathedral in Yorkshire, England. The entrance vestibule, covered in oak, extends the full width of the building. Its wide staircases lead up to the 800-seat main auditorium and down to the large lecture hall in the basement. The Sunday School, accessed from the lecture hall, is in the rear. A $10,000 organ was installed, considered one of the finest in America. John Wanamaker provided all the cloth and cushioning required. The stained glass was designed by the famous Nicola D’Ascenzo.

Once in the new building, the Chambers-Wylie Church encountered a string of bad luck with its pastors. Thomas A. Hoyt carried over pastorship from the old church, but he only stayed for a short time and soon retired. His successor, E. Trumbull Lee, lasted until 1906 before taking a position with the First Presbyterian Church in Wilkinsburg, PA. After that, the church had difficulty getting a new pastor. The Board of Trustees demanded a venerated, experienced pastor for this new and esteemed church, but no one would accept an offer. Divisions arose in the board and the pastor problem became something of a scandal. One pastor that was offered the position claimed that he would not accept due to anonymous threats in the mail from who he presumed to be angry board member.

In a desperate move, the Chambers-Wylie Church hosted the 1908 Pastors Conference, presumably with hopes that a new leader could be found. Finally, Rev. Dr. Frank DeWitt Talmage accepted the call. To the church, he embodied the best of both worlds: the son of a highly-recognized Presbyterian minister but, at 40, youthful enough to stay for the long haul. Unfortunately, it didn’t work out that way. In February of 1912, Talmage died of heart failure induced by a nervous breakdown. He left the congregation in shambles. Not only were they without a pastor once again, but they were also tied up in a lawsuit over the construction of their Mount Cavalry Mission in Eastwick (long gone). 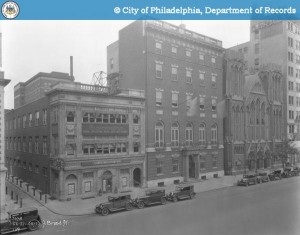 After that, Rev. Dr. John Grant Newman came along to at last save the day (and the church). He stuck around for the next three decades, bringing the church along for the big changes that would occur in the neighborhood over that time. When the neighborhood’s wealthy residents moved away, Newman infused the congregation with new life by focusing services toward music. Newman had been in a brass band at Maryville College (where he was a student and later a professor of Latin language and literature) and used his love of music to engage the apartment dwellers, transient hotel guests, and office workers in the skyscrapers rising nearby. Newman did catch some criticism, however, since at the time the church was still in possession of hundreds of thousands of dollars left over from the sale of the old Chambers Church and did not engage in any community service.

After Newman retired in 1940, another pastor took the church further into the 20th Century. Rev. Dr. John C. McKirachan started up a religious radio show on WFIL geared toward servicemen/women during World War II. The next pastor, Howard Moody Morgan, was a famous Presbyterian minister who traveled the country giving lectures and had books of his sermons and other writings published. Coincidentally, he was born the same year the church was under construction, close to the quarry where the materials making up the façade and support beams came from.

At the end of the 20th Century, the Chambers-Wylie Memorial Presbyterian Church was falling into decline, losing membership and importance. In 1999, when the church’s final pastor, Rev. Dr. William J. Larkin, died, it had only 100 members. The Presbytery of Philadelphia closed the church in January 2001 and leased the building’s 27,000 square feet of space to the University of the Arts (based across the street in Dorrance Hamilton Hall, the all-star building born as Pennsylvania Institution for the Deaf and Dumb designed by John Haviland, modified by William Strickland and later Frank Furness). UArts used the church for classroom, event, and performance space for the next four years.

Then, on May 13th, 2005, a bit of a miracle happened. Presbyterian minister and Wayne, PA native Bill Golderer, with the help of six Presbyterian congregations, reopened the Chambers-Wylie Church as the Broad Street Ministry. This new kind of Presbyterian Church, now in its ninth year, has successfully brought the old church back to life and has become a big part of the local community through its outreach to the homeless and its appeal to members of every facet of society. In 2006, they received 501(c)3 status and are now focused on acquiring the church building from the Philadelphia Presbytery.

As it turns out, this is a South Broad Street story with a happy ending. Today, the Chambers-Wylie Memorial Presbyterian Church building is more active and its work more important than it has been in decades. Just as it has found its way into the 21st Century, so too will the block it calls home. On top of UArts’ Hamilton Hall and the Kimmel Center across the street, the 590-foot SLS International, proposed by Carl Dranoff, will soon rise directly next door. After decades of blight resulting from be the questionable demolition of the City Club/Fels-Drexel Mansion in 1999 (creating the big empty lot next door that breathed transitory life last year as the PHS Popup Garden), the arson of the Philadelphia International Records Building in 2010, and the abject abandonment of the Piccadilly Dine-and-Dance at 311 South Broad, this block will at last return to glory. 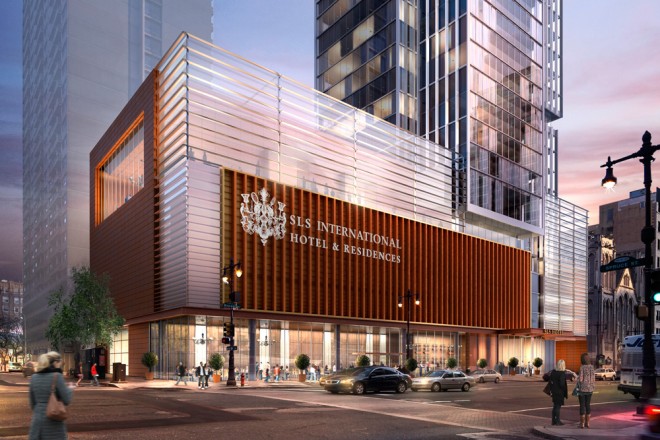 The new 300 block of South Broad Street. The old Chambers-Wylie, once considered large and imposing, will be dwarfed… and that’s fine. | Rendering courtesy of KPF and Dranoff Properties