Philadelphia’s major rewrite of its zoning code in 2012 embraced urbanist principles such as increasing density, encouraging mixed use and reducing the number of new single-family homes with first floor garages. Developers have been less than enthusiastic about the new code, however, and have sought variances for dozens of projects from the Zoning Board of Adjustment (ZBA) in the name of providing what the market wants. 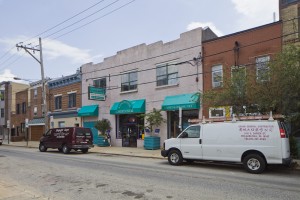 Klinghoffer Carpet at 734-38 Bainbridge Street would be torn down and replaced by three single family homes if the ZBA grants Robert Volpe a variance. | Photo: Peter Woodall

In these instances, the developer has to make a case for “economic hardship” to the ZBA which shows that development isn’t financially feasible. One developer who received a variance from the ZBA last year was Robert Volpe, president of Lily Properties Development. Volpe proposed two new row houses with ground floor garages facing the street just south of South Street on Eighth Street.

Neighbors argued–and the Bella Vista Neighbors Association’s zoning committee concurred–that the garages would be detrimental to the health of the South Street district. But the ZBA ruled for Volpe and the two houses were built according to his plans, a common outcome, according to Inquirer architecture critic Inga Saffron.

Now, Volpe is back with a proposal to build seven single-family row homes a half block away, four of which would have first floor garages that would require variances from the ZBA. His plan, which will go before the ZBA Wednesday at 2PM, has angered some nearby residents who are fearful of losing the urban life and vitality they say gives the neighborhood its value. 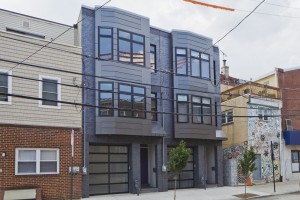 The project involves two lots which face each other across Bainbridge Street: the Klinghoffer Carpets showroom at 734-38 Bainbridge, and the vacant lot across the street at 739-41 Bainbridge, where the company’s one-story warehouse stood until recently. Volpe is asking for variances to build single family row homes on each lot because both properties (and the entire block) are zoned CMX-2, which mandates using the first floor for a store or office. The historically commercial Bainbridge Street is one block south of South Street and shares the character of a busy urban street.

His application to the ZBA directly contradicts the intent of the zoning, which is designed to create small-scale residential and commercial mixed use. It states that the current commercial use “is inappropriate in this largely residential neighborhood. The proposed use as single family dwellings is more in harmony with the character of the surrounding area.”

Volpe is also requesting a variance for four first floor garages, two facing south at 739-41 Bainbridge, and two directly behind them facing north at 732 and 734 Kater Street. Each of these four garages, although only a single car’s width, could accommodate two cars via a lift system. The other three, on south side of Bainbridge, include a shared garage for six cars that will be accessed from tiny Perth Street, behind the property.

Historian Regina Blaszczyk, a chair of the Bella Vista Neighbors Association, wrote an open letter to the ZBA outlining her concerns about the project. 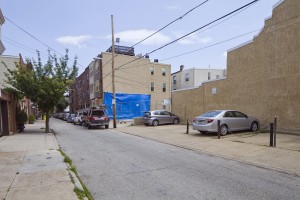 Looking south down Kater Street. Two single family houses with garages facing the street on the ground floor would be built in the lot with the blue tarpaulin | Photo: Peter Woodall

“As a neighborhood, Bella Vista is an ideal place to live without a car,” wrote Blaszczyk. “It would be a shame to upset this balance by granting zone variances that create incentives for multiple car ownership.”

For the developer, garages are a key selling point. “The market demands it,” said Volpe. “I’ve built homes in that area in the past and they were very successful with garages.” Designed by local architect Joseph Serratore, the proposed housing units stand 38 feet tall and feature balconies on the third and fourth floors and a roof deck.

The alternative, according to Volpe, was to build multi-family housing with more than 20 units. “We felt this was the less dense development than doing multi-family homes. In essence, there will be less density by just doing the seven homes.” 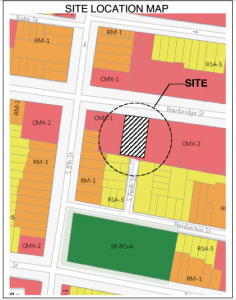 To build the three houses facing north on Bainbridge, the developer will tear down the early 20th century commercial building that’s currently the showroom for Klinghoffer Carpets, a century-old neighborhood business. If demolished, the Klinghoffer building will be the second substantial legacy commercial building lost in Bella Vista recently–a 7-Up bottling plant on Carpenter Street was leveled last year.

The curb cuts–ramps cut into sidewalks that allow for cars to pass easily across the sidewalk into a garage–have drawn the most anger. In the immediate vicinity of this project in the past decade, developers have removed 20 public parking spaces in five years, replaced by private, first floor garages accessed by curb cuts. Often, as in the case of another new row house constructed on the 700 block of Bainbridge Street this year, two public parking spaces are removed to make room for one private garage. Some planners view this as a subsidy for the developer, who will receive a premium for providing the interior parking, while removing a public good–on-street parking.

Lily Properties Development brought the Bainbridge Street plans to the May 13th zoning meeting of the Bella Vista Neighbors Association–a required step before a developer can go to the Zoning Board of Adjustment. Prior to the neighborhood meeting, Lily Properties Development had sought zoning approval for the project, but, by course, the Department of Licenses and Inspections refused it. The parcels are currently zoned for commercial use on the ground floor. 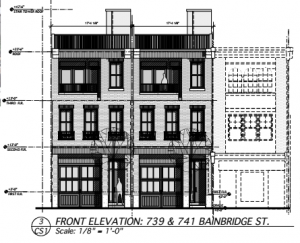 “It was overwhelming opposition to the proposals,” said Jon Geeting, secretary of the Bella Vista Neighbors Association and editor of the online journal Keystone Politics. Geeting cited the curb cuts as a major source of frustration.

Volpe also points out that these garage sites have preexisting curb cuts, and that there are 22 garages within a one-block radius of these homes, so it’s not as if he’s doing anything all that new and different. 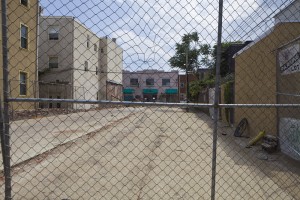 Looking south from Kater through to Bainbridge Street. This is the proposed site of the four single-family homes that would require curb cuts | Photo: Peter Woodall

“In fact,” he said, “we’re adding spots, because on the south side of Bainbridge, there was a loading zone, and we’re giving the parking that the loading zone occupied back to the community.”

Blaszczyk, in her letter to the ZBA, pointed out that–despite these hardship claims–five houses in the nearby area that don’t have private parking sold last year for about $900,000. (Volpe will be asking $1 million for the proposed row houses.) According to the US Census Bureau, 37 percent of households in the area don’t own a car. Some 48 percent own one and just 12 percent own two cars.

Blaszczyk also argues that these garage-equipped homes are detrimental to local business, as curb cuts lead to a decline in foot traffic and discourage businesses from setting up shop in the neighborhood.

Other complaints center on the noise level of the garage system itself, which uses a lift system to fit a second car into what amounts to a single-car width garage, the lack of rear yard space in the plans, and the sheer size of the proposed housing units. (For reference, the plans call for the units to occupy 85 percent of the lots, when only 75 percent is permitted.) 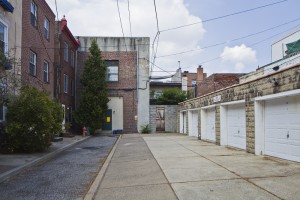 Looking north on Perth Street at the back of the Klinghoffer Carpet showroom that faces Bainbridge Street. This is where the entrance for the shared garage with six spaces would be. | Photo: Peter Woodall

Jason Lempieri, a designer who previously served on the neighborhood’s zoning committee (and who has contributed to the Hidden City Daily), said at the neighborhood meeting he proposed putting the parking below ground. “When you go down six feet and raise up the house three-and-a-half feet, you have room for partially submerged parking,” he told Hidden City, pointing out that the proposed garages are very narrow, and don’t allow for much storage space. “And they said, ‘Well, people want to have their own garages.’ But once you share [parking], you have advantages: you have room for bikes, for strollers, kayaks, recreation, and mechanical equipment. Developers don’t care about this stuff. They want to bring the suburbs to the city and that means that everyone gets their own space.”

The Bainbridge-Perth part of the proposed development has caused additional concern. Perth Street, accessed only by already-small Pemberton Street directly across from Cianfrani Park, dead ends into the back of the Klinghoffer showroom. Thanks to its diminutive size and minimal traffic, it’s used substantially by the children who live on the block. Volpe’s plan will bring six cars down the alley to the garage. Some residents worry about the impact on their quality of life.

“Rather than having a long and narrow driveway to serve the vehicles in this development, our community would prefer that Perth Street serve a better use as a pedestrian walkway,” said Perth Street resident Alan Hatfield, in a statement filed by the Bella Vista Neighbors Association. Hatfield also said that the garages presently on the east side of the block will likely be replaced with residential uses in the future. He worries that approval of more curb cuts and the plan to use Perth Street as a driveway will “set a precedent” for future development.

Volpe, however, remains steadfast in what he deems to be a fair and worthwhile project. “We’re going ahead with what we’ve proposed,” said Volpe, who has never lost in “more than a few” cases before the Zoning Board.