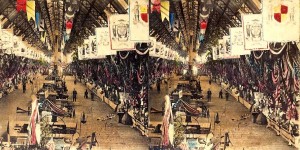 Hand tinted stereoview of Union Avenue by Robert Newell. Although the tinting is not up to the standards of early English genre views, it nonetheless provides an idea of how colorful the gallery actually was. At least four stereo photographers photographed the fair: Robert Newell, A. Watson, John Moran and James Cremer.