This print shows the temporary buildings erected on Logan Square in 1864 for the Great Central Sanitary Fair of Philadelphia. The fairgrounds covered Logan Square in its entirety. The Cathedral of Sts. Peter and Paul (left) and Wills Eye Hospital (right) are in the background. (Library of Congress.)

One hundred and fifty years ago, with the Civil War still being pursued in deadly earnest by the North and the South, the greatest fair Philadelphia had ever seen opened its gates. The thee-week-long “Great Sanitary Fair,” (also called the “Great Central Fair”), kicked off on June 7th, 1864 and raised more than a million dollars to pay for food, medical supplies, hospital ships and rest homes for Union soldiers. It also served as a dress rehearsal for one of the seminal events in Philadelphia’s history, the Centennial Exposition of 1876. 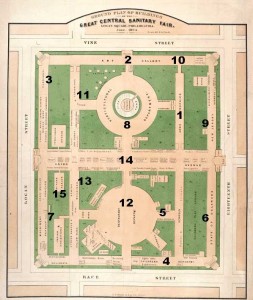 Ground plan of fair buildings (Philadelphia: Printed & Lithogrd. by P. S. Duval & Son, 1864). Logan Street was the original western boundary of Logan Square; the park was expended to the west during work on the Ben Franklin Parkway.  (Library Company of Philadelphia.)

The fairgrounds covered Logan Square (now often called Logan Circle) in its entirety, with the main building extending the length of the block in the center. It was encompassed by smaller structures, all connected by corridors, with many of the same types of exhibits that would be featured at the Centennial: a horticultural exhibit, fine arts gallery and displays of mechanical devices, merchandise, relics and curiosities. There was also a brewery, and a vast restaurant that could seat a thousand people.

This wasn’t yet another of Philadelphia’s firsts—the initial fair was held in Lowell, Massachusetts the year before to benefit the United States Sanitary Commission.The event was a modest success, and the idea soon spread to larger cities, where the events proved tremendously popular. The fairs were the largest and most successful example of what was then a relatively new concept, the charity fundraising event. The premise seems obvious in retrospect, but is slightly counterintuitive: many people would prefer to do something fun in the name of helping those who were less fortunate, rather than simply donating the money directly, which is much more efficient. These events allowed those at home to feel that they were part of the war effort. When Northerners attended fairs, donated goods or money, or volunteered their time, they were actively aiding “their” soldiers at the front.

In this spirit, the Union League of Philadelphia proposed such a fair for the city in 1864. (The club’s Heritage Center currently has a rare copy of the Emancipation Proclamation, signed with Abraham Lincoln’s full signature, one of an edition of about 48 that League members arranged to have printed and sold at the fair). A total of 250,000 people visited the fair in Philadelphia, which was the second most profitable of the 30 fairs that were held.

“Picture Gallery Sanitary Fair, Phila.” Among the artists who had works exhibited were the Moran brothers (John and Thomas), Albert Bierstadt and Thomas Sully.

The lead fundraiser for the fair was John Welsh, brother of William Welsh, a merchant and activist for Native Americans who The Shadow wrote about in the Hidden City Daily last year. However, the fair wouldn’t have turned nearly as much of a profit without the volunteer labor of women of Philadelphia. When Welsh was tapped to raise money for the Centennial Exposition of 1876, he went back to the women he worked with on the sanitary fair, and created a Women’s Centennial Executive Committee.

President Abraham Lincoln was initially lukewarm toward the Sanitary Commission, however as its work progressed he became more enthusiastic. In his impassioned speech on June 16, Lincoln brilliantly delineated the contradictions at the heart of the sanitary fairs, pointing out the strangeness of using a pleasant recreational diversion to indirectly relieve suffering, and noting how doing so might look to the soldiers at front: 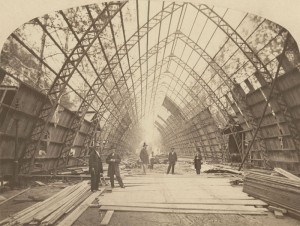 War at the best, is terrible, and this war of ours, in its magnitude and in its duration is one of the most terrible… Yet the war continues, and several relieving coincidents have accompanied it from the very beginning which have not been known, as I understand, or have any knowledge of, in any former wars in the history of the world. The Sanitary Commission, with all its benevolent labors, the Christian Commission, with all its Christian and benevolent labors; and the various places, arrangements, so to speak, and institutions, have contributed to the comfort and relief of the soldiers… And lastly, these fairs, which, I believe, began only last August, if I mistake not, in Chicago, then at Boston, at Cincinnati, Brooklyn, New York, and Baltimore, and those at present held at St. Louis, Pittsburg, and Philadelphia. The motive and object that lie at the bottom of all these are most worthy; for, say what you will, after all, the most is due to the soldier who takes his life in his hands and goes to fight the battles of his country. In what is contributed to his comfort when he passes to and fro, and in what is contributed to him when he is sick and wounded, in whatever shape it comes, whether from the fair and tender hand of woman, or from any other source, it is much, very much. But I think that there is still that which is of as much value to him in the continual reminders he sees in the newspapers that while he is absent he is yet remembered by the loved ones at home. 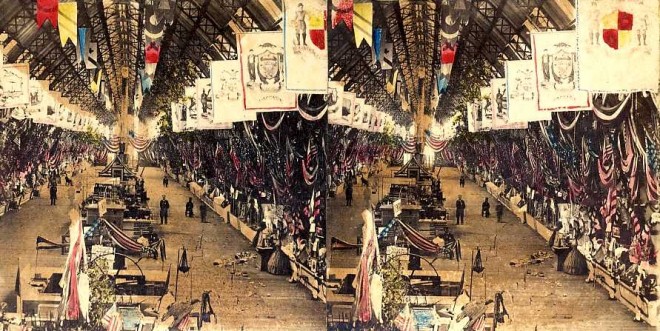 Hand tinted stereoview of Union Avenue by Robert Newell. Although the tinting is not up to the standards of early English genre views, it nonetheless provides an idea of how colorful the gallery actually was. At least four stereo photographers photographed the fair: Robert Newell, A. Watson, John Moran and James Cremer.

The Great Central Sanitary Fair of Philadelphia netted the U.S. Sanitary Commission $1,046,000 by the time it closed. The proceeds were used to promote the health, comfort and efficiency of the solder in the field. During the four years of Civil War, the Commission distributed over $15,000,000 in donated supplies to hospitals, prisons, camps and rest homes, and handled over $5,000,000 in money.

The next time you dash for your life across Logan Circle, recall the days when it hosted the Sanitary Fair of Philadelphia. And think about the day, 150 years ago, when President Lincoln came to visit and spoke the words above.

Much of this piece was gathered for research for my third book: The Benjamin Franklin Parkway (2014). This Arcadia Pub. title is a postcard history book that traces the development of the Parkway and the various institutions along the Parkway through the use of period postcards and other images, followed by explanatory captions. The book is set to be released sometime in July, and should be available in the gift shops of the Parkway attractions, as well as via Amazon.com and other Internet and brick-and-mortar book stores.