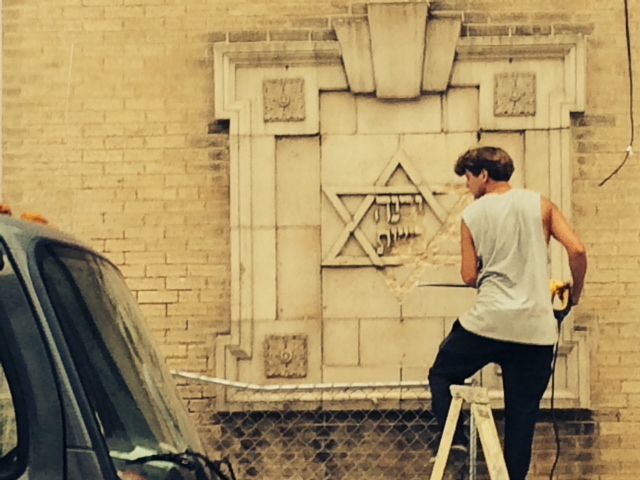 Effective immediately, the former Chevra B’nai Reuben synagogue is decidedly a little less Jewish. The two sizable Stars of David that flanked either side of the main entrance of the building, along with the Hebrew lettering that was only recently revealed beneath the Antiquarian’s Delight sign, were filed off this morning. In the matter of a morning, they’re gone.

Jordan Fetfatzes, of the Fetfatzes family that owns Bella Vista Beer Distributor and Bainbridge Street Barrel House next door to B’Nai Reuben, told Hidden City in April that “[they] never had ideas of knocking it down because of the history and culture it affords.” Having already demolished the murals on the upper floor sanctuary’s vaulted ceiling which depicted the Hebrew months and the mazalot (Zodiac signs)—they rejected multiple Hidden City requests to photograph the murals before they were demolished—they’ve now removed an even more visible part of the building’s history and culture. 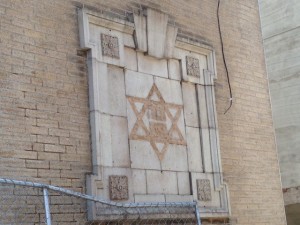 Even filed off, it’s still a Star of David—until it’s replaced by something | Photo: Fran Melmed

When reached by phone this afternoon, Fetfatzes told Hidden City, “I’m not sure what’s going on there, actually. You’ll have to talk to my dad, as this is more his project—and his money,” he said, laughing at the second part. “Yeah it sucks, but there’s a reason for everything.”

Attempts to reach Fetfatzes’ father to do that failed. Finbarr O’Kane, whose O’Kane Construction is one of the contractors on the residential conversion, said that he thought the removal of the iconography was happening in advance of new signs for the apartments.

A menorah remains at the top of the arch above the door, but it’s unclear if that too will be buffed.

Chevra B’Nai Reuben opened in 1905 as Philadelphia’s first Hasidic Jewish congregation. They vacated the building in 1956, in the midst of a postwar wave of congregations leaving the city for the suburbs. For the past several years, the building had been home to the Antiquarian’s Delight, a mishmash mall of vendors selling antiques, collectibles, and in later years, handmade clothes from fashion designers.

While it’s unclear what will take the place of the filed-off Jewish icons, the Fetfatzes hope to have a certificate of occupancy by the end of the summer. The former synagogue will be home to 12 high end apartments. 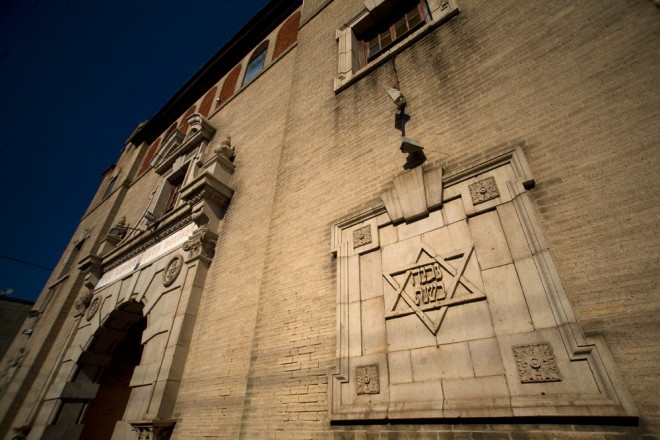