How Can You Know What It Means To Be Here 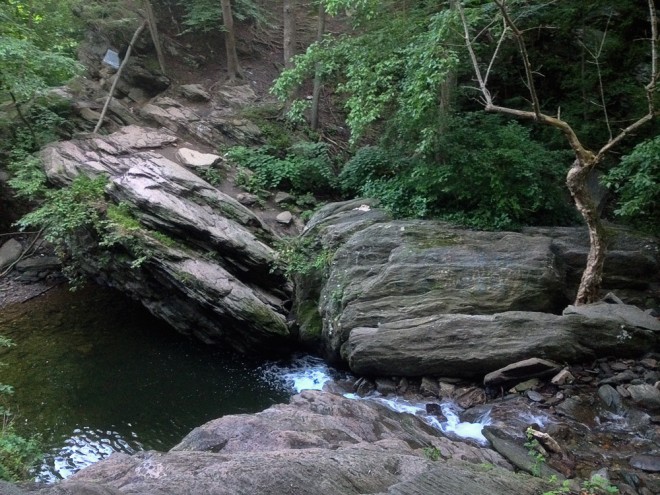 Look past the litter, graffiti, and mayhem, and Devil’s Pool is still a magical place | Photo: Bradley Maule

Since his return to Philadelphia over a year ago, it seems that Hidden City co-editor Bradley Maule has hardly slept. Brad often gets up before dawn, often after a night of socializing, and heads into the woods near his Mount Airy home. One day last week, at 6:15AM, Brad had his first jump off the rock cliff and into the Devil’s Pool. A few days before, he had helped a team of volunteers to free the spot from litter—only to see it smothered in it again 48 hours later. In collaboration with the Friends of the Wissahickon, Brad has been working relentlessly to clean the park through a project, “One Man’s Trash,” he has been recording on Philly Skyline. 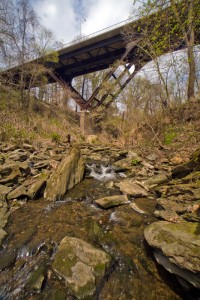 Brad’s love of Philly started with its buildings and architecture, but it’s been confirmed through this immersion in Fairmount Park, the sublime landscape, the mingling hand of man. (Beginning this weekend, in support of the Friends of the Wissahickon and Hidden City, Brad will lead two special hikes in the Wissahickon, details HERE.)

Since at least Edgar Allan Poe’s raft trip down the Wissahickon, Philadelphia writers have taken note of the power and the dangerous beauty of this landscape. One of the most startling recordings is a prose poem history of the Schuylkill River, Flow, by the intuitive and visionary writer of novels and memoirs, Beth Kephart. Temple University Press originally published Flow in 2007; now it has brought out a new edition. This is sensory ecological urban history, told with wit and utter despair, as I noted in a review of the original edition, “a finely-tuned and moving work of art, an exquisite book of loss and wanting.” There is no more profound or moving exploration of Philadelphia’s history.

Here is the chapter called “Nostalgia,” in the voice of the river herself:

Every now and then the music will pour down from George’s Hill, as if the musicians are sitting high on the hemlock trees and performing for the birds. Someone sitting on a steamboat or walking along the west canal will remember Bobby Arnold’s Tavern and the catfish that it served, the rum punches and mint juleps, waffles they’d spend a month dreaming of, and not only that, but how, after a long nap following a big meal, they’d all go swimming nude.

And then the storytellers will get around to old Godfrey Schronk and his blessed dip-net, his habit of lifting thousands of fish straight out of their schools. Black-backed catfish and perch and grown-to-fullness shad, the fishing boats latched to the rocks and the seines so heavy it took a mind of strength to lift them.

And someone will say, River don’t give us fish like that anymore.

And I’ll want to say, River’s given more than you ever should have taken.

Kephart, I wrote then, “is a master not only of descriptive memory, but of constructing a vocabulary of existence.”

For those of us whose work it is to characterize place as something alive inside us, such a vocabulary is essential; the search for it obsesses us. What makes a landscape or a building or a street corner or a tree or a slash of graffiti bristle in our hearts? What binds us, beyond personal memory, to physical space?

The poet Stephen Berg, who died twelve days ago, spent his lifetime searching for this glue. Here he is, on 18th Street, in Center City, mid-1990s, in a prose poem called “Burning:”

This is all there is, it is burning, birth death like a palace of leaves, burning, saw dogshit clog my cleated sole scraped it off on a curb then on grass by a tree, then used a twig, the hundred different quartz watches, buttons, displays, black and silver, in the electronics shop across from Pour Vous, Sue’s Fruits and Vegetables with its packed stalls juice machine customers, Rindelaub’s restaurant now nothing but a cheap bakery, even the faeces, even Christ, even the cracked fucked-up pavement under my feet, the gift of its drab heart (pray? should I pray?) burning–these must have told me what I had always known in my prideful terrors, but I can’t say, only God who needs no God can, or insects communicating their next move, or the pulse of a leaf–every building, shopper, car and garbage can erupting with the praise and grace of existence, a kind of delirious grief in gratitude for the possibility of existence, who yearning for who yearning for who, it was weird–instantly I resisted, windowshopped, studied books skirts shoes, watched faces, did my interminable shit-scared cretin philosophy, calculated the feel of bills in my pocket if I had enough for lunch, any appointments?–but it was happening: picture yourself caused by light witnessed by light stated by the throat of light redeemed by light. 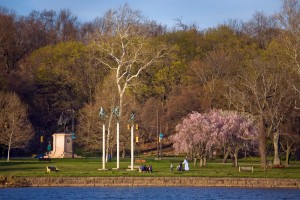 Where once began a poem | Playing Angels (and President Grant) seen from across the Schuylkill in Fairmount Park | Photo: Bradley Maule

As many University of the Arts students know, Berg himself was a raw being, sensitive to both dark and light; he gave back to Philadelphia what the city gave him: pulsing reckless insistence, indeed a kind of delirious grief in gratitude. You’ll find a lot of this in the excellent collection Shaving (with the cover drawing by the late great Sidney Goodman). I’ve always been particularly fond of the poem “On the 33,” about a bus ride from Spring Garden to Center City.

Once, you could find parts of Berg’s poem “Sleeping Woman” on the Schuylkill retaining wall on the east side of Fairmount Park. Berg and his close friend the artist Thomas Chimes, who died in 2009, were commissioned by the Fairmount Park Art Association (now the Association for Public Art) in 1991 to create the poem-sculpture about the river. As soon as the work was completed, a storm destroyed the first 250 foot section of the wall, taking out the first 61 words of the poem. Berg, at Chimes’ insistence, decided to leave the poem as it was, and today it’s almost entirely worn away. (For more on this story, please see an article of mine on Fairmount Park and the nature of the city from Philly Skyline HERE.)

In memory of the great poet and in honor of the park (and Brad’s devotion to it), here is “Sleeping Woman.” Best, on a beautiful day like today, to print it out, find a nice grass expanse, and read it aloud. The poetry, like the river, ought to live on.

how can you know what it means to be here

of two eternities between by white
chrysanthemums scissors hesitate