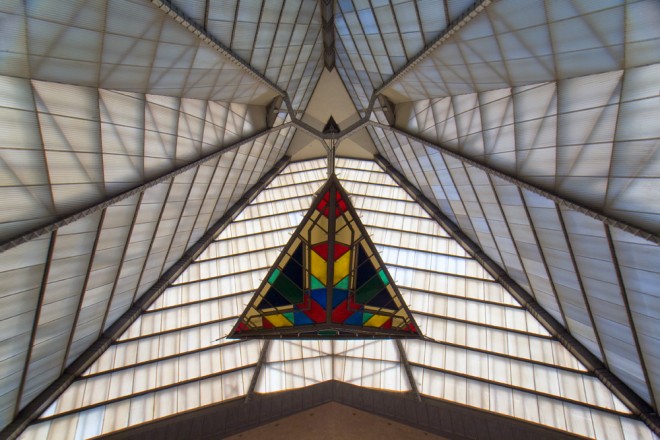 The hues of a plexiglass chandelier over the center of the Main Auditorium amplify Frank Lloyd Wright’s decision to use a glass roof, “since this is to be God’s temple, I prefer to have Him color the glass” | Photo: Bradley Maule

In the Pantheon of American architecture, nary a name exceeds that of Frank Lloyd Wright. Even our own vaunted Frank, Monsieur Furness, must defer stature to that most famous of architects, the subject of many a book, a Ken Burns documentary, a Simon & Garfunkel song. In Philadelphia, we have but one specimen from the master, and to find it requires a trip to the suburbs: Elkins Park’s Beth Sholom Synagogue. 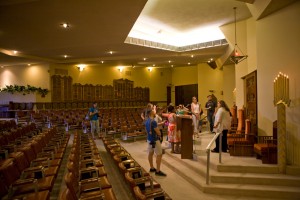 Actually, one can find a second Wright development in Ardmore: the 1939 prototype of the ‘Suntop Homes’ intended for mass production and single-home growth of the suburbs. The development was cut short by World War II and the Suntop Homes damaged by fire and heavily modified in the time since.

But Beth Sholom, Wright’s only synagogue commission, is the real deal. As part of the National Trust for Historic Preservation’s Saving Places week happening across the country—ours is called CityLovePHL—two free tours of the temple were given on Sunday. Additional events, including a free tour of Battle of Germantown site Cliveden this evening, continue through Friday and require only registration and following @savingplaces on Instagram. See HERE for details.

Founded in 1918, the congregation was called Beth Sholom, Hebrew for “House of Peace,” after the end of World War I. Their first temple opened on North Broad Street in Logan in 1919. By the 1950s, with suburban flight in full swing, the congregation sought to do the same, establishing a base in Elkins Park in 1950. The Beth Sholom Center, designed by Israel Demchick, opened in 1951. Rabbi Mortimer Cohen had a vision for a landmark synagogue in which members “feel as if they were resting in the very hands of God.” In 1953, he sold that vision to an 85-year-old Frank Lloyd Wright, winding down his career with a 15-year wrangling with the Solomon R. Guggenheim Foundation to build its museum facing Central Park in New York. 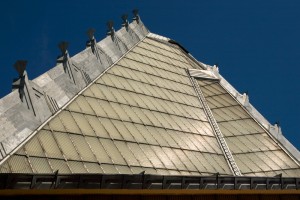 Beth Sholom didn’t face the back-and-forth with a foundation board and concerned neighbors the Guggenheim did, and as such saw completion in a much shorter time and with overwhelming support from Cohen and his congregation. (To see photos of the construction, visit the Beth Sholom Preservation Foundation’s history page HERE.) The building’s dedication and consecration took place in September 1959, five months after Wright’s death—and one month before the Guggenheim’s dedication.

The signature steep sloped roof, made of metal, glass, and plexiglas and mounted on a steel tripod, emulates an “illuminated Mount Sinai.” Its etched and corrugated panels allow for the diffusion of natural light into the Main Sanctuary, situated on the second floor with a slightly sloped floor. Original reddish leather seats provide capacity for up to 1,020 congregants. The geometric details—from door handles to light fixtures to moldings, recall other Wright works, such as his own home Taliesin West in Scottsdale, Arizona. A laver (fountain) in front of the synagogue recalls the ancient lavers in which congregants would wash their hands en route to service. Beth Sholom was added to the National Register of Historic Places in March 2007.

To launch the photo essay, click any of the images below. For best viewing, use your right and left arrows to page through.

Regular tours are given at Beth Sholom Synagogue in Elkins Park on Wednesday, Thursday, and Sunday, and cost $12, and include a 20-minute film narrated by Leonard Nimoy. Take note that tour schedules this summer may be interrupted by construction of a new elevator, so call ahead to be sure. All info regarding tours is HERE.