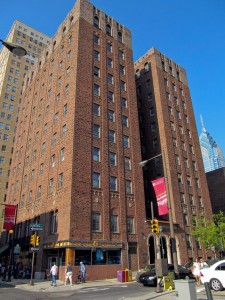 When World War I broke out in 1914, its unprecedented scale and impact in Europe drew relief efforts from cities and towns throughout the United States. In Philadelphia, which had no local chapter of the Red Cross, a group of eight women banded together to create the Emergency Aid Committee, soon after renamed the Emergency Aid of Pennsylvania (EAP). Under the leadership of Mary Brown Warburton, wife of the publisher of the Philadelphia Evening Telegraph, this volunteer organization formed with the mission of “carry[ing] on both at home and abroad, emergency and relief work for the benefit of the military forces and the civilian populations of the United States and of their Allies.” The group was the first organization in Philadelphia to send relief supplies to Europe, organizing drives for food, clothing, fabric, and money to send to soldiers and civilians abroad.

In the early years after its founding, the Emergency Aid of Pennsylvania was headquartered in the home of George H. McFadden, at 1428 Walnut Street. It remained based there throughout the war, although the organization’s multiplying boards necessitated new arrangements as the war went on. A new subcommittee formed almost as quickly as each new country was drawn into the war, until there were eventually task forces dedicated to Armenia, Belgium, Britain, the Fatherless Children of France, Italy, Montenegro, Poland, Romania, Russia, Serbia, and Home Relief (for American war relief). A German Committee contributed toward the relief of Germans and Austrians until relations between Germany and the United States disintegrated, at which point that committee was disbanded.

These boards existed in addition to EAP’s other programs to assist the war and relief efforts. The Allied Arts Committee formed to send money (a total of $6,000) and supplies to European artists suffering because of the war. Closer to home, the Americanization Committee organized educational propaganda campaigns at city recreation centers in neighborhoods with residents that could be “most easily influenced by disloyal rumor, and where the foreign population predominated.” A “patriotic program” was held at Starr Garden at Italian-centric Sixth and Lombard Streets on July 4, 1918, and on July 19 and 26, meetings were organized at playgrounds in the city’s Polish enclaves. The committee also organized gatherings in a German neighborhood (August 2, 1918) and another Italian community (August 9, 1918). The Americanization Committee was also responsible for the “Loyalty” posters that were distributed throughout Pennsylvania and endorsed by State and Federal organizations. 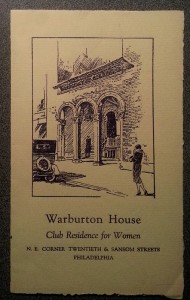 Cover, Warburton House booklet, We*.99 v.2 | Used with permission of the Historical Society of Pennsylvania.

EAP also had a Chocolate and Jam Committee (for distribution to the soldiers that docked in Philadelphia, as well as the front and hospitals in Europe), a Tobacco Fund (supplied to convalescent hospitals in the United States and abroad), an Emergency Aid Shop at 1501 Walnut Street, and a Service Wool Shop, which operated at the Ritz-Carlton Hotel for 17 months. (For more information on the prolific activities and committees of the EAP, see the chapter on the Emergency Aid of Pennsylvania in the book Philadelphia in the World War, 1914-1919, published in 1922 for the Philadelphia War History Committee.)

Over the course of the war, sixteen buildings in Philadelphia were lent in part or in full to the service of the Emergency Aid, including property owned by such prominent Philadelphians as John Wanamaker, Charles Stuart Wood Packard (of the Pennsylvania Company for Insurance on Lives), Joseph Widener, Helen Fleisher, and Edward Stotesbury. This borrowed space was necessary for the organization’s activities, especially once other chapters were established in Pittsburgh and other cities and towns in Pennsylvania. By the time the armistice was signed in November 1918, the organization had grown so much that it needed a larger headquarters, so in 1919, EAP moved its headquarters to 1524 Walnut Street.

The end of the war necessitated other changes for the Emergency Aid of Pennsylvania. Because the organization was well-funded and well-organized, its Executive Committee chose to refocus the group’s mission rather than disband. EAP was incorporated and expanded its services to address issues on the domestic front, including the influenza outbreak of 1919. A year later, Mary Brown Warburton was elected president of the organization, ushering the club into the 1920s.

In 1924, as the Emergency Aid celebrated the 10th anniversary of its founding, the organization chose to construct a women’s building to commemorate its history and serve its ongoing mission. The decision coincided with the city’s preparations for the Sesqui-Centennial International Exposition, which was awarded to Philadelphia in 1921 and held in 1926 to mark the 150th anniversary of the signing of the Declaration of Independence. (The chair of that exposition’s Women’s Department, J. Willis Martin, was also on the board of the Emergency Aid of Pennsylvania.) Anticipating that event and its thousands of visitors—single women in particular—the Emergency Aid passed a resolution to establish a hotel building (which would also house EAP’s headquarters) to accommodate women residents or visitors to Philadelphia. 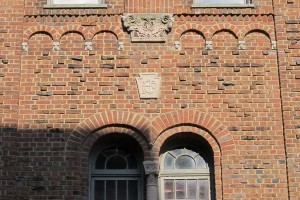 This targeted audience reflects the societal shifts toward women in the late 19th and early 20th Centuries. A few decades earlier, the popularity of Grand Tours to Europe and the establishment of large department stores in Europe and the United States eased societal restrictions against women going out in public without chaperones. By the early 20th Century, as the women’s suffrage movement gained traction and new women’s clubs were formed around the United States, women increasingly traveled without social repercussions. Their accommodations, however, remained a delicate social situation, as large hotels were still considered inappropriate for the single woman traveler. To fill this need, organizations such as the Young Women’s Christian Association (YWCA) and other clubs offered short-term housing to single women in large cities. Constructed between 1901 and 1903, the Women’s Hotel (now the Martha Washington Hotel) in New York City was the first grand hotel in the United States built exclusively for women. Two decades later, the Emergency Aid of Pennsylvania built the first such hotel in Philadelphia.

The Emergency Aid selected a site just a block from Rittenhouse Square at 20th and Sansom Streets. Having just completed a high-profile, critically-praised design for a men’s club, New York-based architect Arthur Loomis Harmon received the commission. Harmon had worked for nine years in the office of McKim, Mead and White, one of the most prominent architecture firms of early 20th Century America. After a short period in the firm of Wallis & Goodwillie, he practiced independently for 15 years. Harmon’s Shelton Hotel (now the New York Marriott East Side), located at 525 Lexington Avenue, was profiled in the February 1924 issue of The Architect, around the time that EAP passed its resolution to construct what they would call the Warburton House. Both buildings employ the Italian Renaissance Revival style of architecture, with prominent arched loggias at the ground level and a piano nobile (“noble floor” or “noble level”) at the second floor that is accented by arched window openings and decorative iron balustrades.

The Warburton House is no replica of the Shelton Hotel, however. The building’s exterior includes several nods to its own unique origins, beginning with the cast-stone inscription over its Sansom Street entrance that reads “Emergency Aid Building.” In addition, several decorative cast-stone keystones (a nod to both the organization’s name and the building’s location) are aligned between the piano nobile and the third floor, with the intertwined letters “EAP” on each stone.

On the interior, this “pleasant centre for visitors from everywhere” featured 200 bedrooms, as well as lounges, reception rooms, a ballroom, a solarium, a library, laundry and sewing rooms, and a restaurant and cafeteria that were open to the public. The building also featured an auditorium (with a seating capacity of 250) on the top floor and rooftop gardens for guests and their friends. (Men were not allowed in guest rooms but were permitted in the dining rooms, lounges, auditorium, and roof gardens.) The building has always kept several storefronts at the ground floor, and in keeping with the building’s roots as a project of the Emergency Aid of Pennsylvania, the Warburton House also included several meeting rooms and offices intended specifically for use by women’s organizations. 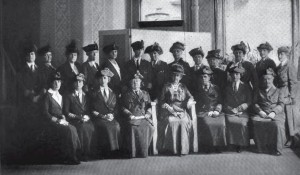 Bedrooms and suites could be reserved by the day or by the week. When the building opened in 1927, a single room with running water (as opposed to a private bath) could be had for $2.50 a day, while a double room with private bath cost $5.00 per day. Dressing rooms with baths, meanwhile, could be rented by the hour to allow out-of-town visitors to freshen their toilette before evening events. Each dressing table “[boasted] many and mysterious bottles containing all the artifices so necessary to every woman’s toilet,” while the baths were “shining white with Aladdin-like wall-paper.”

When it officially opened on February 1, 1927, the Warburton House was glowingly received in Philadelphia. (Reporters did not hesitate to list the other names considered for the project, including the Cathedral, the Aquarium, the Hen House, and the Church House, before organizers settled on the Warburton House, in honor of former EAP President Mary Brown Warburton.) One newspaper noted that this “girls’ club” was solving the “fussy date problem,” since the introduction of the hotel’s dressing rooms and lounges meant that respectable women and working girls no longer needed to tolerate “breathless rides home in a crowded trolley and still more breathless dashes back to town.” Instead, the Warburton House was “the magic combination which has solved one of flapperdom’s most perplexing problems.”

Harmon, the building’s architect, went on to join the New York City architecture firm of Shreve and Lamb in 1929. Two years later—and just four years after the completion of the Warburton House—Shreve, Lamb and Harmon’s design for the Empire State Building became the icon of the New York City skyline. The firm was also responsible for the Art Deco apartment buildings at 740 Park Avenue and 500 Fifth Avenue, as well as well as several prominent commercial buildings. 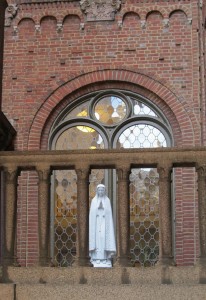 Since 1952, the Virgin Mother has welcomed visitors to 20th & Sansom | Photo: Molly Lester

For nearly two decades, the Emergency Aid of Pennsylvania owned and operated the Warburton House, even as it continued its other charitable initiatives for women and children. In May of 1943, the organization moved its headquarters once more to 1629 Locust Street and sold the Warburton House to the Warburton Hotel Corporation, which continued to operate the building as a hotel. In the summer of 1952, however, the building was sold to the Dominican House of Retreats and Catholic Guild, who renamed the building the Lucy Eaton Smith Residence (after the founder of the Dominican congregation of St. Catherine de Ricci) and installed several Catholic features, including the statue of the Virgin Mother within the Sansom Street loggia. Under the Guild’s ownership, the building continued to offer longterm accommodations to single women for another 50 years.

In 2003, after 76 years as a women-only residence, the Warburton House finally admitted men. That year, the building was purchased by Project HOME and rehabbed as permanent supportive housing for individuals and families. They renamed the building Kate’s Place for Catherine McAuley, an Irish Catholic laywoman who founded the Sisters of Mercy. In 2005, Capogiro converted the ground-floor storefronts along 20th Street into gelato heaven, solidifying the current tenants, use, and form of the building. Today, the building’s exterior gives subtle clues to its origins and owners, but there are few overt indications that this building is a social and architectural landmark in Philadelphia that was commissioned, inhabited, and managed by women.

Research for this article was drawn from a number of sources, including the National Register Nomination for Warburton House (NR 2002), which was prepared by Karen Arnold.