End Of The Road For Atonement (UPDATED) 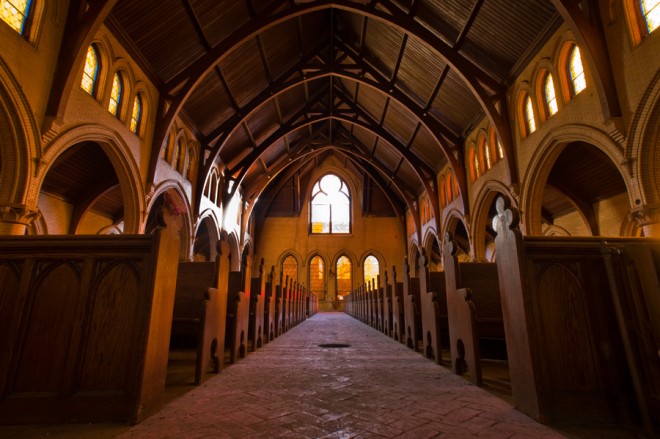 Dust to dust: central aisle of the Church of the Atonement sanctuary | Photo: Bradley Maule

On Friday, City Paper staffer (and former Hidden City contributor) Ryan Briggs reported on the impending demolition of the Protestant Episcopal Church of the Atonement in Southwest Philadelphia (or West Philadelphia, depending on whether you use Baltimore Avenue or the SEPTA Elwyn Line as the boundary). The Department of Licenses and Inspections told Briggs demolition would begin yesterday, Monday, June 9. 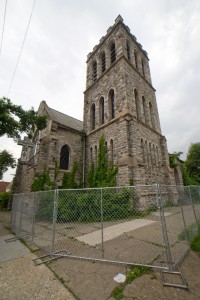 As reported by Christopher Mote for Hidden City last year, the church has occupied the southwest corner of 47th Street and Kingsessing Avenue since 1900. It was built to replace the former parish at 17th and Summer Streets, where the Church of the Atonement was founded in 1847, and has been known as St. Peter’s Church of Christ since 1979.

The church’s design came from the office of Furness, Evans & Co., the final iteration of Frank Furness’ architecture firm, which continued under that name until 1932—twenty years after his death. As Furness goes, the church is relatively understated from the outside, even compared to the parish house next door, completed in 1892. Michael Lewis, author of Frank Furness: Architecture and the Violent Mind (2001), has a theory on the church, which does not appear in the book.

“You’re correct that it doesn’t look like Furness in his prime, as the earlier parish house does,” Lewis said via email from Berlin. “By [1900] the office was big enough that other architects on his staff could develop projects based on Furness’s guidance and advice; I think this is clearly one of those.”

A photograph of the church does appear, however, in an earlier book Lewis co-authored, Frank Furness: The Complete Works, Revised Edition (1996). And, he added, the Philadelphia Inquirer published an illustration on January 8, 1900, credited to Furness, Evans & Co.

The church’s composition is at its best inside the vaulted main chapel, particularly when the early morning and late afternoon light casts a golden hue over the congregation. Stained glass windows by Franz Mayer & Company of Munich, Germany, bookend the front and back of the nave. 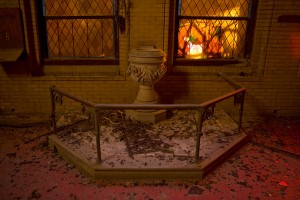 The holy water font has been littered from years of crashing stained glass | Photo: Bradley Maule

As of 5pm yesterday, only a non-secured chain link fence placed around the base of the tower on the corner of 47th & Kingsessing indicated any sign of demolition activity. No L&I notices were visible on the building’s exterior, and one that had previously been posted on the Kingsessing-side doors were removed, leaving adhesive behind. Briggs’ City Paper story reported that Sprint removed their cell phone equipment from the tower last week.

A homemade sign on pink paper posted to telephone poles surrounding the church asked neighbors to “Please help our neighborhood! … Based on recent events involving L&I, the city and demolition (The Salvation Army, Elena’s Soul lounge on 49th and Baltimore and most recently Hoops Deli on 42nd and Chester) we are concerned that the work be done with proper care and under proper supervision.” The unsigned note continued, asking residents to make their presence known and “hang around, observe the process and visibly take photos.”

Several attempts to reach L&I for comment, to determine when the demolition would start if not yesterday, whether anything would be salvaged, and which contractor would be handling the demolition, proved unsuccessful. Hidden City was told all press requests must now go directly through Commissioner Carlton Williams, per his order. Two phone calls and two emails to him went unreturned. UPDATE: An L&I spokesperson confirms that, after the court order calling for demolition, the agency will move forward with those plans as soon as Sprint has finished removing its equipment, which includes cell phone mechanisms inside the tower in addition to the equipment already removed from the roof. Once that has finished, L&I will bid the demolition out, and once contracts are lined up, demolition will begin.

The most recent violation posted to L&I’s web site was for unsecured access to a vacant building on February 25. The entry was updated March 31 with “clean and seal.”

In early 2013, a Celtic cross crashed to the sidewalk on 47th Street overnight, fortunately injuring no one. Several support columns inside the church had severe cracks, and entire portions of the floor had caved in. St. Peter’s Church of Christ’s congregation still meets in the parish house next door.

Across 47th Street from Atonement stands the Crusaders for Christ Church, built as the Fourth Presbyterian Church in 1897 with a design from Hazlehurst & Huckel. That church is in active use and appears to be in decent shape.

For a photo essay of Church of the Atonement’s deteriorated state from April 2013, see HERE.