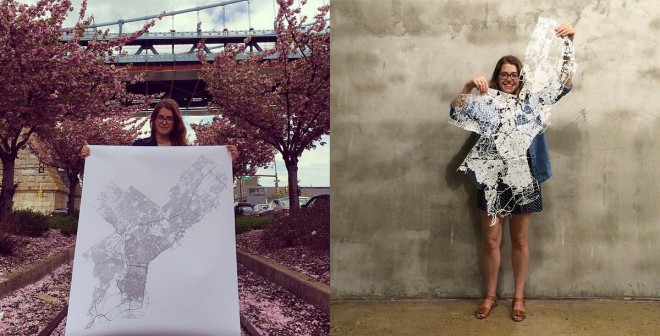 Before & after: Emma Fried-Cassorla with her quintessentially Philadelphian creation | Images via @phillylovenotes

For the past two years, Emma Fried-Cassorla has opened her heart to her hometown. Philly Love Notes began with her quest to find new ways to love her native city, and it shrewdly evolved into a blog whose content is generated by other people fulfilling her quest. (This writer contributed Love Note #200—to the PSFS Building—and Daily co-editor Nathaniel Popkin’s, Love Note #104, honored the American sycamore tree.) 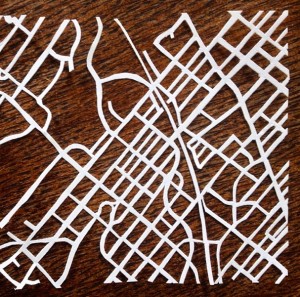 In the past six months, she’s decompressed from her various responsibilities—including a day job as the communications manager for the Delaware River Waterfront Corporation—by making teeny tiny cuts with an X-acto knife. Her love for Philadelphia became geographic, as she made postcard-sized paper cuts of neighborhoods for people quick enough to raise their hand when she asked who wanted one. (I earned myself a 4″ x 6″ Mt Airy.)

Developing a passion for the craft to match her ambition of creating a major prize and major work of art, she decided to create a paper cut of the entire city. Now complete after six weeks of work, she’s giving it away.

Fried-Cassorla’s extremely delicate paper cut of Philadelphia’s massive system of streets, railways, and parks measures three feet by three-and-a-half feet (3′ x 3.5′), so be ready to take those measurements to your local lumber yard. In the map’s creation, largely spent in the coworking space at Indy Hall, she went through 85 X-acto blades in an estimated 250 hours of work, and, she adds, “one bottle of Art in the Age’s Sage to celebrate.”

Now complete, she’s giving it away in a contest. To enter? All you need to do is create your own love note—to your favorite building, park, sculpture, neighborhood hero… whatever inspires you. [And what do you know, in doing so, she’s building a stock of content.)

Fried-Cassorla plans on drawing the winner in two weeks, Monday, June 23rd, from a hat full of the names of contest entries—printed and cut by hand with an X-acto. For details on how to win this unique work of art, visit her blog HERE.

Then, after you’ve won it, be sure to show up at the next #whyilovephilly party, which she’s co-hosting with her employers to preview their latest creation, Spruce Street Harbor Park, a reimagining of the Penn’s Landing Marina into a popup park with a restaurant, bar, and lots and lots of hammocks on the Delaware Riverfront. Buy a $10 ticket to the #whyilovephilly party HERE.