In Port Richmond, Boxing Lives On

The Boxing Hall of Fame is in Conastota, New York, but here in Philly we have a shrine to fighters created by boxers themselves. The Veteran Boxers Association clubhouse in Port Richmond is a bar that doubles as a homemade museum of boxing memorabilia, its walls covered from floor to ceiling with historic photos and fight posters.

A group of retired boxers founded the VBA in a tap room at 10th and Arch Streets back in 1935 to provide much the same thing as other, less exclusive fraternal organizations–a bar to socialize in, and, in the beginning at least, a connection to a job, occasional financial assistance and even small pensions for fighters down on their luck. The need was there–most fighters didn’t earn much, and even those who did rarely held onto their money for long–and soon the VBA spread to a number of other states. In 1963, fighters created a national organization.

The Philadelphia Chapter–known as Ring One–made its first permanent home in the vicinity of 5th and Girard. Maps from the period show unidentified clubhouses on Lawrence and Leithgow Streets, within a block of that intersection, but we haven’t been to track down an exact location. The organization then moved to Tasker Street in South Philadelphia, and seven years ago set up shop in an old VFW Hall on Clearfield Street, which seems like an appropriate home base for these veterans of the Philly ring wars.

Boxing’s popularity has been in eclipse for a long time now, but the VBA has managed to stick around, and has become a repository for Philly fight history and culture. In recent years, the group lobbied and raised money for the statue of South Philadelphia middleweight champ Joey Giardello that was installed in 2011 at the intersection of 13th, Passyunk and Mifflin.

There’s a great chance for non-boxers to visit tomorrow night when the Young Friends of the Preservation Alliance host a Happy Hour. You can register HERE. It’s part of the National Trust for Historic Preservation’s CityLove PHL week. 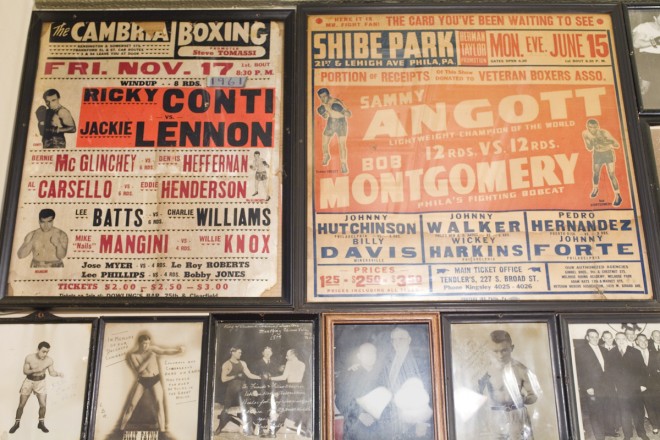 Fight posters for two of Philadelphia’s legendary lost venues, at left from 1961, at right from 1942. Shibe Park was of course home to the Athletics and Phillies, but it also hosted more than a hundred fight cards before being torn down in 1976. | Photo: Peter Woodall

The Cambria opened its doors in 1917 and somehow squeezed in 2000 people at capacity. The building is still standing but is now two separate properties: the front entrance on Kensington Avenue, now the New Cambria Restaurant, and the auditorium behind it that faces Ruth Street, now an auto garage. It was advertised back in 1926 as the “College of Hard Knocks,” but its nickname among locals was the “Kensington Blood Pit.” The Cambria was the last of Philly’s smaller, neighborhood fight clubs, and according to one account was the oldest in the nation when it closed in the early 1960s. 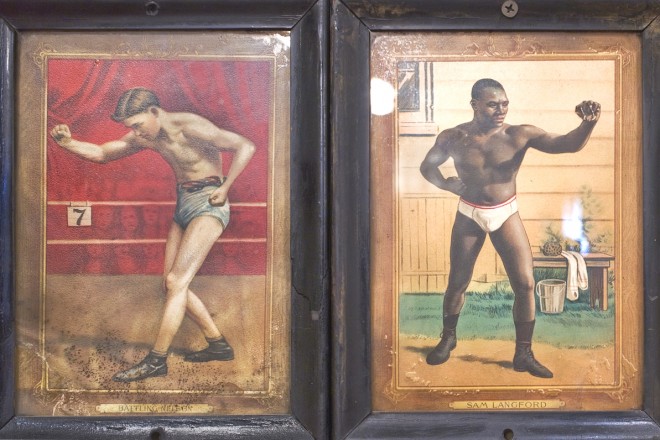 Battling Nelson, once world champion as a Lightweight, received a small pension from the Chicago chapter of the VBA after declining eyesight caused him to lose his job with the postal service. Sam Langford, one of the all-time great heavyweights, also fell into dire straits after his career was over. He was blind and destitute when a 1944 New York Herald Tribune article about his plight brought in $10,000 from his fans. 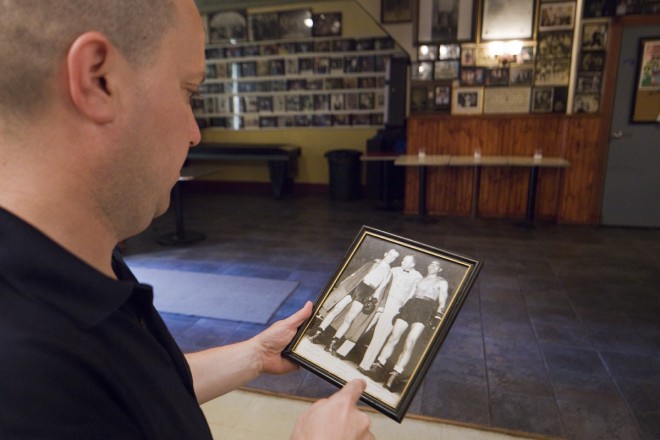 Fred Druding, Jr. showing us a photo of John Gallagher at left and Charles Sgrillo at right. They faced off in the ring and now are Treasurer and Preisdent of the VBA respectively. 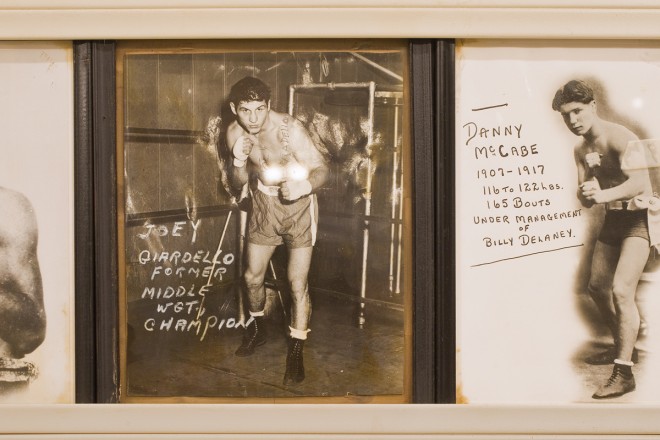 The Philadelphia VBA was instrumental in getting a statue of Joey Giardello erected in South Philadelphia. The group felt it was important to honor a real boxer, not just the fictional Rocky Balboa. 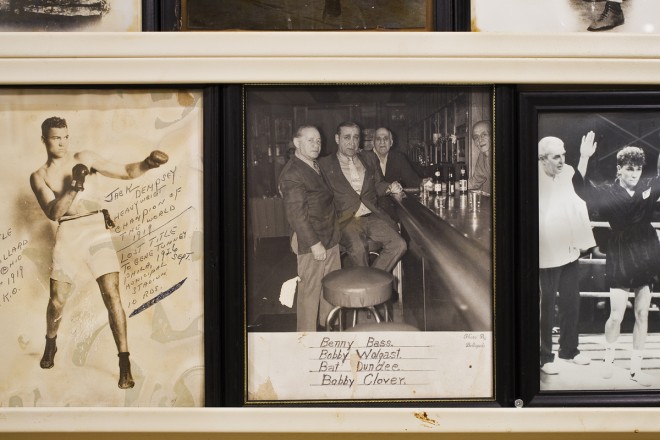 This circa 1950s photo may have been taken inside the Veteran Boxers Association’s first clubhouse, near 5th and Girard.