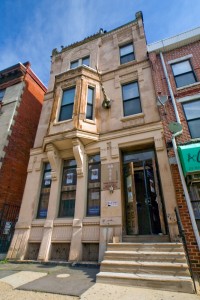 In the mid 1870s, the segment of Girard Avenue between Broad and the Schuylkill River emerged as somewhere important. Though first settled in the 1840s, this stretch took on a heightened role following the construction of the Girard Avenue Bridge and the extension of trolley lines. In the era before the automobile, residences with proximity to transportation corridors were desired; not only for convenience of travel, but for maximum visibility toward showcasing one’s prominent mansion.

In our City of Neighborhoods, where class and ethnicity created distinctly separate enclaves, this particular one filled out by nouveau riche of German descent. In the 1880s, block after block was redeveloped, replacing the modest homes of the earlier English and Scottish Girard Avenue settlers with the mansions of German-American industrialists, bankers, doctors, and lawyers. While each of these row-mansions has a story to tell, some stand out from the rest. In the middle of one such block stands 1421 West Girard Avenue, the enigma of the bunch.

This three-story home between Broad and 15th Streets remains unique among its fancifully-decorated row-mansion peers. Its façade is decorated with pretty much everything you can think of: graphic rosettes, realistic floral sculpture, and a combination of both light and bulky design elements. Up top, a highly-decorated stone cornice supports a highly-decorated copper cornice.

Unfortunately, the hastiness of speculative home building along this corridor in the 1880s has obscured the wonderful home’s origin. Its architect and precise construction date have been lost to history, but plenty of clues exist. The industrialists of German descent who commissioned the mansions on these blocks tended to hire only a handful of architects. Among these, only one was known to design houses with wacky façades like this: your friend and mine, Willis Gaylord Hale. And hey, the grand row of mansions directly across the street is attributed to Hale; William Weightman, Hale’s chief patron, developed the block in the 1880s. Hale also designed the Widener Mansion that once stood at the northwest corner of Broad and Girard, at the end of the same block as 1421. On top of all that, just look at it. What other Philadelphia architect of the 1880s is known for throwing together so many styles with such abandon? 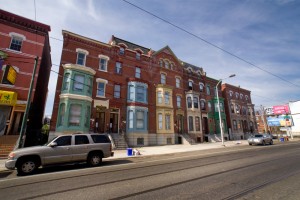 Directly across the street: homes by Hale | Photo: Bradley Maule

Something that is known about the history of this building is its list of many occupants. In keeping with the status of the corridor, 1421 West Girard started its life as the home and office of a series of medical doctors.

Dr. Henry Beates, Jr. first made the stately 3,840 square foot home a live-work space. The Philadelphia-born doctor was already well known in his profession while still a medical student at the University of Pennsylvania. After Beates graduated as a Medical Doctor at age 23, he established a private practice that he brought with him to 1421 West Girard in 1888. Beates’ expertise was so well-known that in 1894, Governor Robert Pattison appointed him to the State Board of Medical Examiners. Several ensuing governors of the commonwealth kept him on the board. After moving to 1504 Walnut in 1898, Beates made it his mission to elevate the standards for medical training. He saw a threat created by the ersatz medical schools popping up all over the country and handing out medical degrees on the cheap, so he spent the rest of his life fighting to maintain the highest quality of education in his profession. 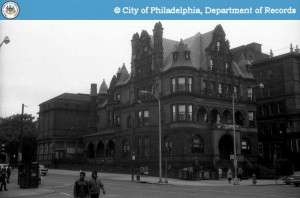 Willis G. Hale’s Widener Mansion, circa 1963. Now occupying the site are both a KFC and a Checkers—each with a drive-thru. | Photo: PhillyHistory.org

Back at 1421 West Girard, his doctor’s offices found their next tenant in Dr. Daniel W. Fleming. A member of the city’s Board of Education and the Pharmaceutical Board, Fleming only inhabited the house for four years. Paul Felsberg, MD did the honors next, before his tragic death in an Atlantic City train wreck in October 1906. Dr. George C. Keiffer, a first generation Luxembourgian-American from a prominent family in the old country-city, then took the torch. As a young man, Keiffer served as a surgeon in the Civil War.

By 1914, the house had come into the possession of the Weaver family, who made use of the property for the next four decades. Dr. William A. Weaver, Sr. a well-established Homeopathic Physician, ran a general practice out of the mansion. His son, William Jr., moved into 1421 West Girard with the family as a small child and grew up to become a doctor as well, studying at his father’s alma mater, Hahnemann Medical College. The school, named after the creator of homeopathy, Samuel Hahnemann, started as a strictly homeopathic college but by the 1910s point focused more on general practice, with homeopathic leanings.

After graduation, William Jr. shared the family’s practice with his father for the eight years until the elder’s death in 1941. After serving in World War II for four years, William Jr. chose to pursue homeopathic medicine further, taking a postgraduate course offered by the American Foundation of Homeopathy. When he returned, he converted the family’s general practice into one of homeopathy and became prominent in that field, bridging the gap between homeopathic and orthodox medicine. Dr. Weaver moved himself and his practice out to Bala Cynwyd in 1958. He later became president of the Pennsylvania State Homeopathic Society and was active in both the American Homeopathic Society and the Germantown Homeopathic Society.

Before he sold the house, Weaver had all the interior walls on the first floor removed so that the home would be more salable as a meeting hall rather than a private home. Later that year, 1421 West Girard was purchased by one B.E. Williams Jr., who divided the remaining residential space on the upper floors into apartments. The building soon became a Kingdom Hall of Jehovah’s Witnesses, an identity it would retain for the next three decades. 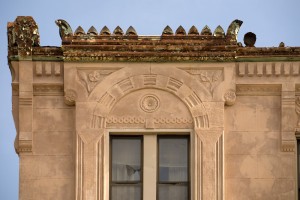 In 1984, the current owners of the property, the Minority Arts Resource Council, acquired the building for $35,000. MARC is a nonprofit organization that provides opportunities for minority artists and craftspersons. They make use of the building to this day. Currently, the reelection campaign of State Representative Curtis Thomas has taken up space alongside MARC, sharing the large ground floor with a giant painting of Marian Anderson, a stone sculpture of Africa, and a watercolor of 1421 West Girard itself.

Though its origins are unknown, no particular danger threatens this great structure’s existence. The building was added to the Philadelphia Register of Historic Places in 1967 and to the National Register of Historic Places in 1985 as part of the Girard Avenue Historic District. And yet, neither nomination provides any clue as to who designed the house. Can we declare it an honorary Hale?