Rohm And Haas: The Plexiglas Palace At 50 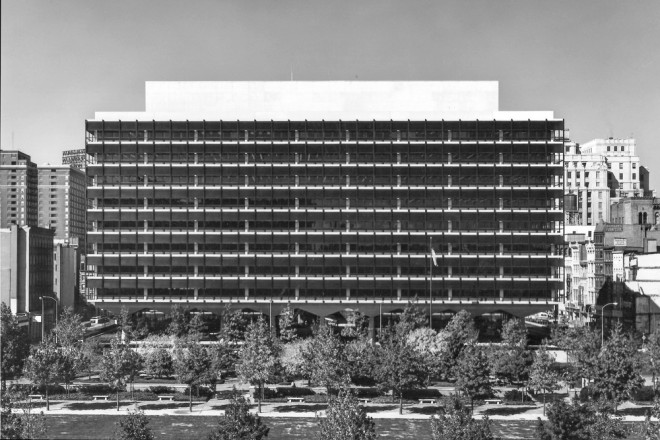 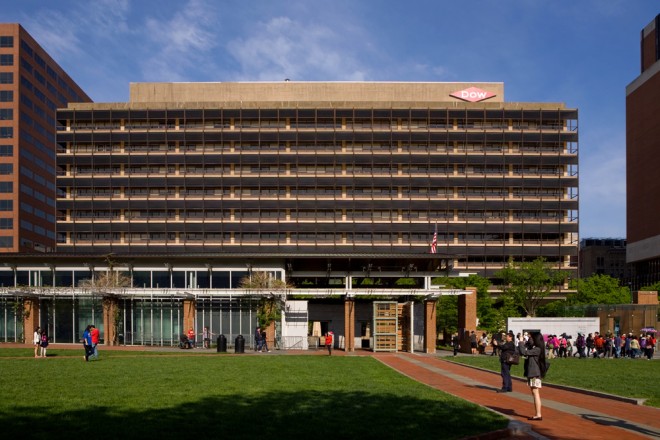 The clearing of three blocks north of Independence Hall in the 1950s meant the wholesale demolition of so much of what made Philadelphia, Philadelphia; it also meant a new, open vista of Independence Hall—and it created parkside real estate for private investment. In the late 1950s, the Rohm and Haas corporation declined the chance to build a sprawling campus headquarters in Fort Washington and instead became the first company to buy in to the new Independence Mall, securing the southwest corner of Sixth and Market Streets. The resulting building, a hulking nine-story concrete structure delicately wrapped in the company’s signature Plexiglas, is now 50 years old, a testament to collaborative design and robust modernism. In that light, the building will receive a Special Recognition Award at the Preservation Alliance for Great Philadelphia’s annual banquet on June 4th.

EwingCole, the large interdisciplinary firm whose portfolio ranges from hospital complexes to stadiums hosting the Super Bowl, draws its very existence back to the Rohm and Haas Building, and with an all-star assist from Italian-born modernist architect Pietro Belluschi to boot. In 1958, Rohm and Haas retained George M. Ewing Company to renovate and provide additions for the company’s headquarters at 700 Locust Street (on Washington Square)—which company President Otto Haas, Sr. saw as most economical. But following his death, and the appointment of his son Otto, Jr. as president, as well as the encouragement of the Philadelphia Redevelopment Authority, the nonprofit Old Philadelphia Development Corporation, Mayor Richardson Dilworth, and planner Ed Bacon, they opted for a bigger, more visible presence on young Independence Mall. 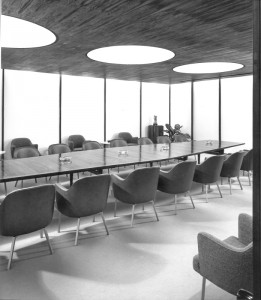 Alexander “Alec” Ewing, George M. Ewing’s youngest son, was partner in his father’s firm and took the lead on the project; Rohm and Haas’ director of facilities and architecture Stanley Cole represented the company. Initially, their design met with a lukewarm response from an Art Commission sensitive to the project’s proximity to Independence Hall and the Liberty Bell. Rohm and Haas’ chief financial officer William McClintock, who’d worked directly with the agencies responsible for bringing the company to the Mall, insisted that a design consultant with an international reputation be added to the project. In 1962, Pietro Belluschi, fresh off a controversial design with Emery Roth and Walter Gropius for New York’s Pan Am Building, and at the time dean of the School of Architecture and Planning at Massachusetts Institute of Technology, became that consultant.

Alec Ewing, now 93, recalls the ensuing collaboration vividly. In a statement prepared for the Preservation Alliance award ceremony, Ewing wrote: “The design proceeded in a true association relationship. Stan [Cole] and I would go to Cambridge, Mass. for critiques from Pietro or he would come to Philadelphia and work with us ‘on the board.’ The process began by my associate Sandy Toland and me developing pre-schematic alternates and Pietro producing his suggested design. Together, we designed an excellent structure.”

One requisite of that excellent structure came from Rohm and Haas directly: the incorporation of the company’s most successful product, Plexiglas. Among a number of chemists in a growing plastic industry, Otto Röhm decades earlier became an expert developing acrylics, and one in particular escalated his company’s trajectory. In 1933, while trying to develop a safer, shatter-resistant glass, Röhm did one better, accidentally creating polymethyl methacrylate, a clear, solid acrylic sheet he trademarked as Plexiglas. By 1936, they had a lab in full operation in Bristol, PA; by World War II, when the US military became its biggest buyer, Plexiglas sales reached into the millions. 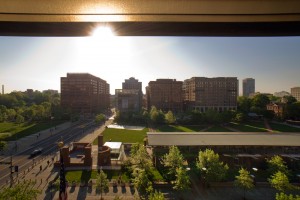 Morning view on Independence Mall: sun shines over the Liberty Bell Center and President’s House— and through the Plexiglas panels on Rohm and Haas | Photo: Bradley Maule

Taking cues from Eero Saarinen’s John Deere World Headquarters, the Ewing-Cole-Belluschi team crafted a series of louvered sun screens made of corrugated Plexiglas to wrap the concrete structure. While Otto Haas, Jr. and his brother John lobbied for a sky blue color, Belluschi suggested that a blue would overpower Independence Hall, and convinced them instead to use an earth tone. The resulting bronze panels appear dark, almost black from Independence Mall, but indeed emit a translucent bronze hue when viewed through the screens in natural sunlight.

Inside the building, Plexiglas proves its versatility on the diaphanous walls of the boardroom, the undulating ceiling of the elevators, and most memorably, in the first floor light fixtures by Hungarian artist György Kepes. Kepes, a contemporary of Belluschi’s at MIT, designed several cruciform-shaped light fixtures featuring hundreds of Plexiglas rods each, a striking design element in the airy lobbies. The lobbies, fashioned of prismoidal concrete forms supporting teak walls with aluminum sconces, are intentionally tall to provide views of Independence Hall.

In addition to diffusing morning sunlight, the exterior’s Plexiglas panels softened the otherwise bulky concrete structure, contrasting with its colonial neighbors in a decidedly subdued fashion. The Haas brothers demanded an excellent, but not flashy, building. Rising nine stories and 157′, the Rohm and Haas Building measures 270’ x 150’ on Independence Mall and Market Street, respectively, with a grand entrance via stairways to a plaza atop a plinth. One of Belluschi’s early recommendations turned the building 90º to maximize the street life of the Mall. Flaring concrete columns frame the large windows of the ground floor, as well as a portal leading to a courtyard connecting to the parking garage next door—a garage designed to withstand the addition of a tower. Had that happened, a footbridge several stories above would have connected the tower with Rohm and Haas. In the extant courtyard, accessed by both Market Street and the portal from Independence Mall, stands an early example of the Redevelopment Authority’s Percent for Art program, Clark Fitz-Gerald’s Milkweed Pod sculpture and fountain. 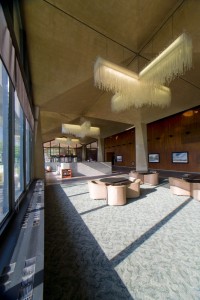 “There’s no doubt in my mind that that building, Rohm and Haas, was the catalyst to EwingCole,” says the firm’s senior vice president Donald Dissinger, a former president of AIA Pennsylvania, who began with EwingCole in 1985 and has become a de facto historian of the company’s evolution. But beyond the simple formation of the company, Dissinger says that the Rohm and Haas project guided the firm’s multi-principled approach.

As the project evolved in the early 1960s, the George M. Ewing Company had plateaued, a successful local family firm. His ambitious son Alec, with whom he remained close, wanted to elevate the firm, and did so by leaving with his father’s blessing, forming his own Alexander Ewing and Associates in 1961. On top of architects, the younger Ewing included engineers, planners, and interior designers in his firm to build on a vision of collaboration. Later, when George M. Ewing Company dissolved, Alec’s company absorbed many of its employees and clients. “It was a gracious transfer,” Dissinger says, underscoring the relationship between father and son.

With the Rohm and Haas Building, the new Ewing company’s collaborative process hit the ground running, with Ewing as project architect, Cole as Rohm and Haas’ project manager, Belluschi as design consultant, and constant input from the company’s executive Haas brothers. Maintaining the relationship fostered during the building’s construction, Cole left Rohm and Haas to join Ewing in 1968, forming the first version of Ewing Cole. With a corporate structure that discouraged nepotism and encouraged constant transitioning leadership, the firm has thusly gone through many changes, with the names Erdman, Rizzio, Eubank, Cherry, Parksy, and Brott suffixed to the parent Ewing Cole.

The current version since 2003, EwingCole keeps its offices in the Federal Reserve Bank of Philadelphia—another product of Ewing-Cole-Belluschi teamwork. Following an encore collaborative project, West Philadelphia’s University Lutheran Church of the Incarnation (which recalls a number of Belluschi’s religious structures, particularly St. Philip Neri Catholic Church in his hometown Portland, Oregon), the Fed needed new facilities for its Philadelphia Region, which serves eastern Pennsylvania, South Jersey, and Delaware. Belluschi, then a consultant for the Federal Reserve Bank in Washington, recommended Ewing Cole for the commission.

Opened in 1976, the Philadelphia Fed represented a government-civilian collaboration, with corporate offices reserved above the government’s floors. For its Percent for Art installation, Alexander Calder created White Cascade, his largest sculpture and thought to be the largest mobile in the world. Ewing Cole moved in in 1979 from 400 Market Street, where the firm had grown since Belluschi joined Alec Ewing and Stan Cole there for late night sessions refining the Rohm and Haas Building.

In the intervening years, EwingCole and its turnaround of executive leadership and varied disciplines has cultivated a diverse client list, from NASA and the West Point Military Prep School to Cooper Hospital and the Phillies. Stan Cole, who passed away last year, served as the firm’s principal architect on Citizens Bank Park, where his longtime friend David Montgomery presides over the stadium’s tenant. 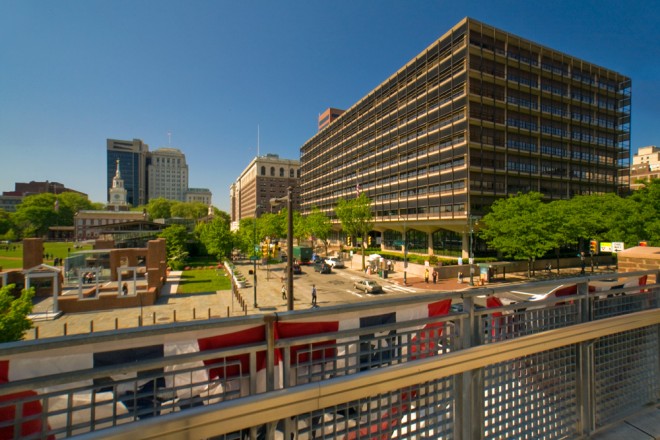 “Representing the first private investment on the Mall, the Rohm & Haas Building was highly regarded by Philadelphia’s city planners, who hoped it would serve as a stimulus to other private investors and set a standard for subsequent redevelopment buildings,” Meredith Clausen writes in her 1999 book, Pietro Belluschi: Modern American Architect. “Applauding its sensitivity to the site and the way it related not only to the fine texture and small scale of Independence Hall but also to the expansive landscaped Mall, architectural critic Wolf Von Eckhardt of the Washington Post, who had only recently decried the Pan Am Building, acclaimed the Rohm and Haas structure as ‘probably the most handsome building in Philadelphia.'”

Indeed, it has aged well. Bucking tradition of waiting at least 50 years for a building’s nomination, Rohm and Haas was added to the National Register of Historic Places in 2007. (In 2009, the Dow Chemical Company purchased Rohm and Haas for $15 billion, and replaced the familiar chemistry flask logo with its own.)

Come this Fourth of July, the structure will engage with the Mall in a way it never has: with beer. Restaurateur Michael Schulson will open Independence Beer Garden in a 30,000 square foot indoor/outdoor space designed by Groundswell, with food from Top Chef contestant Travis Masar, on the plaza directly facing Liberty Bell Center. It’s the latest multitiered collaboration on a site built upon them.

Reflecting on the Rohm and Haas Building’s role in his firm’s foundation, Alec Ewing reminisces over Belluschi’s guidance. “There are very few Pietros in any generation… He fully understood that it takes dozens of well trained and fully experienced architects and engineers to develop the design of a building like this one.”

But ultimately, what’s most important are the lasting relationships formed through projects like Rohm and Haas. “All participants that made this building possible enjoyed and benefited from its development,” Ewing recalls. “It is just as important that hundreds in the building trades constructed it well. A successful architect must have a backup staff and an extraordinary client. Rohm and Haas was the very best.”

To launch the gallery of the Rohm and Haas Building, click any of the photos below.

The author would like to thank Don Dissinger, senior vice president at EwingCole, and Anthony Belluschi, son of Pietro and a consulting architect himself, for their kind assistance.