Dusting The Sand Off Of Philly’s Tiki Heritage 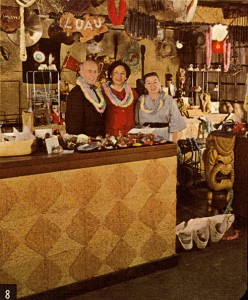 Welcome to our luau: Langerman’s Luau in Narberth | Image via Arkiva Tropika

Last month, a number of local media outlets predicted the “Return of Tiki” in light of plans by PYT owner Tommy Up to open a new bar of that persuasion in Fishtown. Up and business partner Sarah Brown launched a Kickstarter campaign in hopes of securing the $36,700 they need to properly outfit “Philly’s first tiki bar,” at 1444 Frankford Avenue. They must raise the sum in its entirety by tomorrow morning. (As of this writing, they have $2,798 still to raise to meet their goal with 16 hours to go.) The Yachtsman aims to put a 21st Century touch on mid-century Tiki culture—immersive décor by Phoebe Esmon and Christian Gaal of the team’s Emmanuelle nightclub, a menu featuring Hawaiian bar food by Chris Vacca and Kiki Aranita of Poi Dog food truck, and cocktails with names like Rum Runner and Painkiller. But while The Yachtsman will indeed be the first of its kind in decades, it is far from the first. By the late 1960s, at least four Tiki-themed restaurants served the Philadelphia region: Pub Tiki, Kona Kai, Langerman’s Luau, and Hawaiian Cottage.

Although born in California, Tiki did not remain constrained to the Golden State. The concept spread from coast to coast, enabling ordinary Americans to escape to at least a facsimile of paradise. Two business savvy restaurateurs facilitated the spread of Tiki: Vic Bergeron of the Trader Vic empire and Stephen Crane of the Kon Tiki chain; Bergeron often receives credit as the first to franchise the concept, while Crane glamorized it.

According to James Teitelbaum, author of Tiki Road Trip: A Guide to Tiki Culture in North America, Tiki was about escapism. “The best Tiki paradises have a completely escapist environment. Windows are bad because they’re a reminder of the outside world. Television more so. Water features and aquariums are great, tropical plants are great, lots of nautical junk (fishing nets, glass floats, bits of old ships) is always great, and of course a Tiki bar, by definition, has to have as many carvings of Polynesian deity figures as the owners can possibly cram into the room. The best Tiki bars do not have a frat party vibe; they’re tranquil and peaceful with low lights and a romantic adult atmosphere. That’s where most of the new ones get it wrong. Many of the real Tikis from Polynesia are fertility gods after all, so a good Tiki bar should be a place for seduction, not Jaeger bombs and high-fives.”

After a three-decade-long run, Tiki and most of its manifestations (including coffee shops, eateries, bowling alleys, amusement parks, and pleasure gardens) began to decline. Mid-century optimism gradually dissipated as the Civil Rights Movement, the Vietnam War, and the Reagan administration rolled in successively. In addition, increased access to travel opened the South Seas to ordinary Americans wanting to see the real thing and develop an understanding of and sensitivity to the place.

The four establishments that comprised most of the Philadelphia region’s Tiki scene opened and closed in concert with the rise and fall of the trend nationally. The earliest to open in the area, Cherry Hill’s Hawaiian Cottage, opened in 1938 and the last to close, Kona Kai in Bala Cynwyd, did so in 1985. 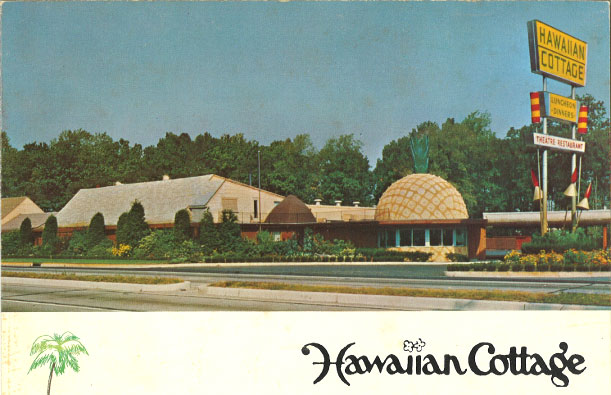 Located on Route 38 in Cherry Hill, NJ, Hawaiian Cottage was a roadhouse owned and operated by couple Michael and Mary Egidi. Upon arrival, patrons of the “theater restaurant,” which featured regular “luau shows,” were greeted by a yellow dome painted to resemble a pineapple and a set of flaming torches.

An undated welcome message from General Manager Joseph Zucci reads: “The lei welcome is traditional in Hawaii. The Hawaiian Cottage takes pleasure in continuing this old Polynesian custom—a colorful lei about your neck symbolic of the friendliness, hospitality, and gaiety of the Islands. Dining is an enjoyable experience, enjoyed amid a romantic setting of palm trees against a background of Hawaiian music and dances of native origin.”

Most notably (and in hindsight perhaps most questionably), the Hawaiian Cottage included a Japanese-themed dining room. The black and white “Geisha Room” featured a prominently situated geisha statue, Japanese-style screens, chandeliers, and custom made mugs by Otagiri Mercantile Company. Otagiri is best known for manufacturing Tiki glassware during the 1950s and 60s.

The black and white mugs used in the Geisha Room each bore a traditionally clad geisha. The others, souvenirs for guests purchasing alcoholic beverages, donned colorful parrots and caricatures of the fictional character Fu Manchu. This was unusual because Tiki establishments typically served drinks in Polynesian gods or Easter Island heads.

Hawaiian Cottage closed in 1978, after a fire destroyed much of the landmark restaurant. An Olive Garden now occupies the site, which lies between Kaighn Avenue (Route 38), Church Road, and Chestnut Street near the Cherry Hill Mall. 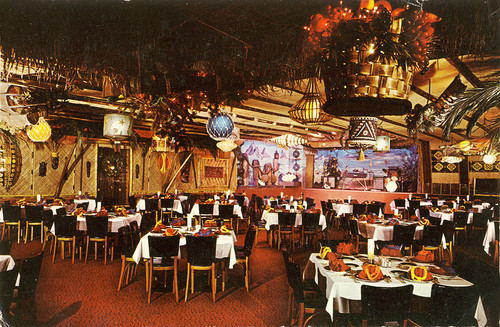 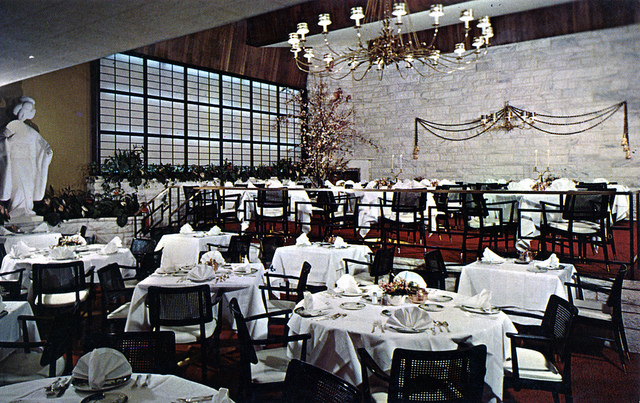 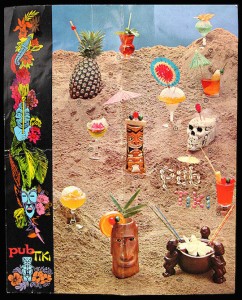 The cover for Pub Tiki’s cocktail menu, whose most expensive drink was a “Floral Tiki Bowl” for two — at $1.55 | Image via Polynesian pop culture site Arkiva Tropika

Pub, the legendary local chain whose Pennsauken, NJ location still greets eastbound drivers off of the Ben Franklin Bridge, once counted a Tiki-themed tavern among its collection. Founded by South Philadelphia native Morris “Duffy” Shoyer, the chain boasted five Pubs—three in Center City, one in North Philadelphia, and one in Pennsauken. The Center City locations included Little Pub at 1421 Sansom Street, Pub at 1522 Chestnut Street, and Pub Tiki at 1718 Walnut Street. North Philadelphia’s Pub was located at the intersection of Hunting Park and Allegheny Avenues in the Allegheny West neighborhood.

When Shoyer died in 1995, the Philadelphia Inquirer remembered him as benevolent history buff who believed that the “average man is entitled to dine in splendor, just as the rich man.” Indeed, Pub Tiki’s patrons dined in style amid a glowing map of the Polynesian Islands and an artificial waterfall. More importantly, it maintained “honorable” prices. Prime rib cost just $3.95 per plate, and each item’s cost was raised no more than one cent per year. Pub Tiki closed in 1977 upon expiration of its lease. For the next 35 years, clothing store Knit Wit, now at 1729 Chestnut, occupied the space; it is now occupied by Intermix, a high end boutique chain based in Manhattan.

The Pub in Pennsauken, loosely Medieval-themed but not touted as such, survives. It has been serving giant steaks and seafood platters since 1951. It is so, so worth a visit. 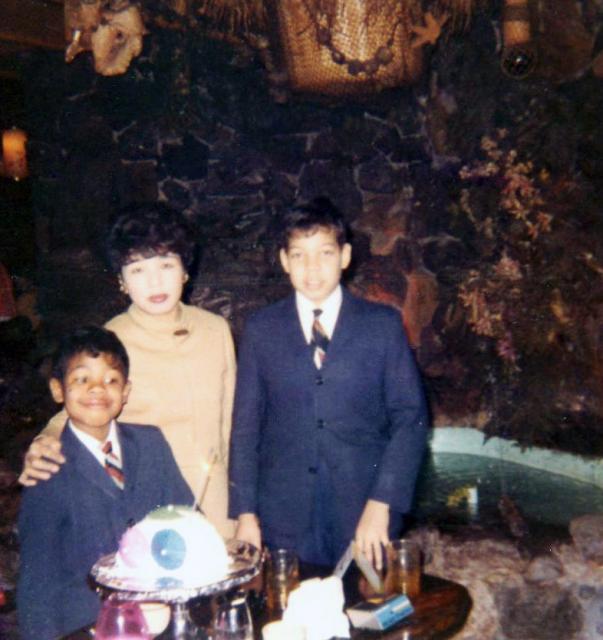 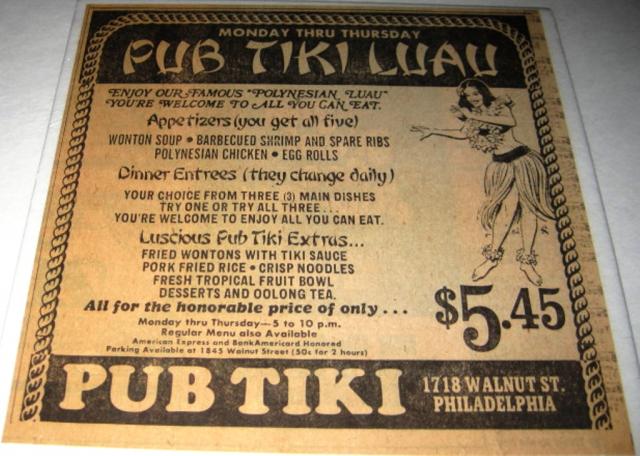 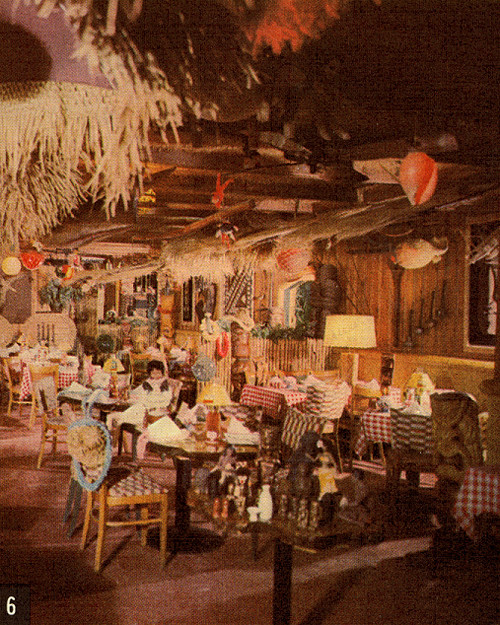 Located at 915 Montgomery Avenue in Narberth, Langerman’s Luau was owned and operated by World War II veteran Harry Langerman. Langerman opened the restaurant (and a second in Atlantic City, NJ) after managing well-known and fondly-remembered Frankie Bradley’s at Juniper and Chancellor Streets, as well as Lew Tendler’s Steak House in Atlantic City.

In a Playboy magazine advertisement, the restaurant’s proprietor paints a picture of its atmosphere: “Picture yourself in the moonlit compound of a native Polynesian village… exotic native drinks in two-foot tall glasses… floating fresh gardenias… mouthwatering Polynesian hors d’oeuvres… a tropical paradise (giant Tiki gods, carved figureheads, glass float balls, swali tapa, outdoor waterfall… even an albatross).” One wishing for this experience could do so by drinking at the restaurant’s Kontiki Bar or dining in the Outrigger Room (the main dining room).

After only nine years, Langerman’s Luau closed. The building that housed it was eventually demolished. A small building containing offices now occupies the site. The Atlantic City location suffered a fate of demolition too. 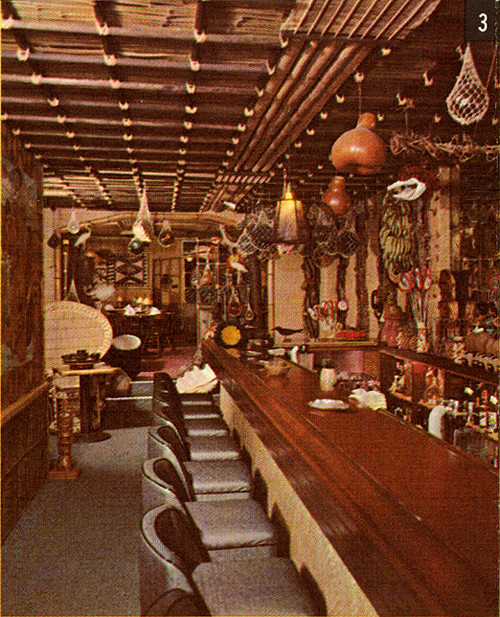 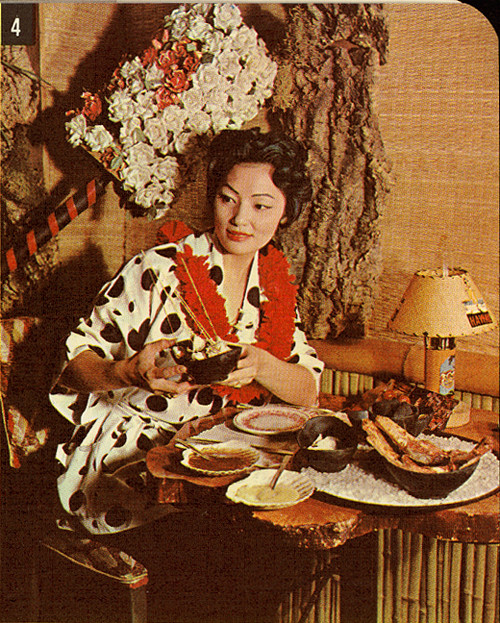 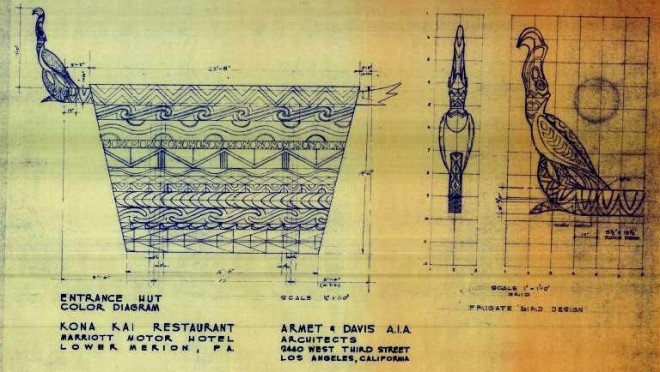 Kona Kai, Philly’s last Tiki bar to open and the last to close, was also the most architecturally significant. Designed from the ground up by the prolific firm of Armét & Davis, the Kona Kai featured a steeply pitched A-frame entry flanked by decorative concrete blocks. The interior included every element one might expect to encounter, including a waterfall that culminated in a winding pond and landscapes painted onto glass.

The Santa Monica-based Armét & Davis, now Armét Davis Newlove Architects, is credited with designing over 4,000 buildings between the United States, Canada, Mexico, and Indonesia. In the 1950s and 60s, the firm proliferated the Googie style of architecture, a mid-century modern style heavily influenced by the car, the airplane, and human’s first forays into space.

In Sven A. Kirsten’s The Book of Tiki, which is as authoritative as the subject gets, the Marriott-run Kona Kai flagship at the mouth of the “Golden Mile” (City Line Avenue at the Schuylkill Expressway) is described as a “true temple of Tiki.” The “Golden Mile” refers to the mile long stretch of City Line Avenue that boasted some of the finest mid-century modern architecture in the Northeast.

Kona Kai, which represented Marriott’s response to Hilton’s alliance with the still-popular Trader Vic empire and Sheraton’s relationship with Kon Tiki, was closed in 1985, not long before its parent Marriott Motor Hotel was demolished in the late 1980s. The site is now occupied by a nondescript office building. 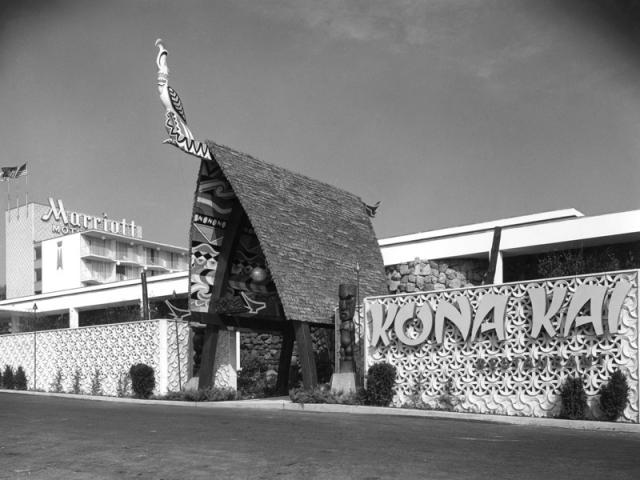 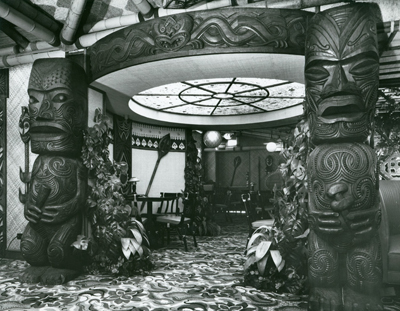 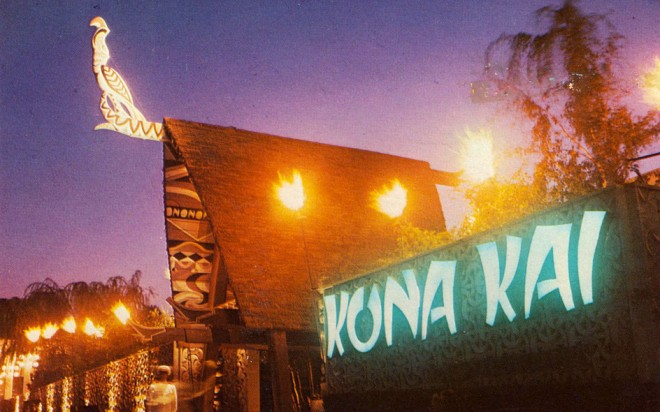 Other Tiki-themed or at least Tiki-related bars included the Bali Hai at 254 South 15th Street—now the parking garage with a Starbucks and Fox & Hound. Another, the Tahiti Bar at 126 South 16th Street, became more famous for a court case weighing nude dancing and liquor licenses than for its mai tais.

Did we miss any? Leave your throwback Tiki bar memories in the comments.