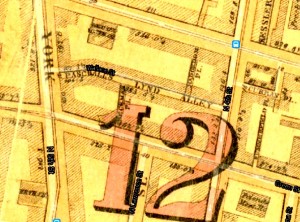 The 400 block of Wallace Street in the southwestern part of Northern Liberties looks about as indistinct and unimportant as a small street can get in Philadelphia. It is one of the many secluded alleys that pass though parts of the city—Northern Liberties in particular. These Belgian-blocked passageways are barely six feet wide and have hand-cut granite curbs. They are very old.

Besides being unkempt and virtually devoid of any houses, this particular block has a history reaching back to before the Civil War when it was a player in the Underground Railroad. In the Antebellum era, it was known as Paschall’s Alley.

The narrow, rutted street runs from Fourth to Fifth Streets between Green Street and Fairmount Avenue, and has an unusual—in Philadelphia, at least—fifteen degree bend as it approaches Fifth Street. (The bend is due to the slanted path of Fifth Street in that vicinity; Fifth Street was originally the Old York Road in that area.) The name Paschall’s Alley was changed to Lynd Street in 1857; about fifty years later, the lane was renamed Wallace Street when it became integrated into that more established east-west thoroughfare. 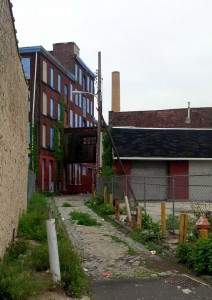 The story begins with the development of the Northern Liberties and the growth of the African American population of Philadelphia. Free African Americans began settling in the district of Northern Liberties as early as the 1790s. Rather than trekking back to Philadelphia for their religious needs, some eighteen black members of St. George’s Methodist Episcopal Church (on Fourth Street in Old City) started holding religious services at their homes in the Liberties. (Some of these residences were surely along Paschall’s Alley.) The group was recognized by St. George’s in 1794 and called itself “African Zoar” (“zoar” means “good will” in Hebrew). Two years later, the congregation purchased property on the north side of Brown Street west of Fourth Street for $570 and erected a place of worship: African Zoar Church.

As Northern Liberties became a center of Philadelphia’s free black community in the early 19th century, African Zoar found itself located in an area not only burgeoning with an African American population, but a zone that was also very active with the fledgling Underground Railroad, the network of secret routes and safe houses used by African slaves to escape to free states and Canada with the aid of abolitionists and allies sympathetic to their cause. 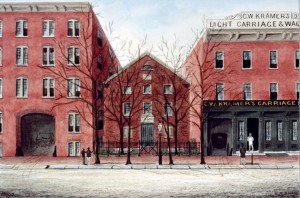 The first African Zoar Methodist Episcopal Church was about two blocks from Paschall’s Alley. This watercolor, by Benjamin R. Evans, shows the church building in 1884, long after the congregation vacated the 1796 building, as it was by then crowded by newer structures. | Print via Library Company of Philadelphia.

Most all of Philadelphia’s Methodist churches had strong ties to the antislavery movement, playing key roles in providing material aid and shelter to fugitive slaves. In the 1830s, African Zoar Church served as both a shelter and a meeting space for the Vigilant Committee, an abolitionist and fugitive aid group founded by some of Philadelphia’s most prominent black leaders: Robert Purvis, William Still, and James Forten.

According to W.E.B. DuBois’ The Philadelphia Negro: A Social Study (Philadelphia, 1899), African American families were mostly crowded into narrow courts and alleys in and around the city, including Paschall’s Alley. By 1848, the alley—today’s derelict 400 block of Wallace Street—contained 48 families with 212 persons, in 28 houses. One house had seven families, with 33 people living in 13 rooms each about eight feet square.

The modest houses on Paschall’s Alley were an integral stop on the Underground Railroad throughout the 1830s and the 1840s. Resident-abolitionists included barbers, bakers, and undertakers, many of whom hid runaways in their homes and doubled as railroad “agents.” These residents were known to open their doors to runaways and the alley became reputed along the Underground Railroad up and down the East Coast. Moreover, the little homes on Paschall’s Alley apparently sheltered more fugitive slaves than any place in Philadelphia.

It follows that Northern Liberties had the largest black population in Philadelphia by the 1850s. The number of African Americans exceeded that of South Philadelphia’s historically black Cedar (South) Street corridor. Northern Liberties later absorbed a post-Civil War influx of southern blacks into its poorest side streets and courtyards. The same occurred after World War I and World War II. 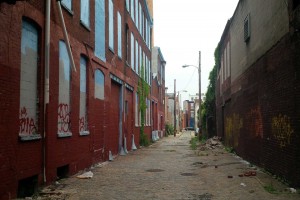 Wallace Street from mid-block, looking east to Fourth Street, with the former (boarded up) manufacturing plant of Henry K. Wampole Pharmaceutical Company on either side. | Photo: Harry Kyriakodis

After the Civil War, Northern Liberties became a hub of industry. Factory owners bought up the little houses and replaced them with workshops. The factory complex of the Henry K. Wampole Pharmaceutical Company eventually came to take up most of both sides of the street.

The Wampole company originated as a unassuming druggists’ outfitting business in a small building near Fourth and Arch Streets in the 1870s, but its rapid growth demanded larger facilities. After moving successively to several locations in Old City, the firm wound up at 424–432 Fairmount Avenue. Wampole soon extended its operations back to Paschall’s Alley and then across the alley to Green Street. These facilities were among the most modern in America for the production of drugs and late-day patent medicines.

The factory is to be converted to 41 apartment units and ground floor retail stores, according to a plan approved this week by the Northern Liberties Neighbors Association.

Among other products, Wampole & Company specialized in Extract of Cod Liver Oil. Considered a breakthrough for the medical industry, this tonic gave doctors (and others) a better way of administering cod liver oil by mixing it with various flavors, including wild cherry. (This may have been the first medicine to be camouflaged with that flavoring.) The following is from Volume 44 of The Buffalo Medical Journal (1888):

Messrs. Henry K. Wampole & Co. of Philadelphia have well-nigh solved this whole problem in furnishing to the profession a preparation in which the oil is so completely disguised as to taste, odor and appearance, that it can be administered to the most delicate person without producing nausea, or other unpleasant after-symptoms. 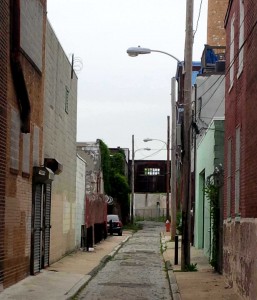 Wallace Street looking west from mid-block, looking towards the bridge overhead and the peculiar bend in the road. | Photo: Harry Kyriakodis

The Extract of Cod Liver tonic came in 16-ounce bottles that were sold for a dollar by druggists just about everywhere. Wampole Laboratories still exists as a Canadian firm and is actually Canada’s oldest pharmaceutical trademark.

Wampole’s buildings were later occupied by Trans-Atlantic Company, a importer and seller of hardware products. A metal walkway, just about over the bend of the road, connects the second floors of the buildings flanking Wallace Street, although it’s uncertain if this was installed by Wampole Pharmaceutical or by Trans-Atlantic. Whatever the case, the bridge appears very dilapidated and seems unsafe.

Meanwhile, African Zoar Methodist Episcopal Church moved to its present location at 1204 Melon Street in 1883, upon finding that its original location had become overcrowded. It would later adopt the appellation “Mother” Zoar because it engendered several other black Methodist congregations. Zoar United Methodist Church is now the oldest African American United Methodist church in America with a continuous existence. The building at Fourth and Brown Streets is gone, replaced first by a furniture factory, and now by houses. A Pennsylvania Historical Marker commemorates that site. 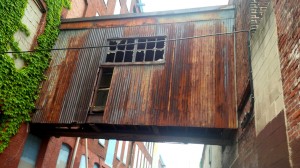 The metal walkway over Wallace Street, connecting the second floors of the buildings on both sides of the street. | Photo: Harry Kyriakodis

Unfortunately, there is no marker to commend Paschall’s Alley/Lynd Street/Wallace Street, or the humble little safe houses that served the Underground Railroad in the 1840s, or even the pharmaceutical activity that came there later.