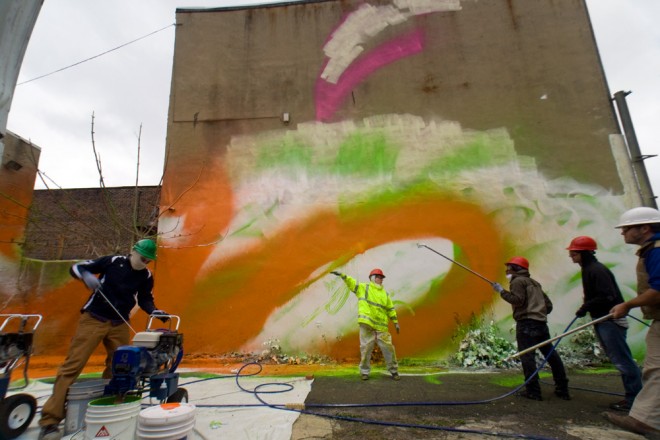 “These goggles are really cool, very fashionable, ja?” Katharina Grosse says in a thick accent. Even in a construction jumpsuit and hardhat, the German artist is image conscious. That’s probably a good thing considering the image she’s produced on the grandest scale of her career is about to be seen by over 30,000 people a day. 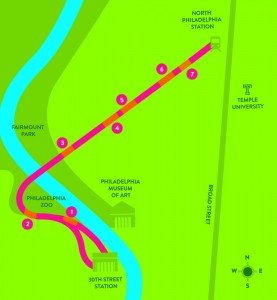 It was very windy in North Philadelphia a couple days ago before the rain set in. After a day training the artists who’ll be painting her project, Grosse had the team in the field at a small shop who allowed use of an exterior wall framing the small parking and truck loading space. (They’d already had their mandatory railway safety training with Amtrak.) The team, consisting of Philadelphia artists and led by crew leader Nathaniel Lee, is learning the ropes of Grosse’s setup: a powered compressor sucking paint from a bucket through a long hose and applying it through an elongated spray gun.

One might call it street art style with industrial strength and institutional backing—on one of street art’s hallowed grounds.

Before New York took the crown and hip hop took it to the masses, graffiti belonged to Philadelphia. As the names Cornbread and Cool Earl emerged out of North and West Philly in the 1960s, tags frequently appeared on railroad corridors. In fact, modern graffiti has always had an inextricable link to trains. It’s easy to picture New York’s tagged up subway cars, the ones made famous by Bruce Davidson’s captivating photos; the boxcars and tankers tagged in urban rail yards always add an extra dash of color to trains traversing the heartland. Even hip hop’s greatest paean to graffiti, by Newark, NJ’s Artifacts, comes from the “Wrong Side of the Tracks.”

Philadelphia’s rail corridors in every corner of the city are veritable showcases of street art, but none is as pronounced and visible as the Northeast Corridor. As Amtrak’s arteries go, the NEC is its aorta, the lifeline between New York and Washington. While Amtrak leases many of the lines it traverses across the country, it owns most of the tracks on the NEC; it’s also its biggest money maker. In Philadelphia, Amtrak shares the NEC with New Jersey Transit (for its Atlantic City Line) and SEPTA (for the Chestnut Hill West and Trenton lines). Between the three agencies, nearly 34,000 riders a day pass through an evolving graffiti hall of fame, with names like Espo and Bob Will Reign, Drama and Tibet, Skrew and the late Nekst—writers who cut their teeth and earned their props on the street.

Given all the outreach they’ve done, especially within the graffiti community, it’s peculiar that the Mural Arts Program will cover up large portions of existing tags—particularly as they celebrate their 30th anniversary. In the book accompanying the anniversary, Mural Arts @ 30, Executive Director Jane Golden explicitly recalls the shift “from an ‘anti-graffiti’ effort to the ‘pro-art’ Mural Arts Program.” While psychylustro isn’t necessarily anti-graffiti, it’s definitely a large, legitimized work of art superseding a vast assortment of smaller ones by unauthorized creators—an art school artist covering up street artists. 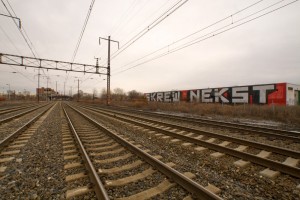 The huge SKREW/NEKST wall on the corridor will not be covered | Photo: Bradley Maule

To a certain extent, Golden is okay with that. “Over time I’ve had to make peace with the fact our murals aren’t here forever—there’s something really transitory about it,” she admits, recognizing that murals are often painted over, demolished, or hidden by new construction. “In one year, we lost David Guinn’s Autumn mural and Tish Ingersoll’s Tuscan Landscape—a number of them I felt emotionally connected to, as did many people. But then I thought to get fixated on that is the wrong thing to think about. Rather, can we do work that’s powerful, evocative, challenging enough so that when it goes away, their memory makes us as Philadelphians clamor for art?”

Recognizing the territory psychylustro was entering, Mural Arts took the time to reach out to graffiti writers to have a conversation about it. “It’s incumbent upon us that, if we’re going into this territory, to be really thoughtful about it,” Golden says. “We had a number of meetings with people who categorize themselves as graffiti artists, and we got a really moving letter from a guy who lives in Atlanta now. He said, ‘you can go over my name, I’m in a different place now doing public commissions.’” The same artist also indicated he’d like to return to Philly and do some work.

Ultimately, the decision to take this immense project onto the tracks was a pragmatic one. Says Golden, “I feel like if you’re a graffiti writer or an artist or a muralist and you’re working in the public realm, you’re taking a chance that someone or something else is going to come and erase your mark.”

That’s true of most murals and most graffiti, but for pyschylustro, whose price tag approaches $300,000 from a collective of funders—Pew Center for Arts and Heritage, National Endowment for the Arts, Knight Foundation, Elizabeth Firestone Graham Foundation, AT&T, Fierce Advocacy Fund, and more—special measures have been taken to ensure graffiti writers don’t return the favor. Judy Hellman, Mural Arts’ Director of Special Projects, indicates that the City’s Anti-Graffiti Network will work in concert with the Mural Arts Program it spawned to remove any tags that might appear on the project, at least for six months. “The thought is that, especially with Amtrak [as a partner], the project will create a new blank canvas that could prove very attractive [to taggers], especially early on,” Hellman says.

Steve Powers, a longtime graffiti writer under the name Espo, created the popular 2009 Love Letter series for Mural Arts. As someone intimately familiar with both worlds—at least one prominent tag of his is still visible on the Northeast Corridor and tours of Love Letter are still given by Mural Arts—he seemed like a good person to discuss pyschylustro and the process. Contacted via email, he wrote, “nobody writing [graffiti] cares and any attempt to make it appear otherwise is click bait.” He did not respond to an additional request for his 23 favorite throwups of the ’90s.

For Grosse, who hails from Berlin, one of the world’s foremost canvases for street art, the project and its conflict come naturally. “Painting over things is so normal to me—I paint over my work all the time,” she says. “But we made sure to keep some of the ‘historic’ tags here.” 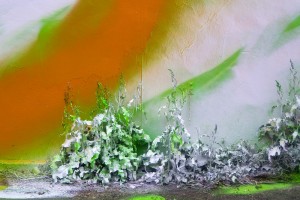 Of the ones they do cover up, most will come back—eventually. The paint chosen for the project is an indoor paint that was okayed by both the Philadelphia Water Department and the Pennsylvania Department of Environmental Protection as non-toxic. And they won’t finish the paint with a sealant, thereby speeding up the natural wear and tear. The paint, a Benjamin Moore acrylic, “has a translucent quality to it,” Golden says. “As it fades over time, layers will come back, revealing what’s underneath.”

But the project isn’t limited strictly to tagged up walls. Where Grosse’s 2003 exterior makeover of Berlinische Galerie colored well outside the lines (and over the windows) of that building’s façades, her 2008 project in post-Katrina New Orleans took the idea a step further, coloring house, porch, fence, and ground. With psychylustro, she’s taking on trains.

As the project unfolds along the Northeast Corridor, expect to see sprayed paint cover not only postindustrial warehouse walls, but also the foundations, ground, railroad ballast—even the weeds and litter present at the time of the painting.

Hellman notes that incorporating the otherwise nuisance materials gets to the heart of the project’s changing nature. “Even just within the space of a couple months, some of the sites will change dramatically from the new growth [of weeds and plants] that will partially block the work and then disappear,” she says.

“My work is actually about things clashing, images colliding that come from contradicting realms,” Grosse says. “I was kind of intrigued that Mural Arts, with a tradition of strictly wall painting that is mostly figurative or narrative, would invite an artist coming from a totally different field. When I realized the scale Jane and Judy were ready to work in, I saw the chance to go for something I have had in mind for a while, which was painting very freely on whatever surface, with enormous scale shifts.

“I believe a painted image can appear everywhere, on one’s thigh, a rock, rubble, soil, a canvas,” Grosse says. “It is like uninhibited thinking in public space.”

Starting today, Grosse and Mural Arts will turn the lack of inhibition into a public exhibition best seen in passing glimpses from moving trains.

To launch a gallery of the Northeast Corridor between North Philadelphia Station and 30th Street Station, click any of the photos below.

Work on psychylustro begins today, with completion targeted for May 16th and official dedication on Saturday, May 17th. The project comes with an audio component in three parts: two tracks of audio produced by Peter Crimmins for Newsworks—one on the history of corridor and another interviewing Katharina Grosse—and a third, rail-oriented sound collage by artist Jesse Kudler. On May 18th, the Philadelphia Museum of Art will host a conversation between Grosse and the PMA’s Curator of Contemporary Art Carlos Basualdo. And on June 18th, WHYY’s Chris Satullo will moderate a panel discussion called Great Gateways and the Cities that Make Them, focusing on the history of this historic rail corridor and other urban gateways.